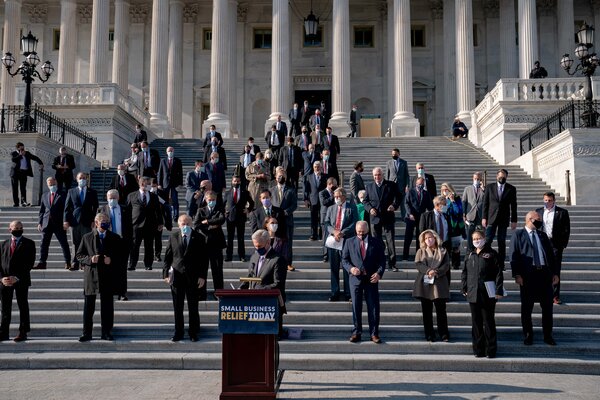 The restarted Paycheck Protection Program allows hard-hit small businesses to get a second government-backed relief loan, but thousands of business owners who are trying to apply have been ensnared by what the Biden administration said are significant errors in the program’s loan records.

P.P.P. loans are guaranteed by the government but made by banks and other lenders. For months, lawmakers and government watchdogs — including the Small Business Administration’s inspector general — have raised alarms about signs of fraud and mistakes that allowed potentially ineligible borrowers to obtain billions of dollars from the aid program.

Those reviewing the program’s loan records, which were released in December after a court ordered they be made public, have also noted that they are rife with errors, like inaccurate loan amounts or loans that were canceled before being disbursed.

The S.B.A. said on Tuesday that it had found “anomalies,” which it described as “mostly data mismatches and eligibility concerns,” in 4.7 percent of the 5.2 million loans made through the program in its initial round of lending, which ended in August.

Those errors have complicated efforts by some borrowers to obtain second-round loans, which the agency began approving two weeks ago, using $284 billion in fresh funding provided by Congress last month to restart the relief program. The S.B.A. said it would provide lenders with additional guidance and resources for resolving troubled cases.

The problems came to light in part because of new fraud checks the agency imposed before it began approving applications for the new funding round.

The agency “is committed to making sure stringent steps are put in place on the front-end and compliance checks address issues more efficiently moving forward so we are ensuring fair and equitable access to small businesses in every community,” said Tami Perriello, the agency’s acting administrator. (President Biden’s nominee to lead the agency, Isabel Guzman, is awaiting her confirmation hearing.)

Lenders said the new process has generally been working, with some glitches. Some banks have had high numbers of applications rejected because of formatting issues and other technical challenges in getting through the S.B.A.’s new automated vetting system, said Dan O’Malley, the chief executive of Numerated, a software company that is handling P.P.P. applications on behalf of more than 100 lenders.

Shelly Ross, the owner of Tales of The Kitty, a cat-sitting business in San Francisco, said she applied last week for a second loan, but was caught in a holding queue. She tried three other lenders, with results ranging from no response to cryptic replies telling her she did not qualify.

“I’m ready to bang my head against a wall,” she said. But others have had better luck: Ms. Ross said a friend of hers got a quick approval on her own loan application through PayPal.