SEOUL, South Korea — The small white delivery trucks zip down streets all over South Korea. The uniformed workers send photos of safely delivered packages to impatient customers. Workers can move so fast, their employer promises, that it calls the service “rocket delivery.”

The trucks and the operation belong to Coupang, a start-up founded by a Harvard Business School dropout that has shaken up shopping in South Korea, an industry long dominated by huge, button-down conglomerates. In a country where people are obsessed with “ppalli ppalli,” or getting things done quickly, Coupang has become a household name by offering “next-day” and even “same-day” and “dawn” delivery of groceries and millions of other items at no extra charge.

The company, which is sometimes called the Amazon of South Korea, is set to get a big endorsement on Thursday from Wall Street. Its shares are expected to begin trading in an initial public offering that will raise $4.2 billion and value the company at about $60 billion, the second-largest American tally for an Asian company after Alibaba Group of China in 2014. On Wednesday its shares were priced at $35, according to a person close to the company.

Coupang may need the money. South Korea’s big conglomerates, called chaebol, and others are building their own delivery networks as Coupang plans its expansion. It faces other issues, too, such as growing concerns about working conditions after the death of several Coupang warehouse and delivery workers that some relatives and labor activists blamed on overwork and poor labor practices.

For the moment, Coupang is South Korea’s biggest e-commerce retailer, its status further cemented by people stuck at home during the pandemic and those in the country who crave faster delivery.

“I won’t go so far as to say I can’t live without Coupang, because there are so many other online shopping options available here fiercely competing with each other, and some of them can be as fast as Coupang or cheaper,” said Kim Su-kyeong, a Coupang shopper and mother in Seoul. “But Coupang has branded itself so well it’s the name that​ first​ comes to my mind when I think of shopping online.”

As Bom Suk Kim, who started Coupang in 2010, likes to say, “Our mission is to create a world where customers wonder ‘How did I ever live without Coupang?’” 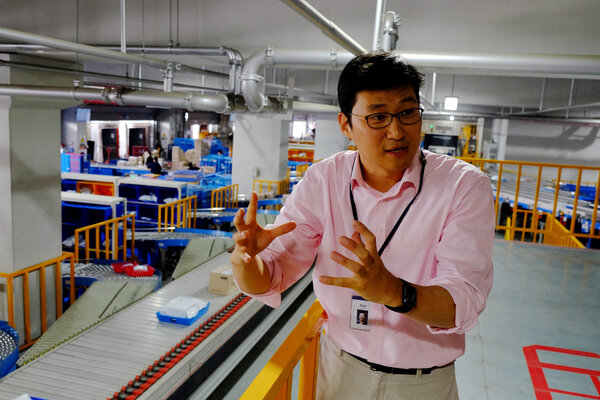 Mr. Kim, 42, ran an unofficial and short-lived Harvard alumni magazine in the United States before returning to his birth country to revolutionize its e-commerce industry. Coupang’s rapid growth was driven by a combination of daring entrepreneurship and branding.

The company’s name is a mix of the English word “coupon” and “pang,” the Korean sound for hitting the jackpot. In an industry where most delivery workers drive around in nondescript trucks wearing drab jackets, Coupang’s fleet of full-time drivers — known as Coupang Men, but recently renamed Coupang Friends — wear bright uniforms and cruise around in branded, company-issued vehicles.

“Coupang has grown fast by meeting two most important needs of customers: cheap prices and fast delivery,” said Ju Yoon-hwang, a professor of distribution management at Jangan University. “Coupang also offers more goods than competitors, so consumers believe they can find anything on Coupang.”

Only a few start-ups — like Naver, South Korea’s dominant web portal and search engine, and Kakao, its leading messaging app and online bank — have been as successful as Coupang. But Naver and Kakao are both listed in South Korea. Mr. Kim took Coupang to Wall Street aiming to court bigger investors and a higher valuation that would allow his company to eclipse its rivals back home.

South Korea is one of the world’s fastest-growing e-commerce markets, projected to become the third largest in the world this year, behind​ only​ China and the United States. Its volume, valued at $128 billion last year, is expected to reach $206 billion by 2024, according to Euromonitor International, a market research company.

And it is ideal for e-commerce. About 52 million people live in the country, a vast majority of them in densely populated ​cities. Nearly every home has high-speed internet, and people pay taxes and gas bills with smartphones.

Long before e-commerce arrived, South Korea already had a vibrant delivery culture. ​Families placed phone calls to get their food delivered around the clock. Dry-clean workers climbed stairs in apartment buildings to deliver freshly pressed clothes. Motorbike couriers ferried documents, flowers and whatnot from one ​district to another.

When Coupang began its “rocket delivery” service in 2014, it set off a price and delivery war. It has since built its own network of logistics hubs, with 70 percent of the population now living within seven miles of a Coupang logistics center, according to the company. The company says it uses machine learning to predict demand and stockpile goods at warehouses. It also runs its own fleet of 15,000 full-time Coupang Friend couriers.

Analysts said Coupang has borrowed from Amazon’s playbook by seeking to become a dominant market force before turning a profit​. The company’s revenues almost doubled last year to $12 billion. But its massive investments in its logistics network, made possible by the funding from foreign investors like Japan’s SoftBank and its Vision Fund, has kept ​it in the red. Its annual net loss ballooned to $1 billion in 2018 before narrowing to $475 million last year.

It recently introduced Coupang Eats, a meal-delivery service, and Coupang Play, a video streaming app. But unlike Amazon, Coupang doesn’t have other businesses, like cloud computing, that can easily generate the cash needed for big expansions. And rivals are putting up fierce competition.

Some of ​the chaebol, the family-controlled conglomerates that dominate the economy, ​are expanding their e-commerce business, especially Lotte and Shinsegae, which operate the country’s biggest department store and shopping mall chains. So is Naver, ​which is ​​already an e-commerce giant.

As competition heats up, superfast ​delivery is quickly becoming the new norm, weakening the novelty of Coupang’s “rocket delivery” service.

Coupang has also faced scrutiny over its labor practices. Former Coupang workers and labor activists accuse the company of exploiting its warehouse workers in its mad rush to turn around orders as fast as possible.

As the number of workers doubled, the number of people who suffered from work-related injuries or illnesses at Coupang and its warehouses jumped to 982 in 2020 from 515 in 2019, according to government data.

“Coupang is an inhumane company that treats its workers like slaves or machine parts, squeezing them until the last drop,” said Park Mi-sook, whose son, Jang Deok-joon, died of a heart attack last October, shortly after returning home from an overnight shift at a Coupang warehouse. His death was ruled a work-related incident, and Coupang has since apologized.

Coupang has denied mistreating its workers. Last year alone, it said, it invested $443 million in the automation of its warehouses and increased its warehouse work force by 78 percent, to 28,400, to make its workers more efficient and lessen the workload.

“What has made Coupang’s rocket delivery possible was its massive employment and investment,” the company said in a statement.

And it continues to pitch itself as an essential service for busy South Koreans.

In a letter to potential investors, Mr. Kim put forward an example of a quintessential Coupang shopper: a working mother who, late at night, realizes she has forgotten to go shopping, and then places an order online through Coupang.

“When she opens her eyes, it’s like Christmas morning,” wrote Mr. Kim. “The order is waiting at her front door.”