LONDON (Reuters) – World stocks rose on Friday as expectations grew of further stimulus by central banks, offsetting worries about slowing economic growth, which intensified this week as the U.S. yield curve inverted for the first time since 2007.

European shares rebounded from six-month lows, with the pan-European STOXX 600 index over 1% higher.

A technical glitch delayed the start of trading of the UK’s benchmark FTSE 100 and midcap stock indexes for almost two hours. It was the longest outage at one of the world’s top stock markets in eight years.[.EU]

MSCI’s All Country World Index, which tracks equities across 47 countries, was up 0.2% on the day. It was still set for its third straight losing week, down 2.2%.

Stocks took a beating this week after the U.S. yield curve — the spread between yields on U.S. 10-year and 2-year Treasury bonds — inverted for the first time since 2007. Inversions typically precede recessions in the United States, so the yield curve is a closely watched economic barometer.

“There are plenty of risks to keep investors on edge, from the ongoing trade dispute between the U.S. and China to the potential for a no-deal Brexit,” strategists at UBS wrote. The uncertainty has undermined economies, they said, noting that Germany gross domestic product shrank in the second quarter.

Economies have suffered as the U.S.-China trade war intensified. Beijing on Thursday vowing to counter the latest round of U.S. tariffs on $300 billion of Chinese goods.

With no settlement in sight, investors have hedged against a global slowdown by buying bonds. Yields on 30-year debt dropped to a record low 1.916% on Thursday, leaving them down 27 basis points for the week, the sharpest decline since mid-2012. 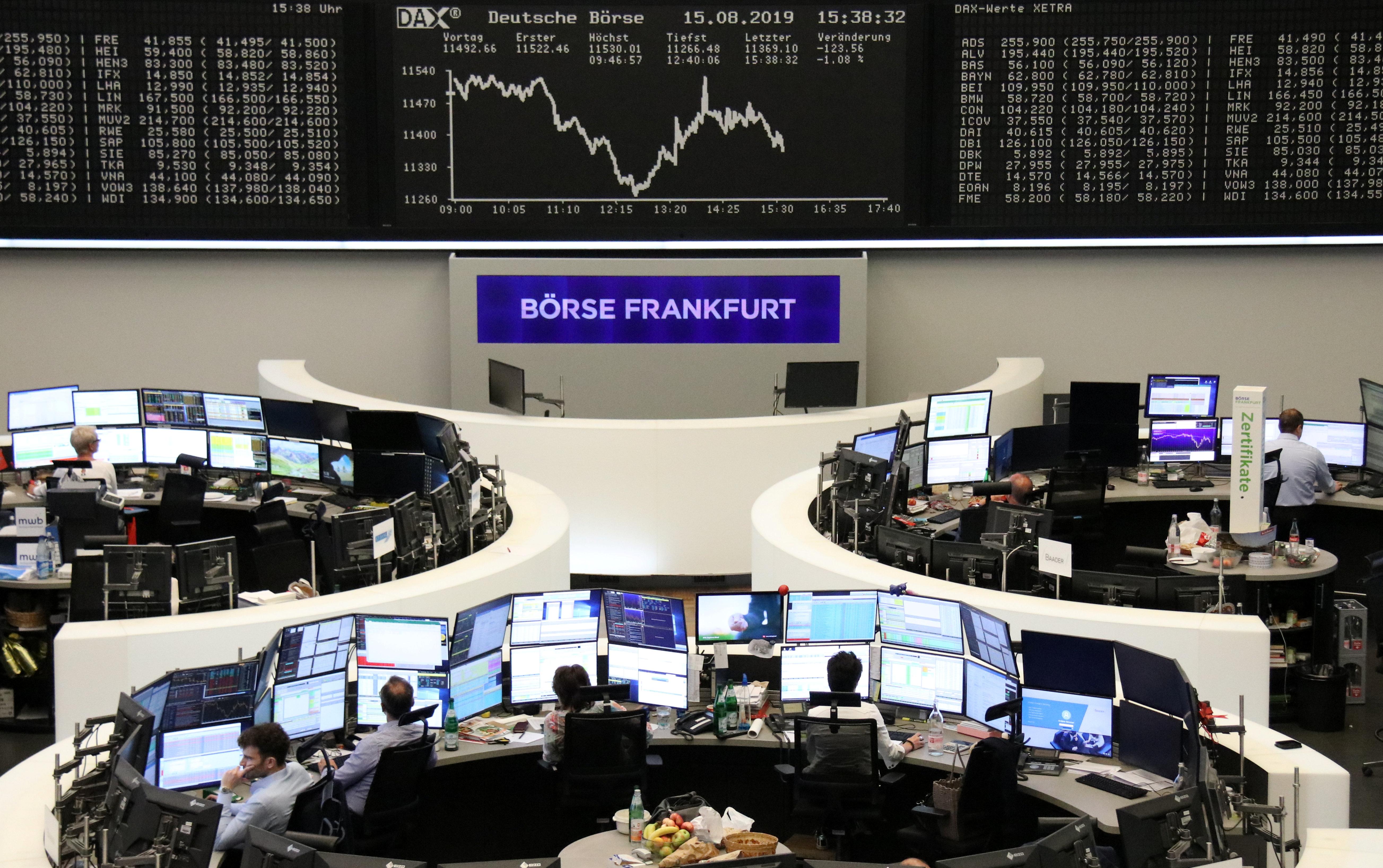 That meant investors were willing to lend the government money for three decades for less than the overnight rate. Surprisingly strong U.S. retail sales had no effect on the bond rally.

Some analysts say the current bond market is a different beast than past markets and might not be sending a true recession signal.

“The bond market may have got it wrong this time, but we would not dismiss the latest recession signals on grounds of distortions,” said Simon MacAdam, global economist at Capital Economics.

“Rather, it is of some comfort for the world economy that unlike all previous U.S. yield curve inversions, the Fed has already begun loosening monetary policy this time.”

STIMULUS ON THE WAY

Futures imply one chance in three the Federal Reserve will cut rates by 50 basis points at its September meeting, and see rates reaching just 1% by the end of next year. And the European Central Bank’s Olli Rehn on Thursday flagged the need for easing in September.

Markets anticipate a cut in the ECB’s deposit rate of at least 10 basis points and a resumption of bond buying, sending German 10-year bund yields to a record low of ‑0.71%. [GVD/EUR]

“The underlying concern and drivers such as a recession and the expectation for an aggressive policy response, fueled by Rehn’s comments yesterday, has given the bond market another boost at already elevated levels,” said Commerzbank rates strategist Rainer Guntermann.

Mexico overnight became the latest country to surprise with a rate cut, the first in five years.

Canada’s yield curve inverted by the most in nearly two decades, putting pressure on the Bank of Canada to act..