Here are two surprising facts which between them help explain why the UK steel industry seems to be in what looks like a perma-slump.

The first is that in the past two years (to be precise, the past 22 months) China has manufactured more steel than Britain has since the height of the Industrial Revolution in 1870.

Try, if you can, to get your head round that.

In the months since the last general election China has produced more steel than Britain – the country where modern steel manufacturing was invented – has produced. Ever.

This fact is all the more startling when you note that until relatively recently China didn’t actually make all that much steel and used to get most of its steel from overseas.

But over the past 20 years it has ramped up steel production to astonishing levels.

Last year alone it produced just shy of a billion tonnes of steel – something that took Britain about a century.

The European Union has tariffs and anti-dumping rules which are designed to prevent this wave of steel from flooding its markets, but such a massive surge in production has posed a massive challenge for British producers, who struggle to compete on price and quantity.

It is no wonder the steel industry has mainly been kept afloat over the past few years thanks to repeated injections of state aid. 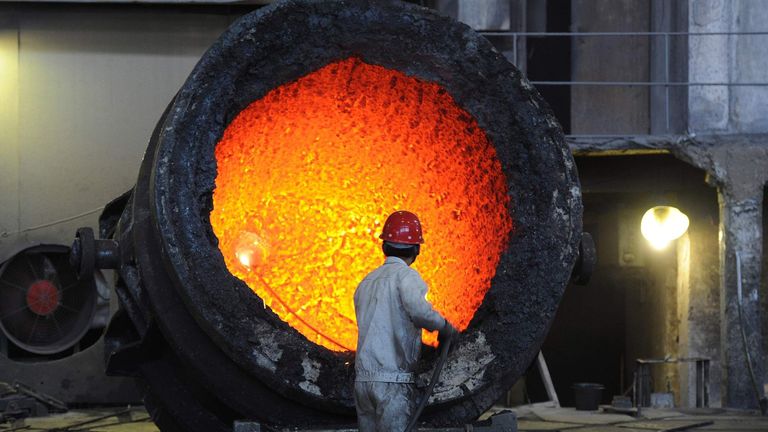 This week is hardly the first time the government has had to consider whether to bail out a key part of the industry.

Now on the basis of all that you might have assumed that the steel industry was one of the poorest performers in the UK economy.

And in one respect you’d be right: today overall UK economic output is around 77% bigger than it was in 1990; the output of the steel industry is around 46% smaller.

However, that brings us to the second intriguing fact about the steel industry, for when you look across the board of all UK sectors, there are few which have increased their productivity as much in the past couple of decades.

For all its image as a failing sector, the steel industry produces more bang-for-buck than most other parts of UK plc.

That is scant consolation for the hundreds of thousands of workers who lost their jobs over that period.

But it is a useful rejoinder.

The steel industry is more lean and advanced than ever before, producing more steel for less effort.

And yet it is still struggling, amid competition from China, environmental costs and the difficulties of competing against foreign counterparts who get constant support from their governments.