WASHINGTON (Reuters) – U.S. President Donald Trump said on Friday that there was a very good chance the United States would strike a deal with China to end their trade war and that he was inclined to extend his March 1 deadline to reach an agreement. 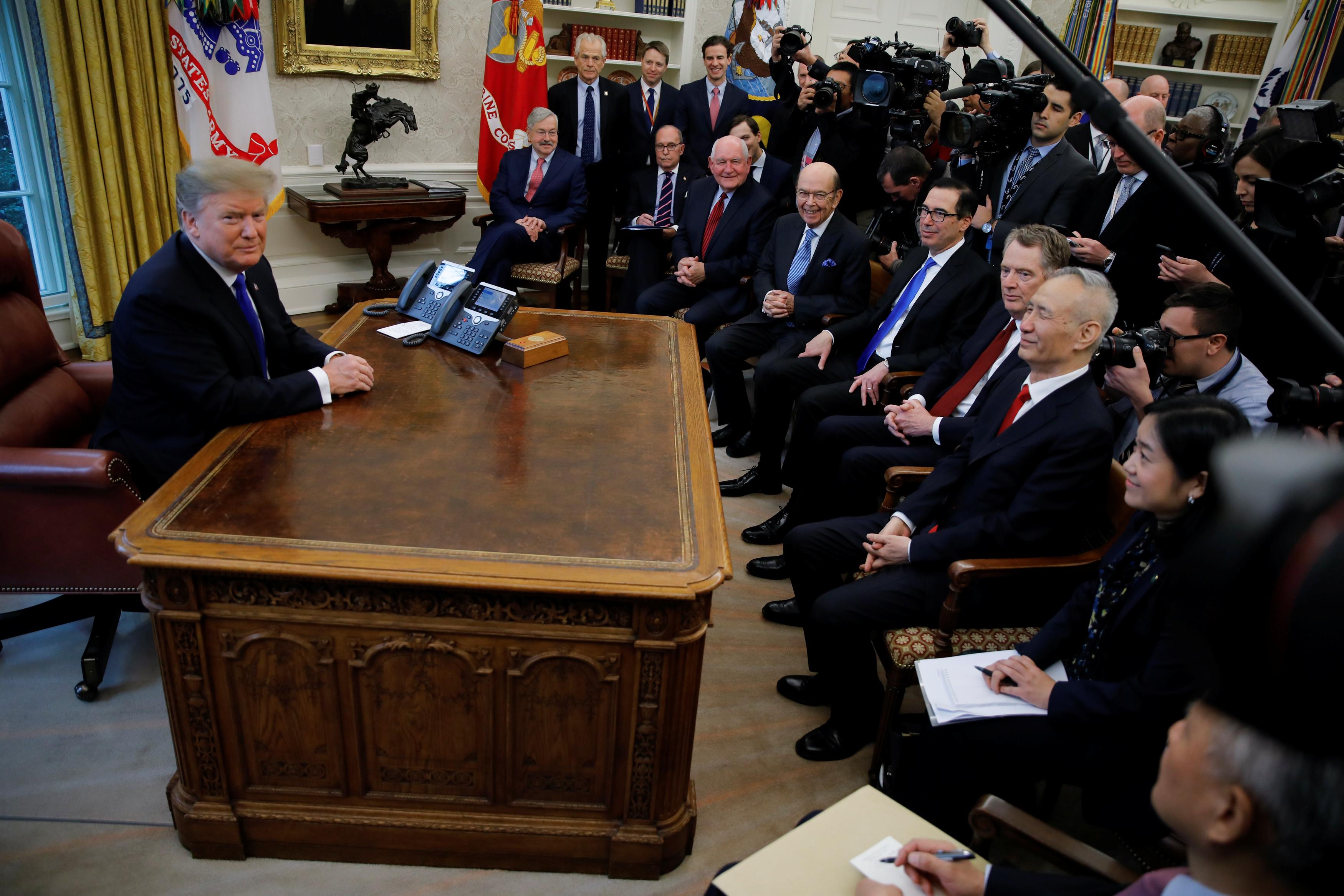 U.S. and Chinese negotiators had made progress and would extend this week’s round of negotiations by two days, Trump told reporters in the White House as he met his top negotiators and their counterpart, Chinese Vice Premier Liu He.

“I think that we both feel there’s a very good chance a deal will happen,” Trump said.

Extending the deadline would mean Trump would put on hold a scheduled increase to 25 percent from 10 percent on $200 billion of Chinese imports into the United States.

That would prevent a further escalation in a trade war that has already disrupted commerce worth hundreds of billions of dollars of goods, slowed global economic growth and roiled markets.

Optimism the two sides would find a way to end the trade war lifted stocks on Friday, especially technology shares, while oil prices rose to their highest since mid-November, with Brent crude reaching a high of $67.73 a barrel. [.N] [O/R]

The president said he expects to meet China’s leader, Xi Jinping, soon, and the biggest trade decisions could come when they meet.

Trump appeared at odds with his top negotiator, United States Trade Representative Robert Lighthizer, on the preliminary terms that his team is outlining in memorandums of understanding for a deal with China.

Trump said he did not like MOUs, because they are short term, and wanted a long-term deal.

“Either you do a deal or you don’t,” Trump said.

Lighthizer responded that MOUs were binding.

Reuters reported exclusively on Wednesday that the two sides were drafting the language for six MOUs covering the most difficult issues in the trade talks that would require structural economic change in China.

The MOUs would provide an outline for a deal, for specific details to be agreed by negotiators later. They are common in trade negotiations.

Lighthizer said that negotiators had made a lot of progress this week on forced technology transfers, one of the more difficult issues. The U.S. alleges foreign firms in China come under pressure to transfer their technology to Chinese firms if they want to operate there. China denies this.

The two sides had struggled this week to agree on the specific language for the MOUs on the toughest issues. Those issues include cyber theft, intellectual property rights, services, agriculture and non-tariff barriers to trade.

Vaccine 'highly protective' against Delta variant says professor When you subscribe we will use the information you provide to send you these newsletters. Sometimes they’ll…

Prince Harry: Charles 'couldn't tell his truth' says Levin When you subscribe we will use the information you provide to send you these newsletters. Sometimes…

BBC Weather: UK warned of 'frost' as temperatures drop When you subscribe we will use the information you provide to send you these newsletters. Sometimes…