Times Square is big, bright and brash. But even by those standards, a new mixed-use renovation project stands out.

The project, TSX Broadway, will pack in a theater, a hotel and a shopping center when it is completed in 2022, plus an outdoor stage that will stick out like a tongue toward people below. A planned LED billboard stretching almost the entire height of the building, or about 550 feet from the base to the roof, will try to outshine the bright lights of Times Square.

But what may be the most daring aspect of the $2.5 billion project, which kicked off this winter at 1568 Broadway, is the expectation that it can fill nine levels of retail space with a single tenant.

TSX is trying to sign a lease in a punishing climate for brick-and-mortar stores that has led to vacancies across New York, even in busy Times Square. But the development team behind the project, led by the real estate developer L&L Holding, is betting that if a store offers enough fun and games, it can beat back the encroachment of online retailers.

“You have to do something that is memorable,” said Andrew Essex, a longtime advertising executive and a consultant on the project. “And that’s where things get exciting.”

The project is part of a trend of offering experiences, like meditation sessions and salt rooms, to lure shoppers to stores. Apple and Ikea are known for creating an experience in their stores, and traditional retailers like Macy’s and Saks Fifth Avenue have overhauled some stores to add Instagram-worthy displays.

The strategy works, analysts say, because online retail can’t duplicate it. But the approach is not foolproof. The N.F.L. Experience Times Square, a 40,000-square-foot interactive attraction created in a partnership between the league and Cirque du Soleil, closed in September after less than a year.

Experiential retail can have hefty upfront costs, making it a risky endeavor. To be successful, projects can’t go overboard with theatrics, analysts say.

“You’ve still got to have a product to sell,” said Marshal Cohen, the chief retail analyst for the NPD Group, a market researcher.

If a store fizzles, landlords are often stuck with a one-of-a-kind location. “They are the ones taking on the risk,” Mr. Cohen said.

L&L is taking a gamble on TSX Broadway. Visitors to Times Square are already confronted by a jumble of stores, like Levi Strauss, MAC Cosmetics and Disney, and a blizzard of screens for brands like M&M’s, Christian Dior and T-Mobile. But the extra oomph that TSX will deliver will be irresistible to passers-by, L&L executives say.

The developer would not disclose the rent for the retail space, but it is expected to be much higher than average because of the opportunity to brand an entire building with the latest bells and whistles. Rents for Times Square stores average $2,000 per square foot, brokers say, down from a peak of $2,300 in 2015. 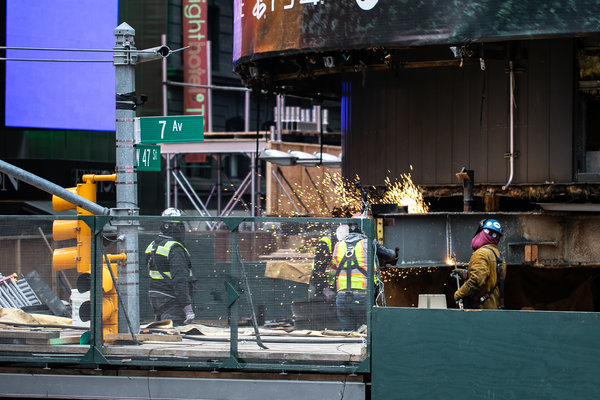 To help with financing, TSX has lined up major backers, including UBS, which led a $780 million round of fund-raising, and Goldman Sachs, which provided a construction loan of more than $1 billion. The project also raised $494 million from investors through the EB-5 program, which awards visas to foreigners, usually from Asia, who invest in job-creating projects.

Construction posed its own challenges. To maximize the street-level retail space, L&L had to find a new home for the Palace Theater, a 1,700-seat hall that dates to the early 1900s and whose filigreed interior is protected by the city’s Landmarks Preservation Commission.

Relocating the theater’s entrance from Seventh Avenue to East 47th Street freed up some space. More substantially, L&L will jack up the theater by three stories — just a few inches a day, starting in 2021, until it reaches its new level a few months later.

The hotel will occupy most of tower. For decades, the site was home to a 486-room DoubleTree Suites, which closed in February. Piles of ripped-out carpets filled its former lobby on a recent afternoon. The new hotel, whose operator has not been selected, will have 669 rooms, which will feature taller windows and higher ceilings than the previous lodging.

On New Year’s Eve, when revelers gather in Times Square, the hotel is expected to charge up to $15,000 for suites with ball-drop views, according to L&L.

“This is the most valuable corner in North America” said David Levinson, the chairman of L&L, which has formed a partnership with Maefield Development, a builder of shopping malls, and Fortress Investment Group, on TSX. “We feel very confident that it will be enormously successful.”

Hedging his bets, though, Mr. Levinson did say the retail space could wind up with multiple tenants.

That strategy has served other large spaces in Times Square, like 1530 Broadway, where Toys “R” Us was once the only tenant. The retailer occupied 110,000 square feet, room for its indoor Ferris wheel, before it closed the store in 2015. Since then, brokers have installed a Gap, an Old Navy and a McDonald’s, which offer a fairly straightforward customer experience.

Carving the space into multiple berths was self-protective, said David A. Green, an associate broker with the firm Colliers International.

“It’s strategic to not have your eggs in one basket,” he said. “That’s why it got chopped up.” But then again, he added, if one deep-pocketed retailer had offered to snap up the entire building, the landlord probably would have acquiesced.

Despite the loss of Toys “R” Us, experiential retail is returning to other areas of Times Square. For instance, at the Levi’s store, a 17,000-square-foot berth at 1535 Broadway, shoppers can get their new pants hemmed on the spot, courtesy of in-house tailors, and design their own T-shirts.

Stillman Development International is also looking for a single tenant to fill its megastore, a seven-level aerie on West 42nd Street inside the former Times Square Theater.

As part of a $150 million redevelopment, Stillman is adding glassy additions to the roof and plans to move opera boxes and the proscenium arch from the theater, which was vacant for years, to shopping areas.

Three new LED screens can handle 3,700 square feet of ads, said Roy Stillman, the firm’s president, who added that the cost for an exclusive lease for the property, which will open in 2021, is $20 million a year.

“When you look around Manhattan, you have a retail apocalypse on your hands,” said Mr. Stillman, who added that even if online sales constituted just 15 percent of retail activity, “it’s not going to abate.” Experiential retail, he added, can keep physical stores competitive.

That approach is also being used at One Times Square, where that New Year’s ball drops.

Since 2008, the pharmacy chain Walgreens has controlled nearly all of the 25-story building, which opened in 1904 and used to be the home of The New York Times.

In the meantime, it’s also going high tech on the prow of the building, at 1475 Broadway. The facade, which for two decades displayed a giant steam-emitting likeness of a Cup Noodles container, went digital years ago. But as part of a $12 million upgrade this spring, it offers more LED coverage, including a new 200-foot-tall, 7,200-square-foot screen.

“Times Square has gone through a few revitalizations,” from seedy hub to office zone and family destination, Mr. Phillips said. With the attention to interactivity, “it’s now on Version 3.0.”

In a sense, New York has had buildings that were used as billboards for brands before. The Chrysler Building, for instance, developed by the eponymous car company, splashed its presence across the skyline while offering auto showrooms inside.

“But those buildings didn’t show off their brand ostentatiously,” said Bernd H. Schmitt, who teaches marketing classes at Columbia’s business school. Still, if there’s any place for over-the-top sales pitches, it’s probably Times Square, which draws 138 million pedestrians each year, according to 2018 figures from the Times Square Alliance.

“Once you start seeing LEDs in suburban New Jersey, then you will have a problem,” Professor Schmitt said.