Volkswagen is going all in on electric cars, with plans to build battery factories in Europe, install a network of charging stations and slash the cost of emission-free travel.

That was the message Monday as the German carmaker staged a so-called Power Day to showcase its latest electric car technology. The event was Volkswagen’s answer to Tesla’s Battery Day presentations, which draw intense attention from investors and electric car buffs.

The session included a number of attention-getting announcements, including a promise that Volkswagen would cut the cost of batteries by up to 50 percent by the end of the decade, while slashing charging time to 12 minutes. That would make electric cars cheaper than gasoline vehicles and just as convenient.

Volkswagen also unveiled plans to build six battery factories in Europe in joint ventures with suppliers. And by 2025, the company said, it would have 18,000 charging stations on the continent operating in conjunction with energy companies including BP. The British oil producer said it would offer charging at its filling stations.

The online event Monday was part of Volkswagen’s effort to position itself as the traditional carmaker making the biggest commitment to emission-free driving — even though it has not yet followed General Motors or Volvo Cars in setting a precise expiration date for internal combustion engines.

Volkswagen is the biggest carmaker in Europe and second-biggest in the world after Toyota. The subtext of Monday’s presentations by a parade of Volkswagen executives was that the company is deploying its industry and government connections, its financial resources, and its eight decades of manufacturing expertise to keep Tesla from eating its lunch.

“Our transformation will be bigger than anything the industry has seen in the past century,” Herbert Diess, the chief executive of Volkswagen, said during the two-hour presentation.

The event coincided with the rollout in the United States of the ID.4, an electric S.U.V. that is part of the first generation of Volkswagens designed from the ground up to run on batteries and seen as serious challengers to Tesla’s dominance in electric cars. The first ID.4s, with a starting price of $40,000 before government rebates, began arriving at American dealers this week.

At least some analysts are starting to believe Volkswagen’s hype. The Swiss bank UBS issued a report this month that ranked Volkswagen just behind Tesla in electric vehicle technology.

Tesla leads in battery technology and software, the UBS report said, but the bank’s analysts gave Volkswagen high marks for its electric car platform — the chassis, motor and other components that drive the vehicle forward and carry the car body. The Volkswagen platform can be produced very efficiently and is flexible enough to accommodate a range of body types like S.U.V.s, hatchbacks or crossover sedans, UBS said. Ford plans to use the platform for some of its electric vehicles.

Volkswagen is “a blueprint for what legacy carmakers need to achieve in the years to come,” Patrick Hummel, a UBS analyst, said during a conference call with journalists last week.

Tesla shares have plunged in recent weeks as it dawns on some investors that the California company may not have a monopoly on electric cars. Volkswagen shares have recovered their prepandemic value and then some. But investors still value Tesla at six times as much as Volkswagen, and the German company faces enormous challenges. 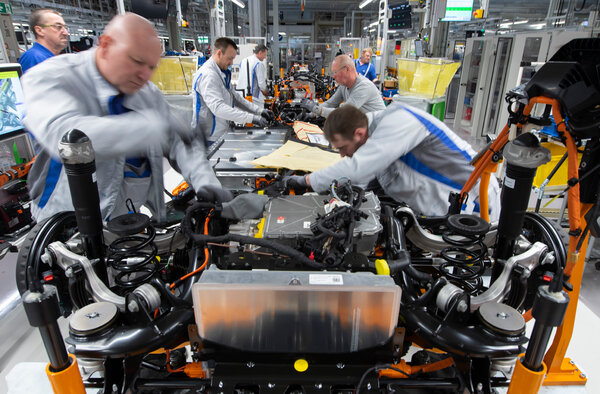 Volkswagen continues to generate most of its revenue from cars that run on gasoline or diesel. Winding down the old technologies while ramping up the new ones will be tricky and painful. Volkswagen said Sunday that it would impose a hiring freeze and offer early retirement to employees as young as 56 to free up money for new technologies. The company said it would continue to hire people with expertise in batteries, electricity and software.

Volkswagen’s new electric models, while promising, have yet to prove themselves in the market. They were initially plagued by software problems, although the company says those have been solved. After a delayed launch, Volkswagen sold 56,000 of its ID.3 model, an electric hatchback not offered in the United States, in the last few months of 2020.

Volkswagen is coping with the devastating effect that the pandemic had on sales. Deliveries to customers fell 15 percent in 2020, to 9.3 million vehicles.

A diesel emissions scandal continues to keep hundreds of lawyers busy and gnaw at Volkswagen’s reputation. Martin Winterkorn, who was chief executive during the years that Volkswagen rigged diesel vehicles to cheat emissions limits, is scheduled to go on trial next month on charges related to the scandal. The trial is certain to generate heavy media coverage and remind the public of Volkswagen’s misdeeds, which came to light in 2015. Mr. Winterkorn denies wrongdoing.

As costly as it has been, the scandal had one benefit for Volkswagen. It forced the company’s managers to think hard about how to restore the company’s good name. They resolved to focus on electric cars. That may put Volkswagen in a better position today than other big rivals who hesitated.

UBS analysts pointed out that Volkswagen is one of the few big carmakers to have developed a platform specifically for electric vehicles, and to retool entire factories to build electric cars. Volkswagen’s size — it sold 18 times as many cars as Tesla last year — will allow it to push down manufacturing costs in a way that smaller carmakers cannot.

Like Tesla, Volkswagen has recognized that people won’t buy electric cars unless there is someplace to charge them. In addition to underwriting a charging network in Europe, Volkswagen will also install 3,500 fast-charging points in the United States and 17,000 in China.

Many other traditional carmakers approached the electrification of cars as something they were forced to do to meet emissions requirements, Mr. Hummel of UBS said.

“They spent too much time looking at electric vehicles from the perspective of compliance,” he said. “Now they are catching up but they are late.”