NEW YORK (Reuters) – U.S. stocks fell more than 1% on Monday as investors worried about the economic impact of a virus outbreak in China as containment efforts including travel bans have been put in place in the world’s second largest economy after the country extended the Lunar New Year holiday.

The benchmark S&P 500 suffered its worst weekly performance since September last week as China locked down several cities and curbed travel, reminding investors of the deadly SARS virus that killed nearly 800 people in 2002-03 and cost the global economy billions.

With cases being linked in as many as a dozen other countries, U.S. President Donald Trump offered China whatever help it needed to contain the virus.

Travel-related stocks, including airlines, casinos and hotels, were among the hardest hit on Wall Street, while shares of sectors exposed to China’s growth, including technology .SPLRCT, materials .SPLRCM and energy .SPNY, pressured the markets.

“Obviously there has to be some concern about its impact on global GDP growth otherwise the market wouldn’t be down,” said Sam Stovall, chief investment strategist at CFRA Research in New York.

Adding to downside pressure was the sluggish start to corporate earnings season with indexes near record levels.

“Most people were buying into the market in anticipation of improving economic and earnings expectations, which just didn’t materialize,” Stovall said.

Earnings are now expected to show a decline of 0.5% for the fourth quarter, according to Refinitiv data. Of the 87 companies that have reported though Monday morning, 67.8 have topped expectations, below the 74% rate from the past four quarters.

All of the three major averages were on track for their biggest one-day percentage declines since early October. Wall Street’s fear gauge, the CBOE Volatility index .VIX, touched a high of 19.02, its highest since Oct. 10.

Technology and internet heavyweights that have powered the recent rally including Apple Inc (AAPL.O), Microsoft Corp (MSFT.O), Alphabet Inc (GOOGL.O) and Amazon.com Inc (AMZN.O), which account for about 15% of the S&P 500 weighting, lost at least 1.3%.

Yum China Holdings Inc (YUMC.N) tumbled 4.95% after the company said it had temporarily closed some of its KFC and Pizza Hut stores in Wuhan, the epicenter of the outbreak.

The rush to safe haven assets sank U.S. Treasury yields, with the benchmark 10-year note US10YT=RR falling as low as 1.603%, its lowest since Oct. 10, and the yield curve between the two-year US2YT=RR and 5-year US5YT=RR inverting for the first time since Dec. 4, putting pressure on lenders. The S&P 500 banks index .SPXBK was down 1.21%.

The S&P energy index .SPNY dropped 1.21% as crude prices fell below $60 per barrel on fears of slowing oil demand following the outbreak. 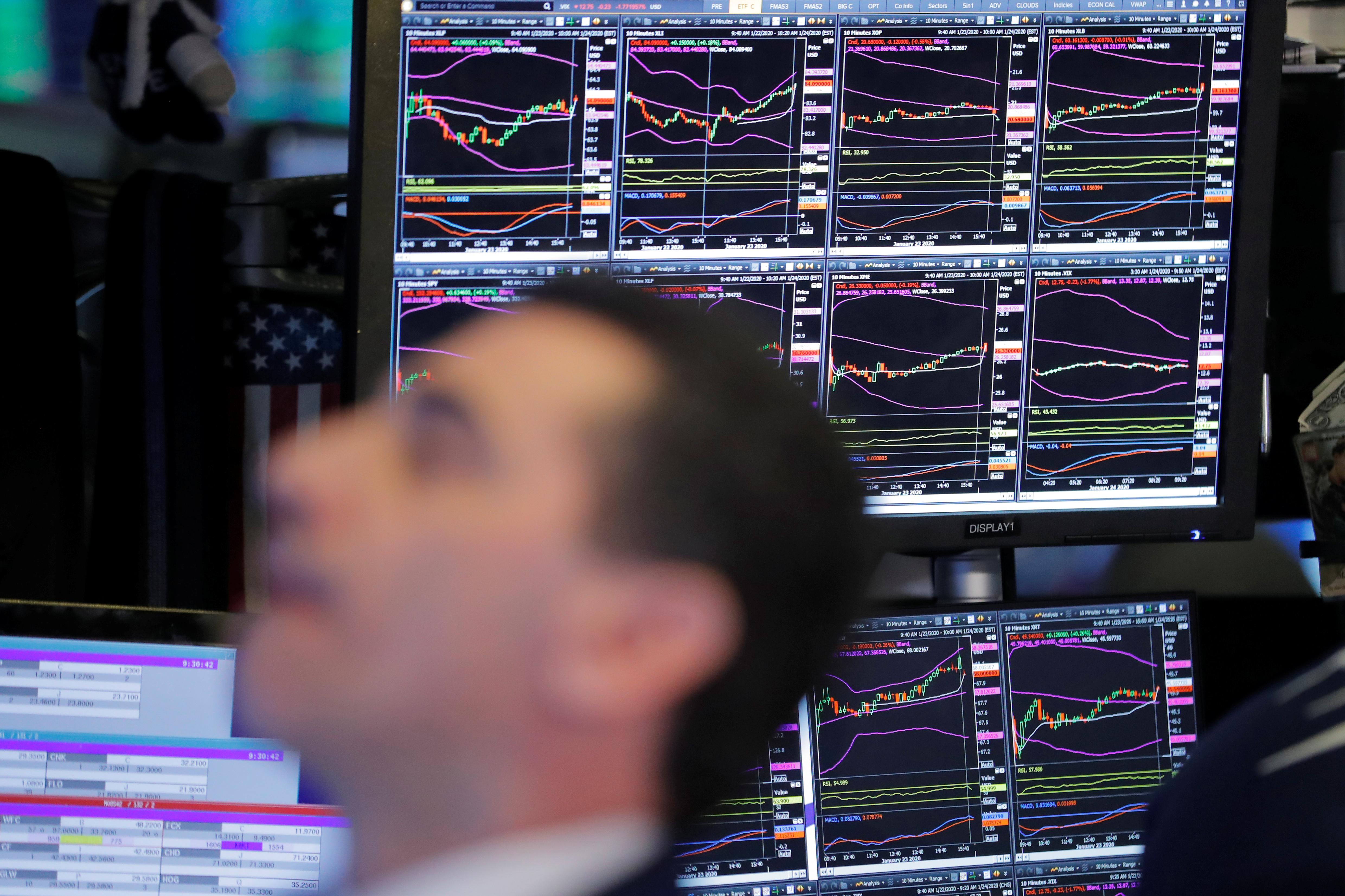 Fourth-quarter earnings will kick into high gear this week with 141 of the S&P 500 companies, including Apple, Microsoft Corp and Boeing Co (BA.N), expected to report.

Declining issues outnumbered advancing ones on the NYSE by a 3.29-to-1 ratio; on Nasdaq, a 2.30-to-1 ratio favored decliners.