After a monthlong delay because of the government shutdown, the Commerce Department will release its preliminary estimate of fourth-quarter economic growth at 8:30 a.m. on Thursday. Here’s what to watch for.

The American economy is slowing. The question now is by how much — and how far that slowdown will go.

Forecasters surveyed by Bloomberg estimate that gross domestic product — the broadest measure of goods and services produced in the United States — grew at a 2.2 percent annual rate in the final three months of last year. That would mark a significant slowdown from the middle of the year, when a sugar high fueled by tax cuts briefly pushed growth above 4 percent.

This year looks to be off to an even worse start. Many economists expect growth to drop below 2 percent in the first quarter, in part because of the partial government shutdown, which began in December and extended through most of January.

It’s important to keep the cooling economy in perspective. Barring a surprise on Thursday, 2018 will probably end up being among the best years of the decade-long recovery from the Great Recession. And most economists do not expect a recession this year, putting current expansion on track to become the longest on record.

“I think this is a slowing,” said Lewis Alexander, chief United States economist for Nomura. “I don’t think this is ‘we’re falling into an abyss.’”

A good year — but how good?

One thing on the line in Thursday’s report: bragging rights.

President Trump and his advisers have repeatedly promised that the growth figure for last year will hit 3 percent and stay at that level for years into the future. The United States hasn’t experienced a full year of growth above 3 percent since 2005, when George W. Bush was president.

So did Mr. Trump hit his target in 2018? It will be close. The answer could come down to an obscure methodological distinction.

Economists calculate annual G.D.P. growth in two slightly different ways. One method, used by the Congressional Budget Office and commonly cited in the media, is based on the average size of the economy over a full year. The other approach, preferred by the Federal Reserve and most Wall Street forecasters, focuses on just the fourth quarter compared with the same period a year earlier. (The Commerce Department reports both figures.) 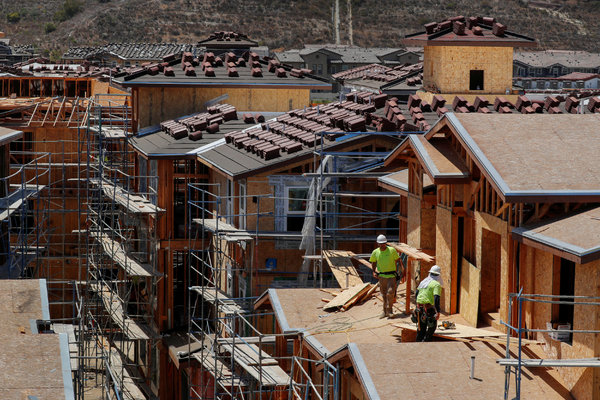 Under the first method, Mr. Trump almost certainly fell slightly short of his 3 percent goal. But under the second method, the economy will hit that target as long as Thursday’s report meets economists’ expectations. Don’t be surprised if Democrats and Republicans issue dueling news releases, each highlighting the figure that serves them best.

Whether growth hits 3 percent might matter politically, but it makes little difference economically. The difference between 2.9 percent and 3 percent growth is negligible in any one year, and, in any case, the Commerce Department will revise its fourth-quarter estimate in March.

And even if the economy hit Mr. Trump’s target in 2018, it is unlikely to repeat the feat this year. The Fed expects growth to slow to 2.3 percent in 2019, and many economists are even more pessimistic.

Signs of trouble are growing

Clouds have been gathering over the economy for a while. The housing market slowed sharply in 2018, as higher interest rates and declining affordability weighed on construction and sales. Business investment weakened as the year progressed. And retail sales dropped unexpectedly in December, a sign that consumers — long the bedrock of the recovery — are starting to pull back.

Economists point to several factors to explain the slowdown. Rising interest rates made it more expensive to buy homes, cars and other big-ticket items. The tax cuts that Mr. Trump signed in late 2017 helped pump up spending in early 2018, but those effects have begun to fade. Trade disputes resulted in higher costs and greater uncertainty for many manufacturers, making them reluctant to invest.

“A big factor was the uncertainty around trade,” said Joseph Song, an economist at Bank of America Merrill Lynch. “That took a lot of steam out of the optimism around tax cuts.”

The shutdown probably came too late to make much difference to the fourth quarter, but it could be a significant drag on growth early in the year. Macroeconomic Advisers, a forecasting firm, estimates that growth has slowed to a 1.2 percent annual rate in the current quarter.

Growth that weak would leave the United States with little buffer against an unexpected round of bad news — an escalation in the trade war with China, for example, or another round of fiscal gamesmanship around the debt ceiling. A rising share of economists expect a recession in 2020 if not sooner.

“The economy’s already slowing and there are a bunch of reasons why it could slow down even more, and that just makes you vulnerable,” said Mr. Alexander of Nomura. “It would take less of a shock to push you over the edge” into a recession.

It might not even take a shock at all. If businesses and consumers get nervous about the economy, that could set in motion a vicious cycle of reduced spending and job cuts, said Lindsey Piegza, chief economist for Stifel Fixed Income.

“The recession is almost going to sneak up on us,” she said. “This time around, it’s not a bubble bursting. It’s the air slowly being let out of the balloon.”

Is there reason for optimism?

Not everyone is so pessimistic. Most economists believe the shutdown did little long-term damage to the economy. Consumer confidence rebounded in February as federal workers returned to work and the stock market bounced back from its December slump. Job growth never suffered.

There are other reasons to think the economy could prove resilient. Trade tensions with China seem to have eased somewhat in recent weeks. The Federal Reserve has backed off plans to raise interest rates. And the combination of low unemployment, rising wages and low oil prices should help drive consumer spending.

“All the fundamentals are there for a solid consumer recovery,” said Michael Pearce of Capital Economics.

Ben Casselman writes about economics, with a particular focus on stories involving data. He previously reported for FiveThirtyEight and The Wall Street Journal. @bencasselman • Facebook

We will use your email address only for sending you newsletters. Please see our Privacy Notice for details of your data protection rights. The move…