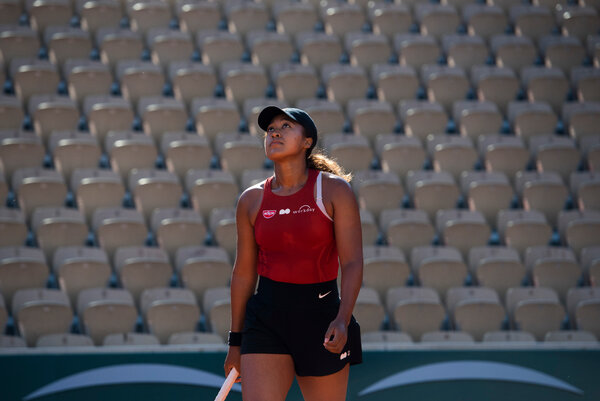 Mental health at the workplace (or tennis court)

The tennis star Naomi Osaka withdrew from the French Open yesterday, citing concern for her well-being, one day after officials threatened to expel her for not wanting to participate in news conferences. To us, this raises a number of questions, including: What’s to be done when one’s job includes tasks that pose risks to mental health?

Mental health is increasingly seen as a workplace issue. Employers have been paying more attention to their workers’ well-being. And athletes are speaking out more frequently about their own mental health. Osaka has said that she had suffered from depression since 2018, which she said were exacerbated by the pressure of engaging with the media.

The challenge is when that’s part of the job. Tournament organizers fined Osaka $15,000 after she skipped her first post-match news conference, and insisted she fulfill her media obligations. (She said she was willing to accept those fines.) That raises similar questions as other instances in which employers and workers disagree over matters tied to mental health, whether that be returns to the office or long working hours. Are there things companies can — or should — offer employees to help them cope?

Osaka’s move drew support, including from fellow athletes — “You shouldn’t ever have to make a decision like this — but so damn impressive taking the high road when the powers that be don’t protect their own,” tweeted Steph Curry — and from Nike, one of her sponsors, who told DealBook in a statement, “We support her and recognize her courage in sharing her own mental health experience.”

Giles Moretton, the president of the French Federation of Tennis, called Osaka’s withdrawal “unfortunate” and wished her a quick recovery. He added, “We remain very committed to all athletes’ well-being and to continually improving every aspect of players’ experience in our tournament, including with the media.”

Others noted that athletes also benefit from media exposure. Before Osaka withdrew, Rafael Nadal said that without the media, “probably we will not be the athletes that we are today.”

What do you think of Osaka’s decision? Email us at [email protected].

The O.E.C.D raises its economic forecast, citing vaccinations and stimulus. The organization now predicts the global economy will grow 5.8 percent in 2021, up from the 4.2 percent it projected in December, amid inoculations in advanced economies and U.S. stimulus spending. (Even India is showing signs of economic recovery.) But it expects that rate to slow next year after governments wind down their aid programs.

Air traffic hits a pandemic peak. Nearly two million passengers passed through security checkpoints in U.S. airports on Friday, a level last hit in March 2020. But that has also meant a sharp rise in the number of unruly passengers, particularly those unwilling to comply with face mask mandates.

Global finance ministers are set to back a U.S. call for a global minimum corporate tax. Support from 7 nations for the plan is a crucial early win for President Biden, as he pushes for a worldwide floor on taxes on business profits as part of his effort to raise corporate taxes in the U.S.

Biden plans to overhaul U.S. immigration policies. A planning document seen by The Times shows that the White House is working on ways to simplify the immigration process and increase quotas, including for work visas. If it succeeds, it would go beyond reversing Donald Trump’s policies and bring sweeping change to immigration rules — much of which could be accomplished through executive action.

Businesses stay quiet on a failed Texas effort to restrict voting access. An effort by Republican lawmakers to enact some of the strictest voting laws in the nation failed on Sunday, after Democrats walked out of the state capitol. But companies that had openly opposed those efforts have said little — including American Airlines, based in Fort Worth, and Dell, headquartered in Round Rock, both of which declined to comment beyond previous statements — even as Republicans plan to reintroduce the bill at a special session.

The benefits and perils of hype

In a lengthy profile that we devoured over the weekend, The New Yorker traces the arc of Chamath Palihapitiya, the Facebook executive turned investor who has become one of the biggest moguls in the world of SPACs. The article — and a separate Twitter thread needling Palihapitiya — show how an outspoken presence can generate a fortune, but also make someone a huge target for critics.

Palihapitiya’s bravado helped launch the SPAC boom, The New Yorker argues, as he applied his innate showmanship to the necessary process of selling blank-check funds to Wall Street and mainstream investors alike.

It helped him win over converts, according to the article: In a meeting to pitch his first SPAC’s plan to merge with Virgin Galactic, one listener rattled off a list of criticisms. Palihapitiya responded by calling the man an “idiot” (augmented by a few expletives) and asked, “Have you even looked at the prospectus?” An audience member later called the outburst “brilliant.”

That braggadocio and careful stoking of his celebrity allowed him to raise billions for venture capital funds — and then pivot to SPACs when he needed a change in strategy (and image). “The returns that we’ve generated — you can’t B.S. those,” he told The New Yorker.

Still, Palihapitiya isn’t lacking for critics, including those who say his claims about SPACs are inflated. The latest emerged over the weekend, when Christopher Bloomstran, the investment chief of Semper Augustus Investments Group, took to Twitter to poke holes in Palihapitiya’s latest letter to investors.

Bloomstran noted errors in counting years in a time period and in quantifying the S&P 500’s return for last year, and raised questions about Palihapitiya’s comparisons of his own firm’s returns to those of Berkshire Hathaway. “Perhaps there’s room at your shop for a fact checker?” Bloomstran concluded. (So far, Palihapitiya has answered two of those criticisms.)

At the urging of business groups, the Equal Employment Opportunity Commission on Friday made clear how companies can issue vaccine mandates to workers coming back to the office, and what incentives those employers can offer to promote inoculation.

Companies can require vaccines only of employees returning to the workplace, the E.E.O.C.’s note on Friday said. But doing so still counts as a mandate, so companies must make the same considerations that companywide vaccine requirements would entail, like accommodations for employees who can’t receive the vaccine.

“I do think it’s important that the E.E.O.C. addressed this because I worry that some employers were sort of going down the wrong path, and thinking that it wasn’t that big of a deal to have a vaccination requirement,” Jessica Kuester, an employment benefits lawyer at the law firm Ogletree Deakins, told DealBook.

Employers can also offer vaccine incentives, the E.E.O.C. clarified. That includes enticements like giving workers paid time off to get vaccinated, as well as rewards for employees who show proof of inoculation, like the $75 bonus that Walmart is offering. Companies have also been offering the opportunity to go mask-free at the office as a type of inducement, though several aren’t asking for proof of vaccination, perhaps as a concession to practicality. (“Are you really going to go around and, when you see an employee without a mask, are you going to run back to H.R. and verify that that person really was fully vaccinated?” Kuester said.)

Strong support at Amazon for a racial equity audit

Amazon shareholders rejected a demand at the e-commerce giant’s annual meeting last week that the company conduct a comprehensive review of how its practices are affecting ethnic minorities. But they did so by the slimmest of margins — and progressive investors are claiming some measure of victory.

About 44 percent of votes cast supported the so-called racial equity audit, according to Amazon’s tally of the results. That’s among the strongest showings for such a measure this year; a similar proposal at JPMorgan Chase, for instance, garnered 39 percent support.

Proponents of racial equity audits said it was a sign of progress. The New York State comptroller, Thomas DiNapoli, who was behind the Amazon proposal, noted that if Jeff Bezos’s 14 percent stake had been excluded from voting, the measure would have won majority support. “Shareholders sent a loud message to Amazon that they want the company to do more to address racial diversity, equity and inclusion,” DiNapoli said in a statement.

Dieter Waizenegger, the executive director of CtW Investment Group, which put up similar proposals at several big banks, told DealBook that the vote “is an apt culmination of calls for independent reassurances that companies actually follow up on their pledges to became more racially equitable.”

Corporate chiefs are paying attention. JPMorgan’s Jamie Dimon criticized such audits at a House hearing last week as cumbersome and expensive. But Citigroup’s Jane Fraser said that such an exam is “something that we’re looking at again, given it was brought up by our shareholders.”

AMC raised $230 million by selling shares to Mudrick Capital, taking advantage of its surge in popularity among meme-stock investors. (MarketWatch)

The two families who control Volkswagen’s largest shareholder are said to be considering taking a stake in Porsche if it were to be spun out of the company. (Reuters)

Why Covid-era rules on cannabis and telemedicine might outlast the pandemic. (Politico)

China will now allow couples to have three children, up from two. (NYT)

Current and former Oracle employees have reportedly complained about a “culture of fear” inside the tech giant’s fast-growing cloud services division. (Insider)

Best of the rest

“How the World Ran Out of Everything” (NYT)

Does the controversy-plagued AstraZeneca vaccine have a future? (FT)

Food companies like Ben & Jerry’s are still waiting to roll out new products featuring C.B.D. — as soon as it’s legal to do so. (Bloomberg)

We’d like your feedback! Please email thoughts and suggestions to [email protected]