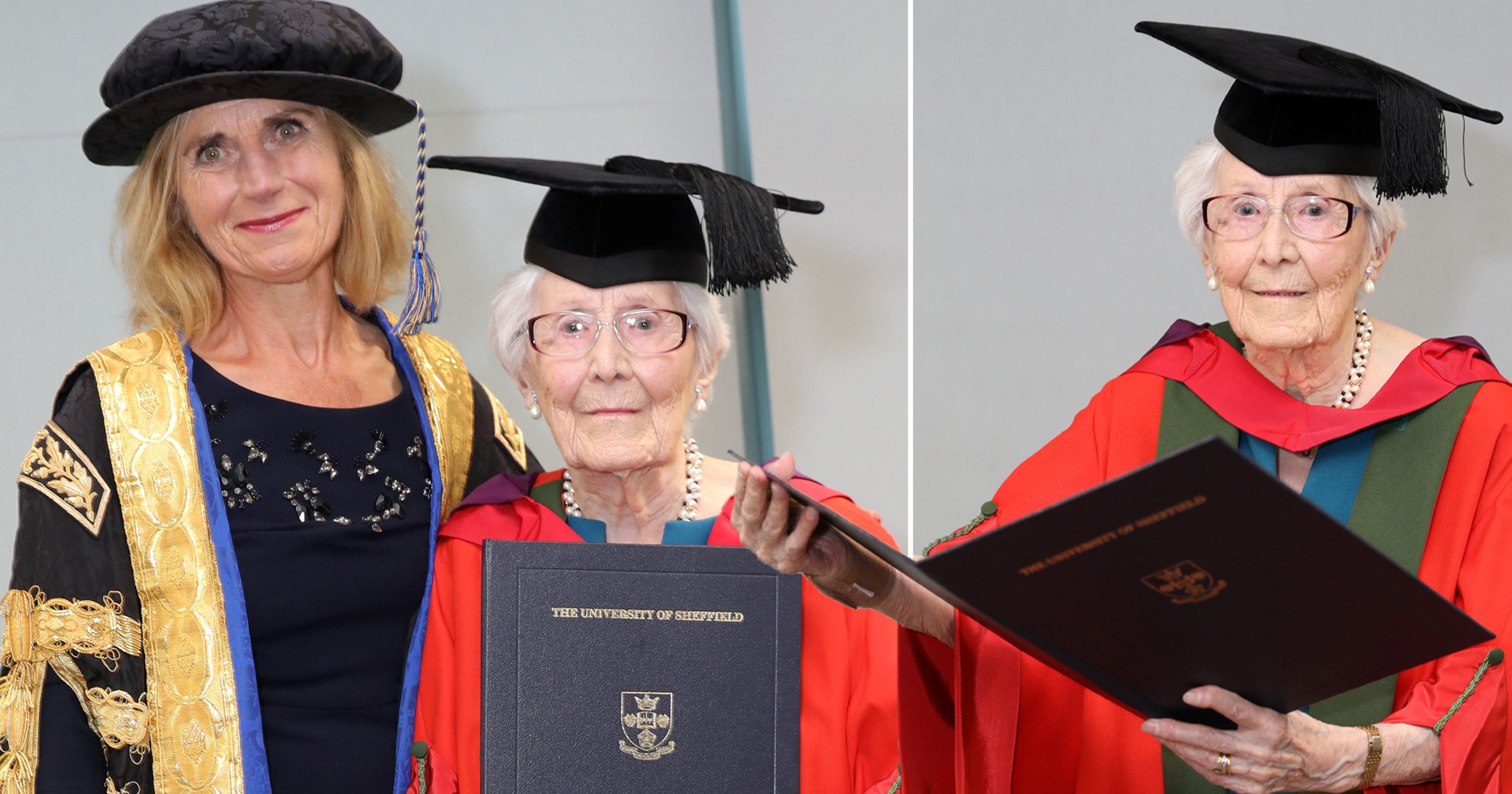 A 100-year-old woman who ‘risked life and limb’ during the Second World War has become one of only two centenarians to be given an honorary degree.

Kathleen Roberts is the only surviving member of the ‘Women of Steel’.

The group kept Sheffield’s steel industry from collapse with months of gruelling work after the outbreak of war.

Kathleen was just a teenager when she was sent down the city’s mines.

She and the other women enlisted worked gruelling 72 hour weeks while being paid less than men doing the same job.

Thousands of Sheffield women, from all types of backgrounds, worked in the mines as everything from heavy machine operators to crane drivers.

The conditions were poor and their dirty air raid shelters filled of rats. If the air raid siren did go off, the women would simply instead don tin helmets and continue their work.

But despite the setbacks, the Women of Steel still successfully kept Sheffield’s steelworks industry running.

But they were later told they were ‘surplus to requirements’ and dismissed without thanks. The group was even encouraged not to speak about what they had been through.

But Kathleen eventually did raise her voice, and helped launched a seven-year campaign to preserve the legacy of the Women of Steel.

The 100-year-old has now been made an Honorary Doctor of Engineering at Sheffield University – recognising her efforts both as a female steelworker and campaigner.

‘You can’t learn everything in a book’, was her key advice following the award.

She said: ‘It was such a surprise when I first heard I was to be given an Honorary Degree in Engineering, but I feel so honored and privileged to accept it on behalf of all those Women of Steel who contributed to the war effort.

‘My advice to students would be to get as much hands-on experience as you can. You can’t learn everything in a book.

‘But most of all, embrace every opportunity that enables you to follow your dreams.’

Kathleen now has a statue to commemorate her and her fellow female steelworkers – and a book has even been written about their work.

She said: ‘This is a very fitting accolade to a woman, who has not only risked life and limb in the Sheffield steel works during World War Two, but also spearheaded the campaign to ensure the remarkable generation who worked alongside her, received the recognition they truly deserved.

‘Kathleen was adamant she was accepting her honorary degree on behalf of every woman who sacrificed so much to help the Allied troops.

‘What a remarkable way to mark her centenary year.’

Kathleen follows in the footsteps of fellow centenarian Hilda Moore.

The 100-year-old played hockey for England in 1947 and last week received an honary doctorate from Bedfordshire University. It marked her contribution to Physical Education, sport and life-long learning through physical activity.