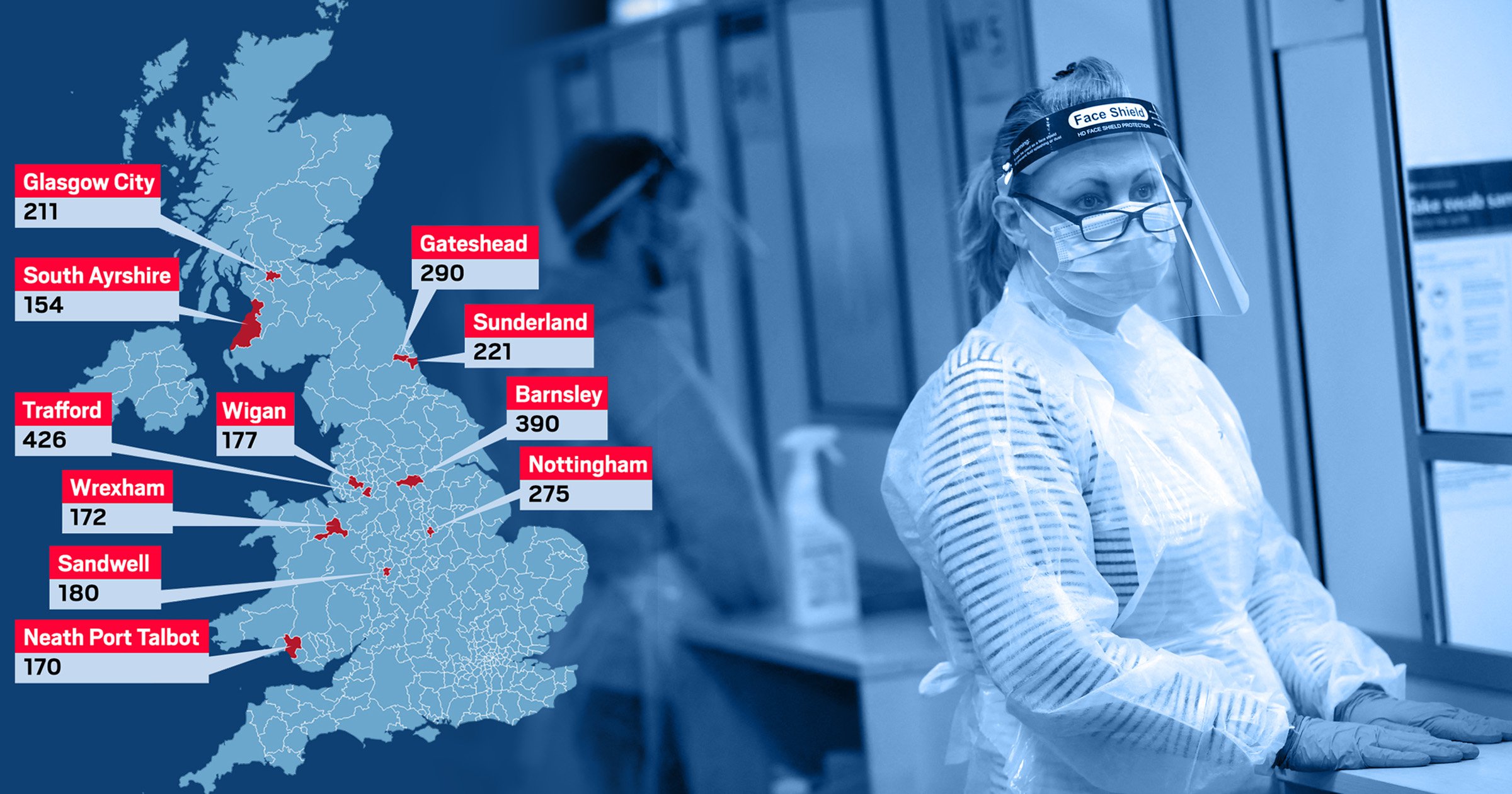 Coronavirus researchers have added 11 hotspots to their UK watchlist amid concern over whether the Government’s June 21 target for lifting the remaining lockdown restrictions can go ahead.

Most of the areas at the top end of the Zoe Covid Symptom Study’s weekly list are located in the North West of England and in Scotland.

It features Tameside, North Lanarkshire, Bury, Leicester and East Dunbartonshire, and has been expanded to include Trafford, Nottingham, Sunderland, Glasgow and Sandwell.

The update comes after cases of the Covid-19 variant that originated in India, also known as the Delta variant, jumped by nearly 80% in the space of a week.

The strain is now believed to be dominant in the UK, with early evidence suggesting it may lead to an increased risk of being admitted to hospital compared with the Kent variant.

Tameside remained at the top of the Zoe Covid Symptom Study’s weekly list with a rate of 908 cases per 100,000 people, an increase of 485 compared to a week ago.

North Lanarkshire had the second highest rate, 669 per 100,000, pushing it up four places, while Bury remained third with a rate of 606.

The list has been expanded to 25 local authorities from 20. Six areas were removed from the latest watchlist, including Aberdeen, Redbridge in east London and Bradford.

It is based on weekly reports from thousands of Zoe Covid Study app users in each area and the proportion of newly symptomatic users who have tested positive.

Tim Spector, a founder of the app and professor of genetic epidemiology at King’s College London, said: ‘The UK picture is changing quickly now. Cases are rising, but not nationwide, it’s very much a regional issue.

‘The North West of England and Scotland are the two regions with the highest prevalence, with rates higher than in some parts of Europe.

‘However, the data highlights that the increase is happening in the younger age groups, suggesting the start of an epidemic in the young.

‘He can’t be too complacent, and we are monitoring things closely.’

Prof Spector added: ‘The ending of lockdown is on everyone’s minds and given the current situation, I believe we should continue to soften restrictions but not lift them all just yet.’

He suggested it would be ‘sensible’ to retain some restrictions, such as working from home, wearing face masks on public transport and indoor capacity limits.

Health Secretary Matt Hancock said on Thursday that it remains ‘too early’ to say whether all coronavirus restrictions can end on June 21.

Professor Neil Ferguson, from Imperial College London, whose modelling was instrumental to the UK locking down in March 2020, said this morning that he thinks the data is ‘pointing this week in a more negative direction than it was last week’.

He told the Today Programme: ‘First of all, it’s not my job to make that decision, thankfully.

‘I think the data is pointing this week in a more negative direction than it was last week, so it points towards the direction of being cautious.

‘I think balancing, clearly, people’s desire – and there clearly is a built-up desire to get back to normal – against the potential risk is a very difficult judgment call.’

Asked what difference delaying the June 21 lifting of restrictions would make in terms of the scientific evidence, Prof Ferguson added: ‘We know at the moment that the Delta variant, the Indian variant, is doubling across the country about every nine days with some variability place to place.

‘But we haven’t fully seen the effect of what happened May 17 step three, the relaxation of restrictions, come through into that data, so we expect that to accelerate even more.’

Prof Ferguson said it is still unclear how increased numbers of cases will translate into hospital admissions.

He said: ‘We’re seeing an uptick in hospitalisations in the North West, in a couple of other areas, but it’s just too early to say, and that’s critical because we do expect vaccines to give a high level of protection still, but exactly how high it’s critical to what size third wave we might see.’

According to Zoe study estimates, there are currently 4,608 new symptomatic cases of Covid-19 in the UK on average, based on swab test data from up to five days ago.

It is an increase of 45% on last week, when there were 2,550 daily cases, and similar to where numbers were two weeks ago.

The R value across the UK is estimated to be 1.1, with regional values of 1.2 in Scotland, 1.1 in England and 0.9 in Wales. No estimate for Northern Ireland was available.