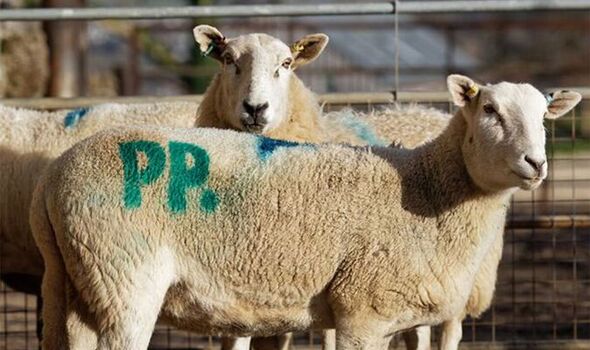 Two surviving members of the 1958 Wales squad have made headlines, along with more than one thousand sheep, after creating an epic good luck message. The stunt was designed to rally Rob Page and his men as they take on England in their first World Cup in 64 years.

According to WalesOnline, the woolly stunt, led by Irish bookie Paddy Power, was carried out on a Gower farm just outside Swansea. In all, 1,000 Welsh sheep and 200 lambs were corralled into pens spelling out “SHEEP>LIONS” at Gower Salt Marsh Farm.

Former internationals Cliff Jones, 87, and Terry Medwin, 90 unveiled the rousing message as the two surviving members of the last Wales team to reach the World Cup. Approximately 160 sheep were used to create each letter.

Such was the scale of the message – which measured 1,248m 2 – it was the equivalent to 56 Gareth Bales wide and seven Aaron Ramseys high. Or perhaps easier to envisage, that’s about the same size as the average World Cup football pitch wide and just shy of three double decker buses high.

The caper wasn’t short of sheep-themed puns as Paddy Power issued a strong message to England: “Wales are coming to get ewe.”

Paddy Power said that employing the services of the tiny nation’s 10 million strong army of sheep (who outnumber the Welsh population 3:1) to quadruple the Welsh fanbase seemed “the only logical course of action”. Paddy Power said: “As an Irish brand, we know all about being underdogs at the World Cup. Unlike us, our Celtic cousins have made it to this tournament, and now, on the other side of the world, they face England.

“This is their cup final. They haven’t waited 64 years and travelled all that way to be troubled by a neighbour from back home. We wanted to send a message of support from sheep pen to Rob Page, and warn Southgate: Wales are coming to get ewe – and they plan on showing what they’re made of: courage, fearlessness…and 76.3% wool.”

Former Wales and Tottenham Hotspur star Cliff Jones said: “There’s no greater feeling for the Welsh than beating the English, no matter what the sport. It’s so ingrained in our culture even the sheep know it.

“This giant message of support from our treasured sheep population will inspire the boys out in Qatar even more.”

The lettering was formed of 700m of fencing and 500 fence posts.