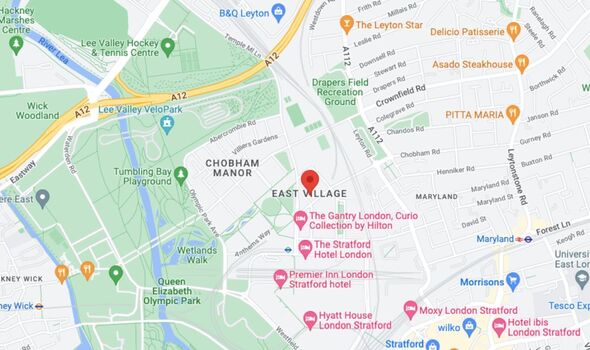 Police have said that the boys, aged 15 and 18, were injured during an attack at Emperor Mansions in East Village. The fight broke out around 7pm which left the boys in non-life-threatening condition and police were called to the area at 7.11pm.

Newham Green Party Councillor Nate Higgins reported that there were “two victims, one with stab wounds”.

The two teenagers were taken to hospital by London Ambulance Service paramedics.

The police confirmed that the 15-year-old boy who was injured has been arrested on suspicion of grievous bodily harm.

He will be taken into custody once discharged from hospital.

A crime scene is still in place in the area, with police securing a cordon around the block of flats.

The housing development was constructed as the Olympic Village for the 2012 Summer Olympics and is now a residential area.

Just a few streets away from the stabbing, a local MP was holding a meeting on tackling crime in East London.

Rob Newman wrote on Twitter: “Thanks to @lynbrownmp and @MPSNewham for public meeting in Stratford tonight on crime in the E20 area.

“More visible policing has been promised for the coming months.

“It’s sorely needed: residents feel much more vulnerable and less secure in their community than a year ago.”

Footage of police erecting a cordon was posted online by a local resident who described the incident as “awful” and “really scary”.

The resident told MyLondon: “This is really awful. We live on Napa Close, literally my boyfriend had come back home 10 minutes before me and nothing had happened then, when I came 10 minutes after there were police and ambulances.

DON’T MISS:
Camilla is more popular in the US than Meghan – poll (POLL)
Strike fatigue fuels Conservative comeback against Labour in poll (REVEAL)
Is it time for teachers to get a fair pay rise? YOUR VERDICT (INSIGHT)

“It is really scary knowing that had either of us walked back home minutes earlier or later we would have also seen it all.”

Those with any information have been asked to call 101 with reference CAD 5954/19Jan.

People with information who wish to remain anonymous can call Crimestoppers on 0800 555 111.