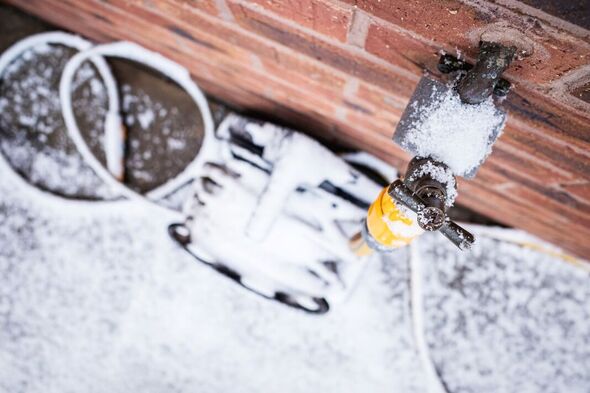 Temperatures in some areas went from sub-zero to 15C, melting ice and snow overnight.

Broken pipes and mains cut off 15,000 homes and businesses across Kent and Sussex yesterday.

Incident director Douglas Whitfield said: “On a normal winter’s day we extract, treat and pump an average of 520 million litres of drinking water a day to customers. During the past 24 hours this has increased to 620million… we are reacting as quickly as possible.”

Scottish Water said it too had seen an extra 100 litres a day through its system – and a 150 percent rise in burst pipes. Welsh Water also faced a large number of leaks due to the rapid thaw – with one pub facing a huge clean-up after pipes burst and water poured in from the ceiling.

The rise in temperatures has been accompanied by widespread downpours, with people being warned to be on flood alert as they start preparing for their Christmas getaway. Yellow alerts for torrential downpours were put in place overnight across southern England and South Wales.

Last night there were 13 flood warnings in place and 64 other alerts.Flooding could cause more disruption on roads – with traffic expected to swell as thousands of rail workers strike from 6pm on Christmas Eve.

The RAC predicts the worst jams between 10am and 7pm on Friday, and noon and 1pm on Saturday.

The Met Office says conditions are likely to be warmer by the end of the week – with wintry showers and a risk of overnight frosts.

But any snow will likely stay on higher levels, meaning there is little chance of a white Christmas.

Next year is forecast to be the 10th consecutive year in which global temperatures will be at least 1C above pre-1850 levels, says the Met Office.