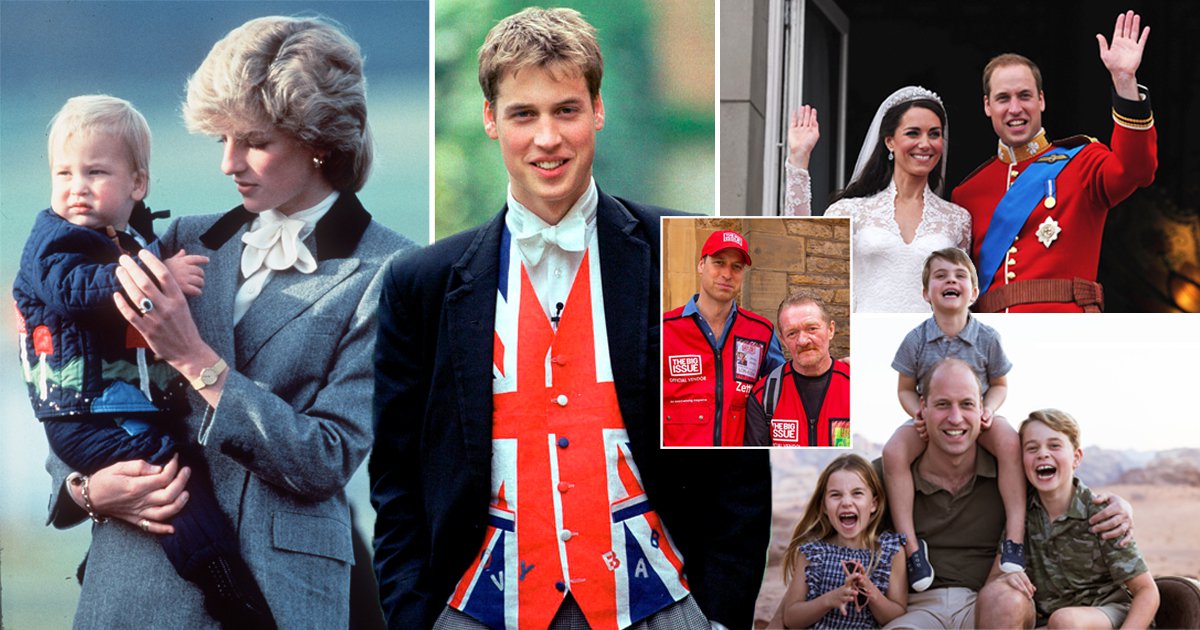 A touching series of photos have been released to celebrate Prince William’s 40th birthday today.

For his big milestone, the Duke of Cambridge is pictured through the years – from a newborn in Princess Diana’s arms to his role as a dad of three, husband and future king.

The images shared by Kensington Palace perhaps give a hint to what his reign would look like and the issues he truly cares about.

Taken shortly after the Queen’s Platinum Jubilee, William is seen selling The Big Issue on the streets of London – a far cry from the traditional royal photoshoot.

He gets busy interacting with the public to raise the issue of homelessness, something his late mum was determined to shine a light on.

Wearing jeans and a shirt, he was accompanied by veteran seller Dave Martin who showed him the ropes.

‘So, for my part, I commit to continue doing what I can to shine a spotlight on this solvable issue not just today, but in the months and years to come,’ the duke wrote in the magazine.

‘And in the years ahead, I hope to bring George, Charlotte and Louis to see the fantastic organisations doing inspiring work to support those most in need – just as my mother did for me.’

As the second in line to the throne, William is always under the spotlight while he awaits his eventual accession.

This is what the 40 archive pictures show – his lifelong preparation for a central role in the Royal Family.

The duke is also shown studying at university, in his military uniform at Sandhurst and as an air ambulance helicopter pilot.

Among the images is also one of him on his first official royal tour when he joined his parents on a six-week trip to Australia and New Zealand when he was just nine months old in 1983.

But there are also some more light-hearted times, showing the future king’s tender side.

William is caught smirking as the Queen makes a remark while inspecting him and his fellow cadets during a passing out parade at Sandhurst in 2006.

The prince can also be seen on holidays with Diana and Charles and playing bicycle polo with his younger brother.

Times of joy show William announcing his engagement to his former university flatmate Kate Middleton, now the Duchess of Cambridge.

He is set to celebrate privately with his family, according to Kensington Palace.

The celebration comes just days after a very special picture of the duke and his children Prince George, Princess Charlotte and Prince Louis was released to mark Father’s Day.

Get in touch with our news team by emailing us at [email protected]o.co.uk.