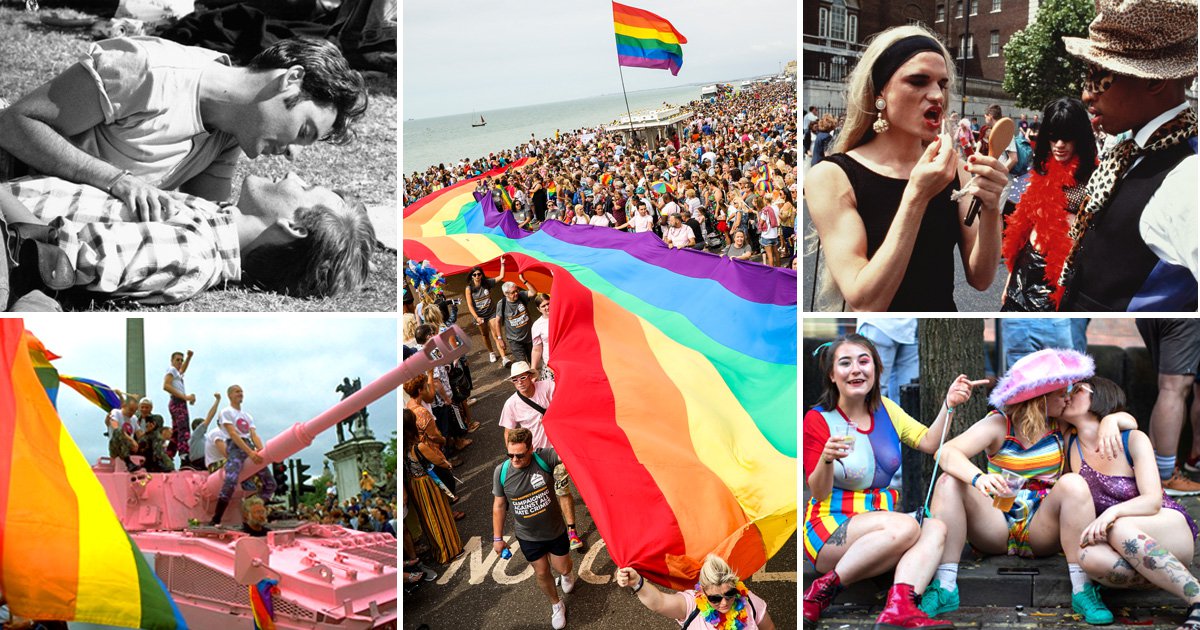 The UK’s first ever Pride demonstration took place in July 1972 – three years after the LGBTQ+ community fought back against police harassment in New York’s Stonewall riots.

The 1972 march was attended by around 700 participants in London – but in the 50 years since, Pride has exploded into a landmark fixture on the British calendar and is now celebrated in cities and towns across the country.

Now featuring a yearly dose of protest, colour, marches, dancing, frivolity and, of course, fabulous style, the evolution of Pride over the last half a century has been remarkable.

This Pride month, Metro.co.uk is being guest edited by a series of key figures from the LGBTQ+ world – with activist Peter Tatchell in charge of news today.

As part of the series, we are taking you through 50 of our favourite photos from the last 50 years of Pride in the UK – including a couple of shots of Peter.

First up, we look back on a few older images – including some from the 1972 event – and offer up a taster of the campaigning on display over the years.

Though still underpinned by activism and campaigning for LGBTQ+ rights, Pride became increasingly mainstream as the years went by.

Groups like the police, seen by some as persecutors of the LGBTQ+ community, now regularly play a supportive role, while many celebrities make a point of showing their faces – including a rather confused looking current prime minister (see below).

The event also became more commercial, as big companies made efforts to link their brand to the cause, which has led to accusations of them both supporting Pride and gaining good PR from their involvement.

Rainbow flags and colours became synonymous with Pride and solidarity with the LGBTQ+ community in the UK and worldwide.

We take your through some of these themes in the photos below.

Alongside the activism and LGBTQ+ human rights demands on display, there is also plenty of good old fashioned fun at Pride.

It is seen as an event where the LGBTQ+ community can be themselves in a safe space, without the discrimination many still face in daily life.

Below are some of our favourite shots, proudly showing inclusivity, good humour, cheek, fun and support for LGBTQ+ human rights.

This year’s London event, on Saturday, July 2, 2022, promises more of the same: party and protest. We hope to see you there.

To celebrate 50 years of Pride, Metro.co.uk has teamed up with Kyiv Pride to raise money for their important work in Ukraine.

Despite war raging around them, Kyiv Pride continue to help LGBTQ+ people, offering those in need shelter, food and psychological support.

We will be splitting the cash with a grassroots charity closer to home.

You can donate here

And we’ve got some great names on board to help us, too. From a list of famous guest editors taking over the site for a week that includes Rob Rinder, Nicola Adams, Peter Tatchell, Kimberly Hart-Simpson, John Whaite, Anna Richardson and Dr Ranj, we’ll also have the likes Sir Ian McKellen and Drag Race stars The Vivienne, Lawrence Chaney and Tia Kofi offering their insights.

During Pride Month, which runs from 1 – 30 June, Metro.co.uk will also be supporting Kyiv Pride, a Ukrainian charity forced to work harder than ever to protect the rights of the LGBTQ+ community during times of conflict. To find out more about their work, and what you can do to support them, click here.