BERLIN — With less than six months to go before Germans cast their ballots for a new chancellor, the political vacuum Angela Merkel leaves behind after 16 years of consensus-oriented leadership is coming more sharply into focus.

A rare and rancorous power struggle has gripped Germany’s conservatives this week as two rivals vie to replace her, threatening to further hobble her Christian Democratic Union, which is already sliding in the polls.

Normally, Armin Laschet, 60, who was elected in January to lead the party, would almost assuredly be the heir apparent to Ms. Merkel. Instead, he finds himself unexpectedly pitted against his biggest rival, Markus Söder, the more popular head of a smaller, Bavaria-only party, the Christian Social Union, in a kind of conservative family feud.

Experts and party members alike are calling for the dispute to be resolved within the coming days, as it risks damaging the reputation of the two conservative parties, jointly referred to as the Union. Because the two parties operate as one on the national stage, they must choose one candidate for chancellor.

“Armin Laschet and Markus Söder must finally understand their responsibility toward the Union,” Tilman Kuban, head of the Young Union, told the Bild daily on Thursday. “If they continue to tear one another apart as they have in the past few days, together they will ensure that there won’t be much left of the Christian Democrats or the Christian Socialists in the future.”

Leading Ms. Merkel’s party would have once been seen as an advantage for Mr. Laschet, but it has recently become a drag. With a botched vaccine rollout and a confusing response to the pandemic, support for the conservatives has plunged by 10 percentage points since the start of the year.

After a series of personal gaffes, Mr. Laschet’s popularity has been dropping. In his home state of North Rhine-Westphalia more than half of the population have said they are not happy with his performance, and a poll this week showed only 4 percent of Germans nationwide see him as “a strong leader.” 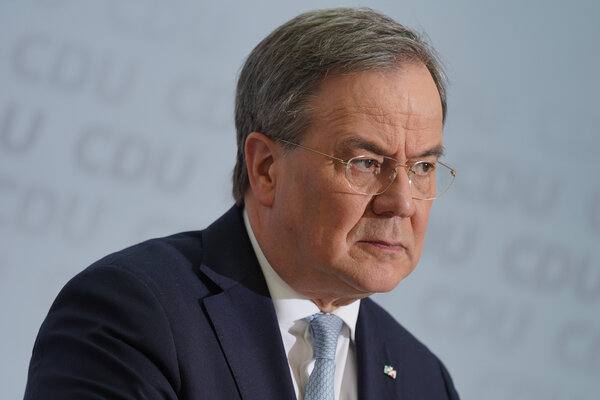 At the same time, Mr. Söder, 54, who is also governor of Bavaria, has artfully used several appearances alongside Ms. Merkel after pandemic-related meetings to burnish his image as a man in charge, capable of tackling tough issues and getting things done.

A full 57 percent of Germans said Mr. Söder displayed the qualities of “a strong leader.”

Keenly aware of his popularity, Mr. Söder began openly pushing for the candidacy earlier this week, citing his strong, stable showing in the polls over Mr. Laschet, despite warnings from senior conservatives that public opinion could be fickle.

“At the end of the day, the conservative parties have to make an offer that will be acceptable to voters and the people, and not just a few party functionaries,” Mr. Söder told Bavarian public television. “Of course polls are not everything, but if after several months a clear trend emerges, it cannot just be ignored.”

After leading conservative lawmakers discussed the issue on Sunday, Mr. Söder said he was willing to run, if the Christian Democrats would support him. If not, he added, he would cooperate, “without any grudges.”

But on Monday, after the boards of each party had backed their own leader, Mr. Söder suddenly changed his position. He continued to push for his right to run for chancellor during a closed-door meeting of conservative lawmakers on Tuesday. After four hours of discussions, nearly two-thirds of those present expressed their support for the Bavarian leader — including members of Mr. Laschet’s party.

In a country that views the art of compromise as a valuable skill for a leader, the public game of political chicken could come at a high price. At a time when the environmentalist Greens have rapidly risen in popularity and are now nipping at the conservatives’ heels, they can ill afford such a public display of disharmony.

“At the end of the day, both have to decide between themselves. There is no set procedure that clearly defines how this will end,” said Prof. Thorsten Fass, a political scientist at Berlin’s Free University. Regardless of who runs as the candidate, the damage of the fight will still have to be repaired, Professor Fass said. “It is not a good way to start an election year.”

Both contenders have said they would like the matter to be decided by the end of the week, and pressure from inside both parties is growing for a quick resolution.

Four other political parties are vying to win the most votes on Sept. 26 and seize power by forming a government and naming a chancellor.

The center-left Social Democrats, who have been the junior party in Ms. Merkel’s government coalition since 2017, have already named the finance minister and vice-chancellor, Olaf Scholz, as their choice for chancellor. The Greens, currently polling as the second-strongest party ahead of the Social Democrats and close behind the conservatives, are scheduled to announce their candidate on Monday.

Not everyone is ready to count out Mr. Laschet yet. He is a politician whose recent successes, winning the governorship of North Rhine-Westphalia over a well-liked incumbent and the monthslong race for the Christian Democrat leadership in January, both saw him grasping victory after coming from behind.

Mr. Laschet also has the backing of some of the most senior and influential members of his party, including the former finance minister Wolfgang Schäuble, who has been around since the first time the conservatives split over a chancellor candidate in 1979.

“If Laschet has the nerve and still has his party’s leadership behind him, then Söder could say that he accepts this, then use his position to negotiate a strong minister post for his party in a potential future government,” said Ursula Münch, director of the Academy for Political Education in Tutzing.

On the other hand, if enough pressure from within the party builds on Mr. Laschet, he could concede to Mr. Söder for the sake of the party and the need to move ahead. That would hand the Bavarian leader a victory that would serve to enforce his reputation as a sharp-witted maverick who will change his policies to fit the public mood. As public favor in Bavaria shifted from the far-right Alternative for Germany party to the environmentalist Greens, he abandoned an anti-immigrant stance and embraced a push to save honey bees, to the ire of farmers who have long formed the grass roots of his party.

“He is intelligent, quick and rhetorically strong,” Ms. Münch said of Mr. Söder. “He is able to push people into a corner while keeping a back door open for himself, and in that sense, Laschet can’t hold a candle to him.”