A ham sandwich is seized by customs officials from a truck driver entering the Netherlands by ferry from Britain despite the man’s fervent pleas to at least leave him the bread.

Other customs officials rummage through bags in a car trunk, debating whether they should seize a tin of possibly contraband sardines.

The scenes, broadcast by a current affairs program in the Netherlands, showed the strict enforcement of post-Brexit import rules after Britain completed its separation from the European Union on Dec. 31 and new arrangements for travel, trade, immigration and security cooperation took effect.

“Welcome to the Brexit, sir,” one of the customs officers says to the truck driver, laughingly. “Can you take the meat and leave me the bread?” the driver pleads fruitlessly. “I’m sorry,” the officer replies. 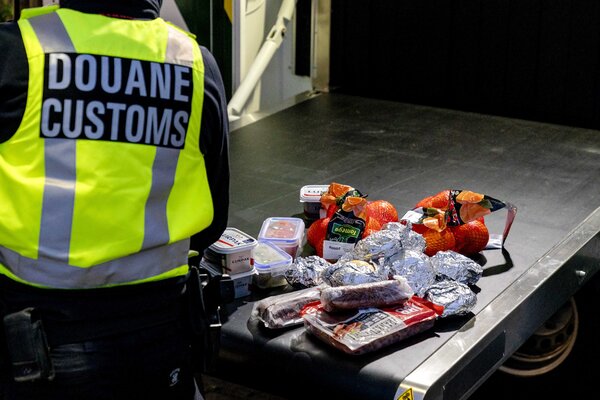 “We are simply executing regulations. As of Jan. 1, it is no longer allowed to bring in perishable goods from the United Kingdom for travelers,” said Bob van ’t Klooster, a spokesman for Dutch customs. He insisted this was not nit-picking.

“We have the same regulations for people coming in from the U.K. at Amsterdam airport.”

Because of the pandemic, the effects of the separation are yet to be fully felt. There is still relatively little traffic between Britain and mainland Europe.

But the Dutch current affairs program “EenVandaag” followed a team of customs officials working at the Hoek van Holland port as about a hundred passengers disembarked after a nearly seven-hour ferry ride from the port of Harwich in England.

The program quotes Rien de Ruijter, a team leader at the local customs site, who said that while volumes of travelers were now low, he expected waiting times and frustration to increase when travel restrictions were lifted.

“Customs policies have changed,” he said, “but this is not being communicated in England.”

In another scene in the program, a customs official seizes a tin of sardines, proclaiming that fish is not allowed. But it turns out that the official himself was not entirely familiar with the new regulations: Travelers are allowed to bring a total of 20 kilograms, about 44 pounds, of fish into the E.U.

“This is not 20 kilos,” another official concludes, looking at the tin.

“I don’t think that anyone in the United Kingdom had ever expected this. But this is the Brexit,” Mr. De Ruijter said. “This is the new reality we have to deal with.”