MATESEVO, Montenegro — One of the world’s most expensive roads slices through the mountains of Montenegro, soaring over deep gorges on towering bridges, before reaching its destination: a muddy field outside a hamlet with a few dozen houses, many of them empty.

Mirka Adzic, a resident of the hamlet, Matesevo (population: around 15), said she was delighted there would soon be a modern expressway so close to home as it would save her from having to take a treacherous mountain track, previously the only access to the outside world.

But, much as she likes the new Chinese-built expressway — which is supposed to open in November at a cost of nearly $1 billion after six years of hazardous work, two years behind schedule — she doesn’t really understand it.

Struggling to support a family on her husband’s meager salary as a driver for the Chinese construction company that built the road, she is baffled that her country, one of Europe’s poorest, has committed so much money to a gargantuan, state-of-the-art engineering project. Montenegro is now saddled with debts to China that total more than a third of the government’s annual budget.

Ms. Adzic is not alone. Montenegro’s new prime minister, Zdravko Krivokapic, who took over late last year from the government that signed the road and loan contracts with China in 2014, described the highway as a “megalomaniac project” that “goes from nowhere to nowhere” and badly strained his country’s finances.

It has also plunged China into the convoluted geopolitical struggles of the Balkans. Montenegro, which infuriated Russia, a close friend of China, by joining NATO in 2017, is now struggling to balance heavy debts to Beijing with its ambitions to align more closely with the West.

Hailed by China as an early triumph for its Belt and Road Initiative, a huge infrastructure program announced in 2013 by the Chinese leader, Xi Jinping, the Montenegro highway fused China’s oversize ambitions with those of Milo Djukanovic, the Balkan nation’s prime minister when work on the road started.

But, with Mr. Djukanovic’s party no longer in charge for the first time in 30 years after elections last year, the highway has become a lightning rod for accusations of waste, graft and bloated ambitions that are out of sync with economic reality.

“I have no proof yet, but all this indicates corruption,” Mr. Krivokapic, the new prime minister, said in an interview in Podgorica, the Montenegrin capital. “From the economic side, this highway is probably not cost-effective.”

Under the original plan, the 25-mile stretch built by China was to be part of a proposed 100-mile highway linking the port city of Bar on the Adriatic Coast to the border with Serbia. The route promised to make Montenegro, a nation with just 600,000 people, a transport hub for the Balkan region and to bolster economic activity in the country’s deprived north. 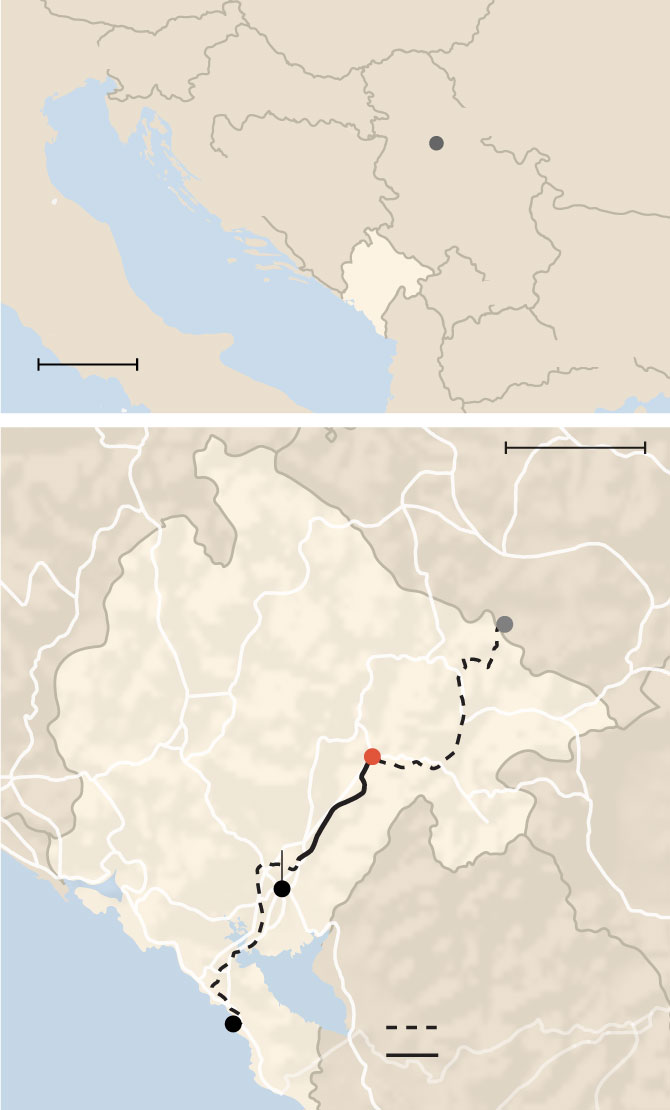 But with the highway petering out in the middle of a largely uninhabited forest and no funds available to extend it, the venture has generated a surge of speculation about Chinese goals in the Balkans and the motives of the previous government that signed up for it.

Dritan Abazovic, the deputy prime minister responsible for security, said in an interview that he “has nothing against China,” which “just wants to be present in the region.” But he questioned the wisdom of taking out a huge loan from China in order to hire a Chinese company that imports Chinese workers and then “takes all the money back to China” — a typical practice for Chinese infrastructure companies working abroad.

Mr. Abazovic, who in March visited Brussels to appeal for help from the European Union in refinancing the Chinese loan, added: “They made an incredible deal for the interests of China. For our side, it was a disaster.”

Mr. Djukanovic, who presided over the deal, ruling Montenegro from 1990 until his party’s election defeat last year, dismissed the new government’s complaints as “political noise,” insisting in an interview that China has no interest in meddling in Montenegro’s affairs.

Over his long career, Mr. Djukanovic has thrived by playing off rival powers, aligning first with Serbia under Slobodan Milosevic, and then with wealthy investors from Russia, including tycoons close to the Kremlin. Later, he turned to the United States, which overlooked his past in order to get Montenegro to join NATO, while also reaching out to China, which offered loans that neither American nor European banks thought wise.

He led Montenegro to independence in 2006, making it the last former republic of Yugoslavia to become a separate state.

Now out of power, though he still holds the largely ceremonial post of president, Mr. Djukanovic has presented the ruckus over the Chinese-built highway as another twist in what he views as Russian scheming to assert influence in Montenegro. Pro-Moscow members of Parliament are not represented in the new government, but, out of hostility to Mr. Djukanovic, they generally support it.

By assailing the Chinese highway, Mr. Djukanovic said, those lawmakers help Russia’s ambitions to “halt the enlargement of NATO and also of the European Union in the region.”

Having switched his own allegiances so many times, Mr. Djukanovic inspires little trust in Montenegro, especially since his own government enveloped the highway project in a thick cloud of secrecy. “It sometimes seems as if they are building a rocket base, not a road,” said Dejan Milovac of MANS, a Montenegrin research group focused on anticorruption work and a longtime critic of the highway.

A 2014 loan agreement with Exim Bank of China, a state lender, has been made public — and it revealed that China could seize property in the event of default as it did in Sri Lanka, where it grabbed the main port after the country fell behind on a Chinese loan. But nearly all other documents relating to the Montenegrin highway have been classified as secret.

When Mr. Djukanovic first floated the idea, several foreign companies, including Bechtel, the American engineering and construction giant, expressed an interest. Bechtel proposed a more modest and less costly project but lost out to a more expansive and far more expensive proposal from China Road and Bridge Corporation.

Robert Gelbard, the Clinton administration’s Balkans envoy, recalled advising Mr. Djukanovic that he should be wary of hiring the Chinese company, telling him that Poland had recently canceled its own highway contract with another Chinese firm and was suing it over shoddy work.

Mr. Djukanovic said China Road and Bridge Corporation had been chosen simply because it submitted “the best bid.” The company declined to make its staff available for interviews, and its head office in Beijing did not respond to written questions.

The financing, however, has caused severe headaches for Montenegro. A loan provided by Eximbank to fund the project was denominated in dollars, which made Montenegro, which uses the euro, vulnerable to the vagaries of foreign exchange markets. Interest was set at 2 percent a year, far higher than what European lenders usually charge for infrastructure loans.

“It was a horrible deal, obviously,” said Milojko Spajic, Montenegro’s new finance minister. He recently negotiated a so-called swap deal with European and American banks that effectively converted the Chinese dollar loan to euros with an interest rate of .87 percent. Montenegro made its first payment on the Chinese loan last month and, Mr. Spajic said, will not default.

A 2012 study led by a British company for Montenegro’s Ministry of Transport warned that construction costs would be unusually high because of the mountainous terrain. Even so, its cost estimates were considerably lower than the more than $900 million charged by the China Road and Bridge Corporation to build the 25-mile, but particularly difficult, stretch of the highway.

An earlier feasibility study, in 2007, by Louis Berger, an engineering company in Paris, warned that traffic along the proposed highway would not be “high enough to justify” investment “from a purely financial basis.” But it added that “social, political and economic” factors “should be considered before making a decision on whether to continue with the proposed program.”

Nearly $280 million, more than half of the total amount of money paid to local subcontractors, has gone to a single Montenegro company, Bemax, formally owned by a onetime cafe owner who, before he moved into road building, had no previous experience in engineering work, according to MANS, the research group.

Nebojsa Medojevic, a member of Parliament, claimed that Bemax was in reality owned by a close adviser of Mr. Djukanovic, Milan Rocen, a former ambassador to Moscow. Mr. Djukanovic denied this, saying he had “of course” asked his adviser and been assured the claims were false. Mr. Rocen has himself categorically denied owning Bemax.

“We joked about it,” Mr. Djukanovic said. “It is just speculation by political opponents.” Accusations of corruption, he added, “have nothing to do with reality in my case.”

The new government says it would like to finish building the full length of the highway, preferably with funding from Europe instead of China, and will not leave it stranded in the empty forest.

With their stretch of the road now nearly finished, many Chinese workers have left. Those that remain seem skeptical that the whole highway will ever be built.

“Montenegro is too poor. They don’t have enough money to keep going,” scoffed Shen Wei, a worker from Henan Province in central China, standing outside a nearly deserted construction camp. “I just want to go home,” he added.