BERLIN — Germany took its first step into a new world on Saturday, choosing the next leader of Angela Merkel’s conservative party ahead of fall elections that will decide who succeeds her as chancellor.

In normal times, Armin Laschet, the longstanding Merkel ally who was elected to lead the party, the Christian Democratic Union, would almost certainly succeed her as chancellor of Europe’s most powerful country.

But these are not normal times.

Ms. Merkel has been the dominant political force and a face of stability in the country for more than 15 years. She has served as leader of Germany and leader of Europe, steering the continent through successive crises. On her watch, Germany rose to be a dominant political and economic force in Europe for the first time since World War II.

At a time of exceptional fragility in United States democracy, violently on display in the riot at the Capitol last week, many inside and outside Germany are awaiting Ms. Merkel’s departure with some trepidation.

“Merkelism has been the antidote to Trumpism,” said Andrea Römmele, the dean of the Berlin-based Hertie School of Governance. “With both Merkel and Trump leaving office this year, the big question is: Whose legacy will win?” 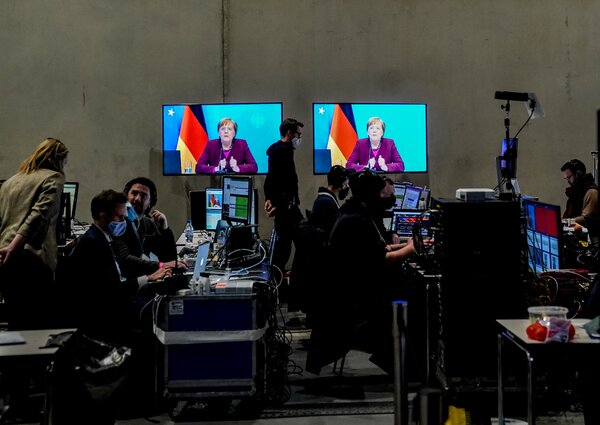 In Germany, the future direction of conservatism and the country itself is up in the air. The person who will ultimately take over as chancellor will shape both.

Mr. Laschet is considered to be on the more liberal flank of the Christian Democrats and has been a loyal ally to Ms. Merkel. Currently governor of North-Rhine Westphalia, Germany’s most populous state, he notably supported her decision to welcome more than a million migrants in 2015.

Promising both continuity and change, Mr. Laschet appealed to delegates on Saturday in a speech that was personal but also sweeping. He referred to his father’s past as a miner, and urged fellow conservatives to learn from the democratic crisis playing out on the other side of the Atlantic.

“Continuing to be successful doesn’t mean continuing the same way,” Mr. Laschet said. “The headwinds are much tougher. The forces against us have become a lot stronger,” he added. “We will have to do a lot of things differently and in a novel way after the pandemic.”

Yet there is no guarantee that Mr. Laschet will be chancellor, even though the party is expected to win the largest share of votes in the coming election.

At about 37 percent, opinion polls currently give the Christian Democrats nearly twice the level of support of any other political party. The liberal, pro-refugee Greens come second at about 20 percent, followed by the Social Democrats, Ms. Merkel’s longstanding coalition partners, with about 15 percent.

The far-right Alternative for Germany party has plateaued at about 10 percent since the onset of the pandemic.

It is unclear how much of the Christian Democrats’ lead is a reflection of Ms. Merkel’s popularity — and therefore how stable it is. Mr. Laschet, who lags far behind the chancellor in surveys, acknowledged as much.

“There are a lot of people who above all like Angela Merkel and only after that the C.D.U.,” Mr. Laschet said. “The reputation of the chancellor here and abroad can be summarized in one word: trust.”

“We now need this trust as a party,” he said. “This trust cannot be given as a gift, it cannot be inherited, it can’t be just handed down. This trust needs to be earned. Tough words or nice words aren’t enough.”

Analysts like Ms. Römmele said that the party’s popularity might fizzle when it sinks in that Ms. Merkel is really leaving. “The election in the fall is wide open,” she said.

It is for this reason that the Christian Democrats will not settle the question of who will lead the party into the next election as prospective chancellor until March or April, after a couple of important state elections that will give an indication of how voters react to Mr. Laschet as party leader.

Mr. Laschet, 59, takes over as party leader from Annegret Kramp-Karrenbauer, the defense minister, who had been handpicked by Ms. Merkel to succeed her in 2018 and narrowly won a leadership contest at the time. After failing to cement her grip on the party and inspire voters, she announced her decision to step down last year.

If Mr. Laschet proves equally unpopular, he might come under pressure to cede the chancellor nomination to one of two other possible candidates who have yet to declare their intentions to run; Jens Spahn, Ms. Merkel’s health minister, and Markus Söder, the leader of the state of Bavaria.

Both men are relatively young, ambitious and the only politicians in the country whose approval ratings match Ms. Merkel’s. And both have evolved from fierce Merkel critics on the right of the conservative spectrum during the 2015 migrant crisis into loyal allies.

Mr. Spahn, who backs Mr. Laschet, might yet turn into the favorite, some pundits predict. Yet Mr. Söder, who spoke at the party’s virtual conference on Friday evening, beats all other candidates in opinion polls.

Asked which candidate for chancellor might win the conservatives an election result comparable to its current lead in the polls, Herfried Münkler, a political commentator, did not miss a beat: “Either Spahn or Söder.”

Whoever ends up securing the nomination for chancellor, it appears likely to be a Western German Catholic man who will cut a very distinct figure from Ms. Merkel. A Protestant vicar’s daughter from the former Communist East, the chancellor has shaped today’s Europe more than perhaps anyone else.

“You can definitely say that Ms. Merkel, who stands for a certain type of leadership — listening deeply, having a lot of patience, moderating, someone who has an incredible talent for accommodation — that this person in this position is not replaceable,” said Mr. Münkler, a political scientist at Humboldt University in Berlin. “In that sense, an era is ending.”

“It doesn’t change the role of Germany,” he added, “but it will change the way Germany brings its weight to bear inside the European Union.”

For all its potential consequences, Saturday’s party leadership election was overshadowed by a rising wave of coronavirus infections in Germany. The pandemic delayed the party conference twice, and in the end the Christian Democrats held it online with 1,001 party delegates representing chapters across the country.

For all the uncertainty hanging over German politics this year, some supporters and critics of the chancellor say that after four legislative terms with her at the helm, it is time for a change.

“Merkel’s departure is the end of a very good period in German history,” said Timothy Garton Ash, a professor of European history at Oxford University. “She has been the personification of the best Germany we’ve ever had,” he added. “But she hasn’t got everything right.”

Ms. Merkel’s leadership has, at times, lacked vision and ambition, Mr. Garton Ash said, including being cautious about deeply overhauling the European Union, challenging autocratic leaders in countries like Hungary and moving Germany into a digital and ecologically sustainable future.

If, as many expect, the Christian Democrats end up going into coalition with the Greens, it might toughen Germany’s stance on China and Europe’s budding autocrats and force its own industry into a more digital and greener future.

In that sense, Mr. Garton Ash said, “The shape of the next coalition matters more than the personality of the next chancellor.”