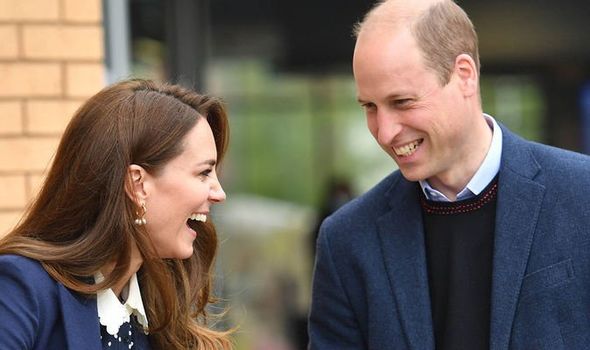 Kate and Prince William are marking Mental Health Awareness Week by carrying out a number of engagements in Wolverhampton. First, they headed to The Way Wolverhampton Youth Zone, which aims to help young people transform their lives.

During their visit, Kate and William challenged one another at a ping pong game.

A video shared by the Duke and Duchess of Cambridge’s official Twitter account shows Kate smiling as she scored against William.

The Cambridges’ Twitter account joked about the Duke’s performance, saying: “Today’s visit is all about understanding local organisations here in Wolverhampton.

“Organisations that are motivating and inspiring young people to transform their lives. #MentalHealthAwarenessWeek.

The Duchess of Cambridge has made children’s mental health and children’s development the cornerstone of her royal work.

In 2018, she launched a steering group to look in depth at the impact the experiences made during the early years of a child have on their development and adult life.

Her work behind the scenes resulted in the nationwide 5 Big Questions on the Under Fives launched in January last year and the following study, presented in November during a special forum hosted by the Royal Foundation.

Tomorrow, Kate and Prince William will lead a host of celebrities during the Mental Health Minute broadcast.

The Duke and Duchess have recorded a 60-second message marking this week of mental health awareness.

Celebrities who signed up to this initiative include David Beckham, Dame Shirley Bassey and Charles Dance.

The message will encourage everyone around the UK to keep talking about mental health, highlighting how vital one conversation can be for someone struggling with issues.

It will be broadcasted across every radio station in Britain at 10.59 on Friday.

This initiative was created by Radiocentre in collaboration with the Royal Foundation.