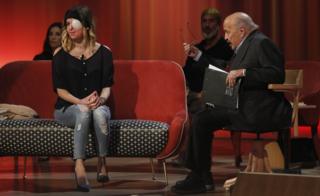 A former Miss Italy finalist has gone on national TV three months after acid was thrown in her face, allegedly by an ex-boyfriend.

Gessica Notaro, 27, was badly scarred and is in danger of losing the sight of an eye. Her former boyfriend is in custody.

On the TV show, to be broadcast late on Thursday, the former model took off a scarf covering her face.

Ms Notaro was initially told by renowned talk show host Maurizio Costanzo that she could keep the scarf on if she preferred. But she said she would rather remove it and that everyone had to see.

Her face has been badly disfigured and she has had several operations, including one aimed at saving the sight of her left eye, which is still bandaged.

The women fighting back after acid attacks

Ms Notaro works as a sea-lion trainer at a dolfinarium in the Adriatic resort of Rimini, She spent two months in hospital after the January attack and is now in constant pain.

Her story caught the public imagination and she has revealed her suffering on social media. She hopes to start a singing career with the launch of an album.

She broke up with her boyfriend, Jorge Edson Tavares, last summer.

After she went to police to complain that she was being stalked, a restraint order was imposed on him.

He has denied any involvement in the 10 January acid attack.

“While the acid ate away at my face I was on my knees praying,” she told Maurizio Costanzo. “I prayed to God: take away my beauty but at least leave me with my sight.”

For Italians, the attack is reminiscent of the case of a lawyer, Lucia Annibali. Her face was scarred when her ex-boyfriend paid two men in 2013 to throw acid in her face.

Both cases have highlighted violence against women in Italy.

During the recording of the talk show, Justice Minister Andrea Orlando said he would meet Ms Notaro on Thursday.