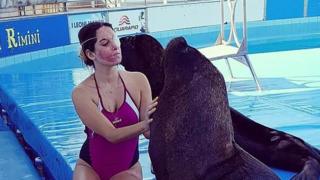 A former Miss Italy finalist has returned to work as a sea lion trainer, five months after being severely disfigured by acid thrown in her face.

Gessica Notaro, 28, said that she was doing so to encourage other women to fight back against bullying.

She posted a picture of herself on social media with sea lions at the aquarium where she works in east Italy.

Her former boyfriend is being prosecuted over the attack but denies any involvement.

Ms Notaro is scheduled to host the aquarium’s night-time performances later this year at the Adriatic resort of Rimini.

She was in danger of losing the sight in her left eye in the aftermath of the attack.

Ms Notaro has had several operations since, and her injured eye remains bandaged.

In a Facebook post she said: “My strength? Here it is,” as she touched a sea lion.

Ms Notaro’s story caught the public imagination when she revealed her suffering on social media.

“While the acid ate away at my face I was on my knees praying to God to take away my beauty but at least leave me with my sight.”

After she went to police to complain that she was being stalked, a restraint order was imposed on him.

On 10 January the former finalist was doused in hydrochloric acid by a man she identified as Mr Tavares.

He has strenuously denied any involvement in the attack.