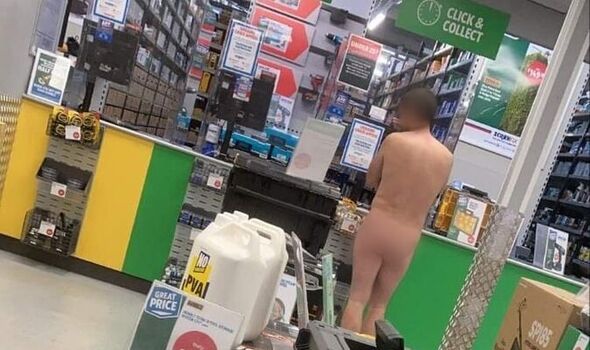 Upon entering the store, the man politely greeted other customers and waited for a staff member, who had started his first day on the job, to serve him.

A customer in the store at the time, Izaak Burns, said: “He looked at me and said, ‘All right’ and went to the counter like it was a completely normal thing to do.

“The kid behind the counter was on his first day and was in a state of shock.

“After he left he just walked off down the road.”

The customer called police following the incident at around 6.30pm in Macclesfield, Cheshire.

A 33-year-old man was detained and questioned by police.

A statement from Cheshire Police following the incident read: “At around 7pm on Tuesday, March 29 police received a number of complaints in relation to a man who was not wearing any clothes at a DIY store in Macclesfield.

“A 33-year-old man from Bosley was subsequently arrested on suspicion of behaviour likely to cause alarm or distress, in connection with the incident.

“The man has since been released under investigation pending further enquiries.”