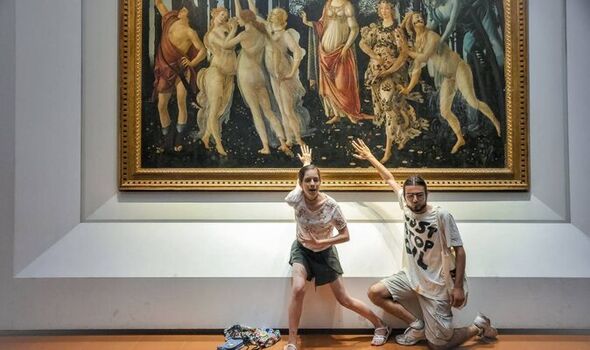 Two protesters, one wearing a Just Stop Oil T-shirt, stuck their palms to glass protecting the artist’s 550-year-old work Primavera at the Uffizi gallery while a third helped unfurl a banner. No damage was caused to the painting and a man and two women, who had paid for tickets to get into the gallery, were taken away by police.

Meanwhile, eco-protest groups have vowed to band together this autumn to bring Westminster to a standstill and drive the police to “breaking point.”

They hope to force the Government to reduce energy bills while banning the extraction of fossil fuels.

Organiser Gabby Ditton, 28, from Norwich, said: “The idea is we’re getting normal people dipping a toe in civil disobedience, and sitting in the road is really the first step.”

“Hopefully, everyone will come back in October where the plan is to get thousands arrested.”

Russ Peterson, an Extinction Rebellion member who travelled from Northampton, said he was marching for his children and grandchildren.

He said: “Look at what we’re doing to the planet and what they’re going to have to live with.”