Many donned red boiler suits and black facemasks to play children’s games with other demonstrators dressed as world leaders including Xi Jinping and Boris Johnson in Glasgow.

‘Vladimir Putin and Joe Biden’ could be seen tussling with an inflatable Earth, while protesters also played climate hopscotch, tug-of-war and rolled dice.

Squid Games follows a dad who is drowning in debt so decides to compete against hundreds in six rounds of brutal children’s games to win a huge payout.

The demonstration opposite the Scottish Event Campus (SEC) was designed to tell decision makers the ‘time for climate games is over’, the Glasgow Actions Team, which organised it, said.

COP26 got off to a disappointing start yesterday when Indian Prime Minister Narendra Modi pledged to cut emissions to net zero by 2070 – twenty years too late, according to scientists.

Experts have warned every single country faces catastrophic consequences if world leaders do not commit to the earlier date of 2050. 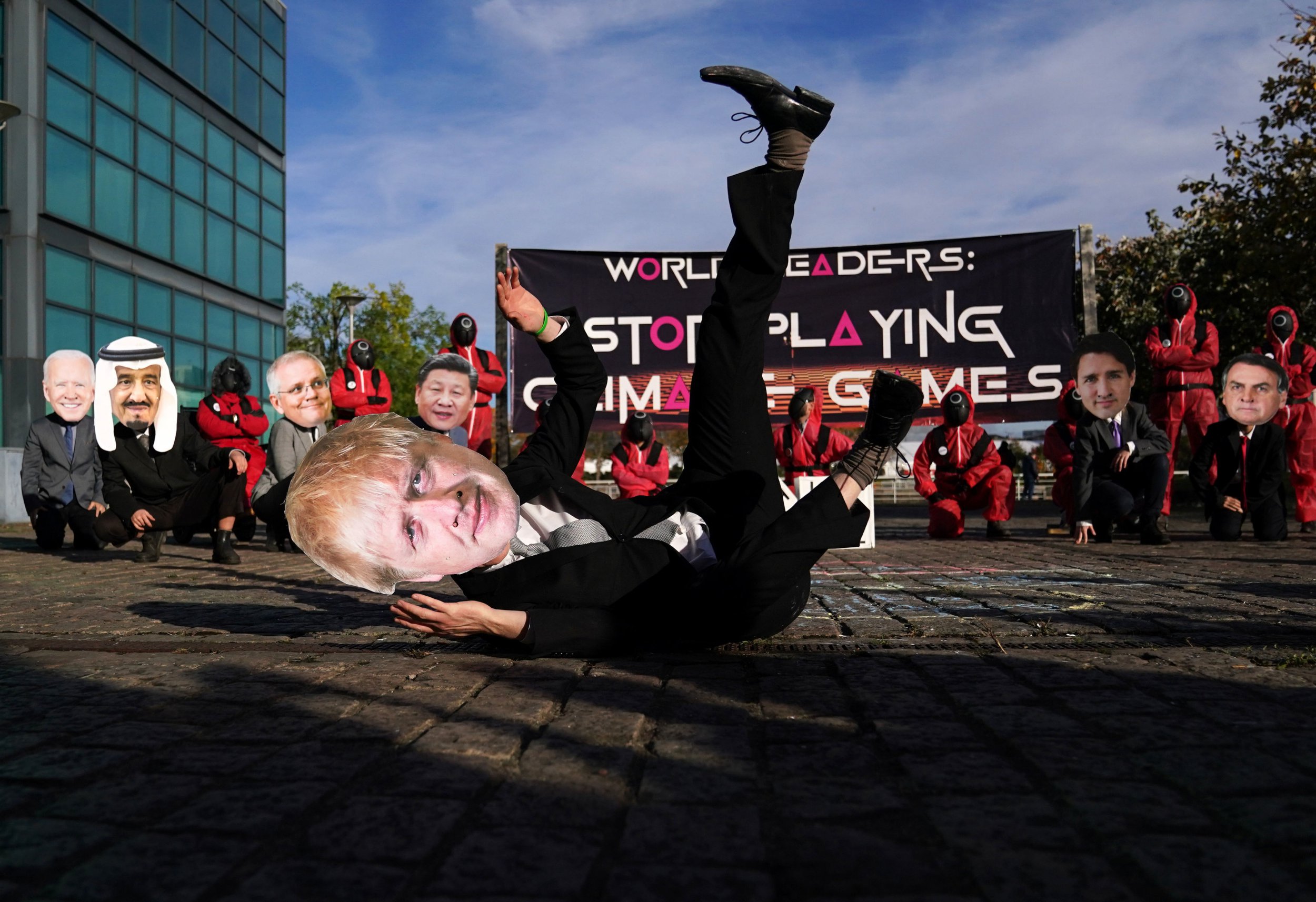 Some businessmen and dignitaries took private jets to Scotland to discuss how countries can limit the impact on the environment.

Tuesday saw more than 100 world leaders vow to end and reverse deforestation by 2030 in a multi-billion dollar deal.

Amazon founder Jeff Bezos – one of the attendees who flew in on a private jet – pledged $2 billion (£1.5 billion) to restoring nature today.

The Queen has advised world leaders to ‘rise above the politics of the moment, and achieve true statesmanship’.

Malcolm White, 34, who dressed as Boris Johnson for the Squid Games protest, said: ‘They’re here, they’re using lots of rhetoric, but they’re not actually, so far, engaging with the discussion process at the level which we think is in keeping with the climate crisis we are all facing.’

Chris Venables, 32, the head of politics at the Green Alliance, added: ’I think often these events will feel like a circus and they can feel like a game, but obviously it’s actually about the lives of millions of people across the world and indeed here in the UK.’

Meanwhile, Fatima Ibrahim, 28, co-founder of the Green New Deal Rising movement, said COP26 has delivered ‘a bunch of rhetoric and some big promises’.

But world leaders ‘have not delivered’ on these in the past, she added.

She said: ‘What we want is for world leaders to go home, put an end to all new fossil fuel infrastructure, and put a real investment in the green economy, and deliver green jobs for millions of ordinary working people who need a stake in the transition.’