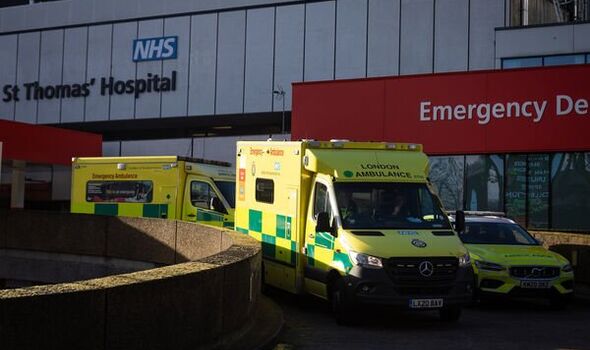 Paul Turner said funding and resources are falling far short of the unprecedented demand for help across the country – and leaving health staff “absolutely battered”.

“We’re getting to the point where patient safety is becoming a concern,” he added.

His plea from the front line came as latest NHS data showed A&E and ambulance performance had dropped to the worst levels on record.

The average ambulance response time last month for the most urgent incidents – life-threatening illnesses or injuries – was nine minutes, 35 seconds. That was up from eight minutes and 51 seconds in February and the longest since records began in 2017.

Mr Turner, GMB union deputy branch secretary for North West Ambulance Service, said: “Some patients get aggressive, they take it out on you.”

“The attitude is, ‘I’ve been waiting five hours for this ambulance’. I know that and I’m really sorry, but unfortunately, we’ve got a queue.

“Sometimes that queue can be 12 hours.”

Between December and March, the NHS dealt with a record 3.5 million 999 calls.

This included 304,000 of the most serious category one calls – a fifth higher than any other winter on record.

He added: “I personally called an ambulance the other day. I rang 999 and it’s the first time in my entire life I’ve been put on hold.”

But he said crews and management are not to blame – they simply do not have the resources to cope.

He urged the Government to rethink NHS funding and base decisions on where demand is highest.

He said: “We need more staff and more ambulances because it’s just not working. We are absolutely battered.

“It’s not just North West, it’s right across the country. We need that funding.”

When patients do get to hospital, many face another long wait. Last month a record 22,506 waited more than 12 hours in A&E to be admitted. The monthly figure was up from 16,404 in February and the highest since August 2010.

Writing for us, the President of The Royal College of Emergency Medicine Dr Katherine Henderson also warns the system is in crisis.

She says the causes include a lack of social care support and shortages of hospital beds and staff.

Covid is also still limiting capacity, with more than 15,000 patients in hospital.

Dr Henderson says: “Doctors, nurses and paramedics want to deliver the best care possible, but the current state of the health service is preventing this.

“It is failing staff and ultimately failing patients.”

Meanwhile, the NHS treatment waiting list climbed to a record 6.2 million in February. Of those, 299,500 people had been waiting for longer than a year, a figure which has fallen from 311,500 in January.

But he added: “Nobody should be under any illusion about how tough a job NHS staff have on their hands.”

Emergency care is in crisis. A&Es have warned of severe pressures and delays.

Patients are waiting extremely long times for emergency care – at home, in ambulances and in crowded waiting rooms.

While the pandemic had its impact, this is the result of three long-term issues being ignored.

When they do end up in hospital, they often need social care support to return home.

But there is a huge shortage of carers and existing carers are underpaid. This means many patients stay in hospital for longer than needed as there is no help available at home.

And it means hospital beds are not available to other patients who need them.

This lack of beds, staff and social care means patients face incredibly long waits for beds. It means ambulances cannot hand over patients to A&Es. It leads to long waits in crowded A&Es.

Crucially, it leads to compromised and undignified care. No doctor wants to treat a patient in a corridor or back of an ambulance or leave them for hours without being seen.

NHS staff want to deliver the best care possible but the state of the health service is preventing this. It is failing staff and ultimately failing patients.

The Government must fix social care in a meaningful way. It must set out a funded NHS workforce plan. And it must open 10,000 beds.