Protests took place worldwide, but those in Germany had heightened urgency amid calls for the next government to do something about climate change. 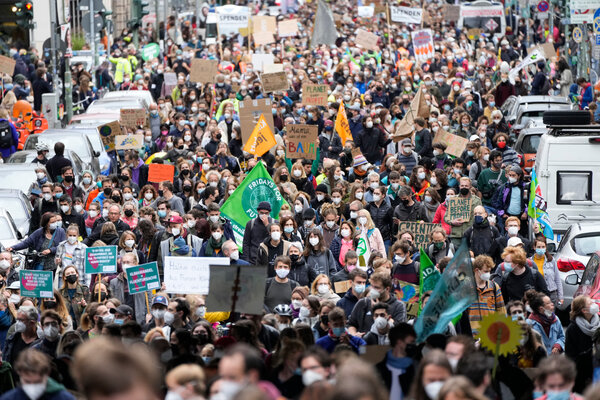 BERLIN — Hundreds of thousands of young people around the world on Friday returned to the streets demanding action to halt the warming of the planet, many for the first time since the coronavirus pandemic forced them into lockdowns.

Protesters gathered in Bangladesh, in Kenya, the Netherlands and in many other countries. But nowhere was the call to action more urgent than in Germany, where an estimated several hundred thousand people turned out in more than 400 cities, putting pressure on whoever wins a national election Sunday to put climate protection at the top of their agenda.

Greta Thunberg, the 18-year-old climate activist who started the Fridays for Future protests in Stockholm in 2018 by skipping school as a way of shaming the world into addressing climate change, made a guest appearance at a protest in Berlin.

“Yes, we must vote and you must vote, but remember that voting will not be enough,” she told the crowd, urging them to stay motivated and keep up the pressure on politicians.

“We can still turn this around. People are ready for change,” she said. “We demand the change and we are the change.”

People of all ages marched through the center of Berlin, then rallied on the lawn before the Reichstag, where Germany’s Parliament meets. Thousands turned out for similar protests in other cities across the country.

Germans will elect new representatives to Parliament on Sunday, and never before has the issue of climate change played such a role in a German election. Despite entering office with ambitions to reduce carbon emissions in 2005, four successive governments under Chancellor Angela Merkel failed to significantly reduce Germany’s carbon footprint. It remains in the top 10 of the world’s most polluting countries, according to the World Bank.

It has been young climate activists, inspired by Ms. Thunberg, who have succeeded in bringing the climate debate to the forefront of Germany’s political discussion. This year, they successfully took the government to court, forcing a 2019 law aimed at bringing the country’s carbon emissions down to nearly zero by 2050 to be reworked with more ambitious and detailed goals to reduce emissions through 2030.

Recent polls have shown the next German government could include left-leaning environmentalists who many hope will bring real change. The Social Democratic Party has been in the lead for several weeks, ahead of the conservative Christian Democrats, with the Greens firmly in third place, raising hopes that whichever party wins will include them in the next government.

But some young Germans are concerned that even the environmentally focused Greens may not enact policy aggressively enough to speed up Germany’s exit from coal, currently set for 2038. They are also demanding that Germany speed up its plan to reach climate neutrality, when net carbon emissions hit zero, 10 years earlier than planned, to help limit global warming to 1.5 degrees Celsius, the lower boundary defined in the Paris Agreement.

“The last few months have shown how dishonestly the parties have been campaigning on the climate crisis, without even beginning to advocate sufficient measures to combat it,” said Maia Stimmimg, a spokeswoman for Fridays for Future Germany.

“As one of the main polluters, Germany must finally stop the destruction,” she said. “Without massive pressure from us on the streets, no coalition will keep the 1.5-degree limit after the election.”

Alexandra Petrikat, an entrepreneur and mother of two young children who attended the demonstration in Berlin, said she was impressed by how peaceful and respectful the protesters were. At the same time, she said their message was loud and clear.

“I think that we sent a signal that whoever forms the next government can’t close their eyes to our demands,” Ms. Petrikat said. “We will not give up. We will keep growing and we will keep up the pressure.”