The ludicrous scene has been captured on video as every twenty minutes an international carrier belches fumes over residents’ washing lines. Up to 50 such planes take off every day from the Essex airport – one of five which serve London. They begin coming at six in the morning and don’t stop until 11 at night.

One pensioner, June Marchant, claimed that she no longer has barbecues in her otherwise picturesque garden due to the booming engines of planes that loom over her quaint bungalow.

She added that she has to “pause the TV until the plane has gone past”.

Ms Marchant says the problem began in November 2017 when the airport – which has stood in various forms since 1914 – rehabilitated its ‘Charlie Taxiway’ which is the route used for planes taking off from the eastward runway.

One morning Ms Marchant opened her curtains and said to her partner: “There’s a bloody great jet in our garden!” 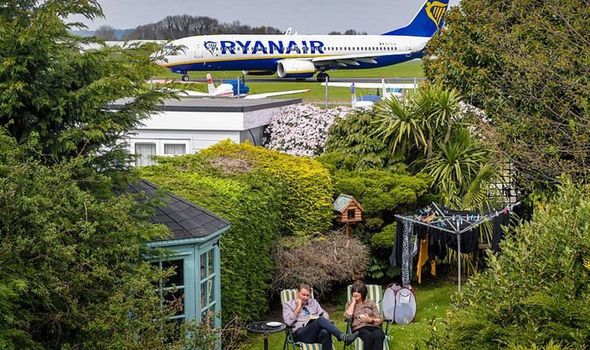 She says the constant noise and smell of fumes from the aircraft has made the lives of her and her neighbours on Wells Avenue a misery and even claims that it is making her partner ill.

She explained: “You can’t have a conversation in the garden with anyone because you can’t hear them.

“And when we are inside with the door closed we have to pause the TV until the plane has gone past.

“We worry about our grandchildren coming around and the enjoyment of having people over for BBQs is ruined.

“I love my garden and used to do a lot of gardening but now it is all spoiled with the noise and the smell.”

She was also concerned about the potentially crippling effect it could have on the value of the house.

She said: “You do worry if you have a house viewing and there’s a huge plane sat at the bottom of the garden.

“Every plane is legitimate but it’s a nuisance, is it morally right? I don’t know what to do, I have done everything.

“My partner’s breathing is now not so good and my neighbours say they can’t sit outside or open their windows at certain times of the day.

“Yesterday there were about 10 that went past and one was sat waiting for about 10 minutes before it took off and it was incredibly noisy.

“It can’t be good for your health.

“We aren’t against the airport but this is the most convenient and cheapest option for the airport.”

One neighbour, Alex Carr, said that the earth-shattering noise was not the worst problem.

He explained: “The noise can be horrendous even when you are inside with the doors and windows shut but it’s the smell that is really unacceptable and you can even taste it at times.”

The airport website states that there were quarterly consultations with residents.

A spokesman from Southend Airport said: “London Southend Airport is very proud of both its long heritage, having been an airport since 1914, and the important, positive role it plays in the community.

“We appreciate that the Wells Avenue properties were built close to the Charlie Taxiway, and are currently engaging with those residents through quarterly meetings and are actively investigating active measures to reduce noise.

“The airport has ambitious plans to grow, and will continue to work closely with the CAA to ensure the airport remains safe and environmentally responsible for all our stakeholders.

“We have recorded and investigated over 430 individual complaints and found that in every case, the aircraft concerned was operating normally, legitimately and within the Airports operating framework.”