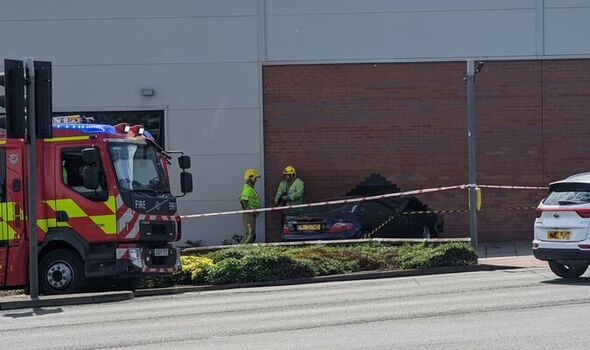 Photographs show the black car partly through a wall at the supermarket at Kingsmead Retail Park in Stafford. At least two fire engines have been spotted outside the store and an ambulance is thought to be present.

A cordon has been put in place around the scene of the collision.

The shop itself has had to close. A sign pinned to the entrance reads: “Due to a road traffic accident, the store is currently closed. Sorry for any inconvenience. Team Aldi.”

One worried shopper, who didn’t want to be named, said: “I didn’t see it happen as I was round the corner but I think I heard the sirens. I hope everyone is OK.”

A West Midlands Ambulance Service spokesman said paramedics were called to the scene just before 1.30pm to reports of a collision.

The spokeswoman added: “We sent two ambulances and a paramedic officer to the scene.

“Crews treated a man and woman from the car for injuries not believed to be serious and they were conveyed to County Hospital, Stafford, for further treatment.”

Other shops at the retail park, including Pets and B&M, are open despite the emergency.

Firefighters were called to a road traffic collision at around 1.30pm.

A spokesperson for Staffordshire Fire and Rescue Service said crews from Stafford and nearby Rising Brook were called to an accident, in which a vehicle has crashed into a wall.

Staffordshire Police have released a statement on today’s collision. A spokesman has said a collision occurred between two vehicles before the crash into the wall at Aldi.

He said: “Police were called to Kingsmead Retail Park in Stafford at 1.30pm today following reports of a collision.

“A blue Mercedes and a white Mini Countryman had been involved in a collision, before further colliding with the wall of a commercial premises. Police attended alongside colleagues from Staffordshire Fire and Rescue Service and paramedics from West Midlands Ambulance Service.

“The occupant of the Mini sustained minor injuries. Police remain at the scene.”