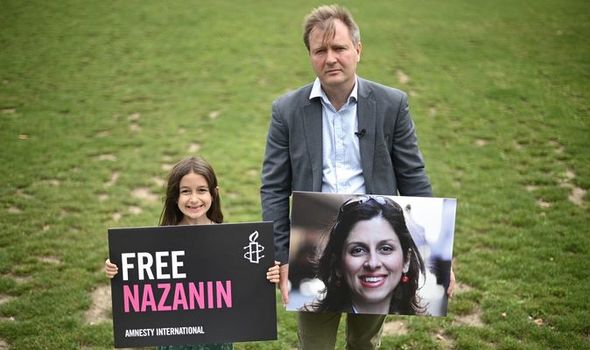 EVERY Christmas, Gabriella Ratcliffe’s letter to Santa Claus has contained one special wish. Along with the toys, books and games, at the top of her list has been a plea to Father Christmas to magic her mother back home. But this year there was no such plea, because – despite her tender years – the seven-year-old has come to understand that no one, not even Father Christmas, can make that particular wish come true.

Throughout the six long years her mother Nazanin Zaghari-Ratcliffe has been held in Iran, first in prison and now under house arrest, no one has been able to resolve the family’s heartbreaking ordeal. So for yet another year, Gabriella will have to settle for a Skype call with her mother on Christmas Day instead of the hugs and kisses she craves.

On Monday evening, Gabriella, her father Richard and supporters of the campaign to free Nazanin sang carols opposite the entrance to 10 Downing Street to keep her memory alive and raise awareness of her plight. “This is our third prime minister we’ve been singing to and hopefully we will not be here again next year,” Richard told the crowd.

He had hoped that his wife would be allowed to return home in March when she had served her five-year prison sentence on trumped up charges of “plotting to topple the Iranian government”. Nazanin was temporarily released, only to be cruelly accused of a second set of charges for which she was sentenced to a further one-year prison term and a one-year travel ban, because she allegedly took part in an anti-Iran protest 12 years ago.

Given her fragile mental state and the risk of Covid, Nazanin is under house arrest at the home of her Iranian parents in Tehran but has been told to expect a summons back to prison any day.

Speaking exclusively to the Daily Express, Richard, 46, still recovering from his recent 21-day hunger strike, says: “Back in the early summer we thought she was coming home and then it all fell away, so all I can say now is that we have an uncertain Christmas.

“I still have a fear that she could go back to prison after Christmas. It is important not to get too up or too down but that can be difficult, especially at this time of year.” However, there has been one highpoint for Gabriella and Richard, when they were invited to contribute to a single, Naz Don’t Cry, with the Liverpool group The Christians.

The band’s original 1991 hit, Man Don’t Cry, was written for ITN journalist John McCarthy, who was held hostage in Lebanon for more than five years. “It was a lovely surprise when the band’s manager got in touch after I’d done the hunger strike,” says Richard, an accountant who has never had aspirations to be a pop star.

“We went up to Liverpool and had terrific fun. Gabriella played the drums and we sang on the chorus at the end but as far as my singing was concerned I don’t think Elton John has anything to worry about. I’m not a good singer, but it was just so nice to take part. It’s a beautiful, hopeful song which has echoes of former hostage cases.

“At the studio we managed to speak to Naz by phone and she got a chance to say hello to the band. It was good that she was able to feel part of it. When John McCarthy, Terry Waite and Brian Keenan (the 1980s Beirut hostages) were being held, I was too young to understand the politics but I remember how happy everyone was when they were released. Hope comes from seeing people come out of the other side of these situations. I met John McCarthy a couple of years ago and he was able to joke about being in solitary confinement.

“It was lovely to meet someone who has been through a dark experience and come through it. He’s a really sunny, upbeat per- son. I took a lot from that meeting because I felt he had healed. It is important for hostages to know they are not forgotten, that there is a rainbow waiting for them. Doing the song was uplifting because it carries the hope that one day this will be over for us.”

McCarthy is delighted the song written for him has been reworked for Nazanin. “Looking at the video has taken me back to seeing things after I came back,” he says. “It’s so moving seeing Richard (on the song’s video) on his hunger strike, it’s very powerful. After a couple of viewings one is in tears.”

Naz Don’t Cry is already racing up the charts and although it is too early to say if it will be the Christmas Number One, it is giving Adele a run for her money. Nazanin’s brother has come over from Iran to live with Richard and Gabriella in their north London home and helps look after his niece, which allows Richard more time for campaigning.

“I grew up in a Christian household but I’m not particularly religious,” confesses Richard. We’ll go to church on Christmas Eve, which will be nice to feel part of the community and then spend Christmas morning at home to see what Father Christmas has brought.”

Then they’ll travel to Fleet, Hampshire, for Christmas lunch with Richard’s father John and mother, Barbara, a stalwart at every campaign event, despite recently being severely ill with pneumonia and Covid. Richard has two brothers, Christopher and Andrew, and a sister Rebecca, a doctor who kept a close eye on his health during his hunger strike.

Barbara says: “I’ve got six grandchildren, so Gabriella has plenty of cousins to play with. We’re all looking forward to getting together but it won’t be the same without Nazanin. Naz’s parents have stayed with us before a couple of times so we know them well. They are a perfectly normal, ordinary couple. We get on so well. They have got three girls and a boy and we have got three boys and a girl. They are kind-hearted people. Naz’s mum has taken some of Gabriella’s old clothes to an orphanage over there.”

On Christmas Day, there will be a Skype call from Fleet to Tehran, so Nazanin can feel part of the festivities. Richard says: “Nazanin is 43 on Boxing Day, so we’ll do another Skype call then with cake to celebrate her birthday. Nazanin gets quite low about three weeks before these landmark events because, of course, she wants to be with us. After Christmas it will be a case of dusting herself down and carrying on. We’ll also be marking the fact another year has passed and it’s been such a messy year with lots of false dawns.”

He is referring to what looked like a breakthrough in November when the Government sent a delegation to Iran to discuss how to pay £400million owed from an arms deal dating back to the 1970s seen as a precondition of the release of British-Iranian dual nationals held in Tehran, including Nazanin.

Iran paid £600million for tanks in advance, but the UK, which had made only part delivery of the arms, refused to deal with the new revolutionary and theocratic regime which deposed the Shah in the 1979 revolution. Richard’s local Labour MP, Tulip Siddiq, was optimistic after recently meeting the Iranian ambassador to London, Mohsen Baharvand. But nothing has moved forward and Richard’s deep frustration is palpable.

“There is both smiling and growling happening, so it is difficult to see how this will go,” he says, trying to avoid saying anything inflammatory about Iran. “Since my hunger strike I sense the Iranians are trying to solve this. There are many pieces in the jigsaw and I cannot yet see the piece which makes the jigsaw all fit together. It is opaque and it is important for me to not get too up or down about it. It is a question of carrying on.”

STILL trying to regain the weight he lost during his hunger strike, Richard moves the conversation on to how he first met his wife. “It was at a conference in London in 2007 and she was over here studying,” he recalls with a smile. “We sat next to each other and got chatting and went for a coffee, then another coffee and a date sprang from that. We got on so well we just wanted to see each other again. Her mum came over six months later and I went to Iran to meet all her family.”

They married in 2009 at Winchester registry office in Hampshire and their lives seemed complete when Gabriella was born. In April 2016, Nazanin took Gabriella to Tehran to celebrate the Iranian new year and visit her parents. As she was preparing to board a plane back to Britain at the city’s Imam Khomeini Airport she was arrested and accused of plotting against the hardline Iranian regime while a project manager for the Thomson Reuters Foundation.

She spent the next five years at the brutal Evin Prison in Tehran. Richard and Nazanin would never have imagined they would spend six painful years apart, with Gabriella facing her third Christmas without her mother after she returned from Iran to the UK in 2019. “Gabriella asks when she’s coming back and why does it have to be my mummy?” says Richard. Not even Father Christmas has the answer to that.