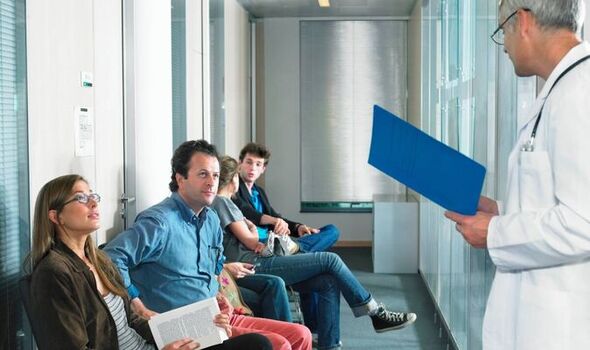 A further 4.3million had to wait more than two weeks. The findings come as worries grow about the difficulty of securing medical attention in England today. There is further concern that GPs on England’s local medical committees have voted to reduce core hours to 9am to 5pm instead of 8am to 6:30pm.

This could now be a key demand when new contracts are negotiated with NHS England.

Carers UK said its own research found “one in five unpaid carers providing care to disabled, ill and older people had waited longer than a month to get a GP appointment”.

Emily Holzhausen, the charity’s director of policy, said it was “deeply concerning” that people were waiting longer to access health services.

She said: “Slower access to GPs can have serious consequences on their health and ability to care. Our research shows that two-thirds of carers (67 percent) waiting for specialist treatment say it is having a negative impact on their mental or physical health.”

Labour shadow health secretary Wes Streeting said: “Among those millions waiting more than a month or not getting an appointment at all, there will be conditions going undiagnosed until it is too late. Patients have no time to wait.”

Mr Streeting said a Labour Government would pay for a “new generation of doctors and nurses” by abolishing the controversial “non-dom” tax status.

He said: “Patients need doctors and nurses more than the wealthiest need a tax break. Patients should be able to see the doctor they want, in the manner they choose, when they need to.

“Labour will put patients first and get them seen on times again.”

Caroline Abrahams, director of Age UK, said the long waits to see a GP were “another manifestation of the acute pressures on all NHS services at the moment”.

She warned that too many older people are “under-served by NHS and social care services at present, despite the very best efforts of the busy staff working in them.”

Ms Abrahams backed efforts to support older people to “stay fit and well in their own homes and in care homes,” saying this would “help GPs and reduce hospital admissions too”.

Dr Kieran Sharrock of the British Medical Association – the doctors’ trade union – last week said there were nearly 1,900 fewer fully qualified GPs than in September 2015. He warned that GPs were suffering from exhaustion and burnout, with doctors quitting the NHS.

Health and Social Care Secretary Steve Barclay said: “We promised to prioritise patients and improve access and that is exactly what we have done.

“I am determined to make it easier for people to get an appointment with their GP practice when they need one and this will allow patients to make a more informed choice about the care they receive.”