Thousands of children with mental health problems are waiting longer than NHS guidelines allow to be seen and treated, a Sky News investigation has discovered.

NHS targets state that children in need of specialist mental health services should receive treatment within 18 weeks of being assessed.

But figures obtained by Sky News have revealed that the target is being breached in thousands of cases.

Children can be referred to Children and Adolescent Mental Health Services (CAMHS) for various reasons, including self-harm, anxiety, eating disorders and suicidal thoughts. 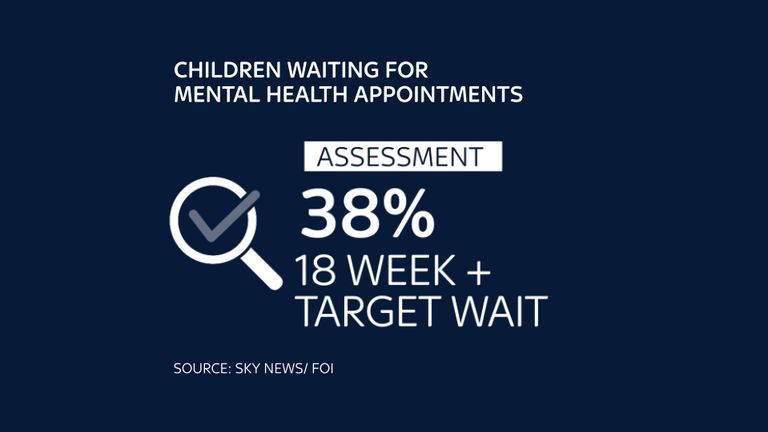 In 2020, almost 31,000 youngsters were referred to CAMHS in England, but 38% of them had to wait longer than the 18-week NHS target to get their first assessment.

Of those accepted into the service, just over a third (34%) waited more than 18-weeks for treatment to begin, our figures show.

Not all NHS trusts replied to our request for information and so the true figures are likely to be greater than this. 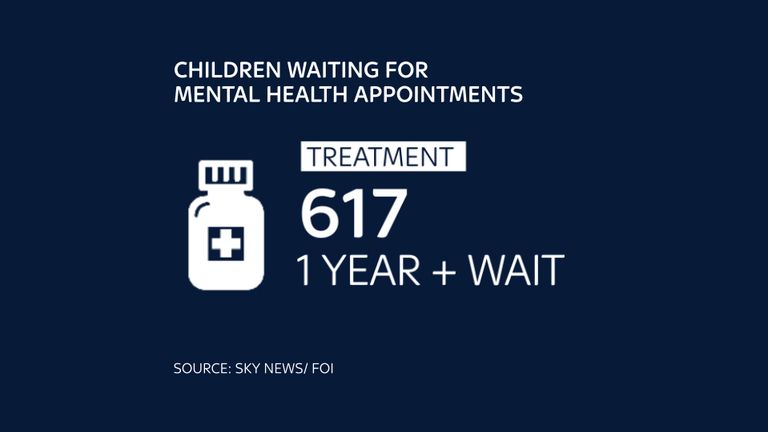 During the coronavirus pandemic, CAMHS services have seen an increase in referrals as the restrictions of the last year take their toll on children and young people.

Sky News was given unique access to a CAMHS service run by Pennine Care NHS Trust, following staff and patients for three weeks to understand more about the pressures they are under.

It is a service which is currently understaffed, and this is leading to a backlog of cases. 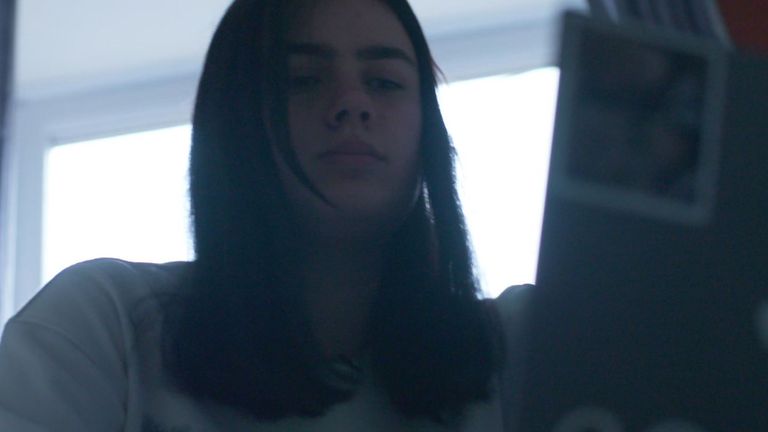 Lila, 17, has struggled with her mental health for a decade, and it worsened during lockdown. For a time, she stopped eating.

And then she began to self-harm.

“Self-harm served as a real sort of a release to me,” she said.

“If I had a bad day at school or just a tough time, I just felt very overwhelmed, [and] those urges would soar.

“I definitely got addicted to self-harm.

“I look back on it now. I definitely do regret it.” 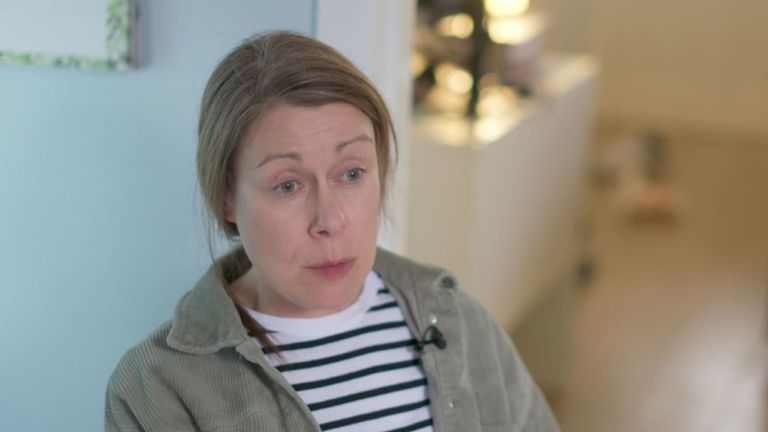 Lila, like thousands of other children this year, was referred to CAMHS, but it was more than four months before she was treated.

Her mum, Kathy, says her daughter’s condition worsened the longer she waited for treatment.

“When you are at crisis point all the help suddenly kicks in,” she said. “But you shouldn’t have to get to a crisis point to be able to receive the service.” 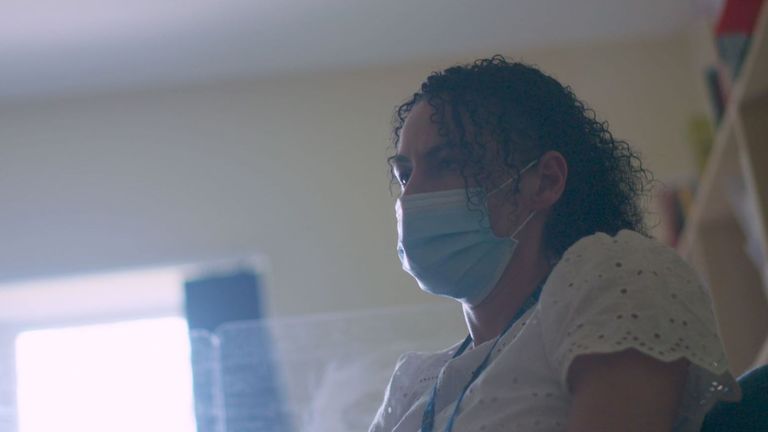 The ‘domino effect’ on staff under pressure

The CAMHS service at Pennine Care NHS Trust is based on the site of the Royal Oldham Hospital, where we revealed children being treated for “unprecedented” levels of distress. It is staffed by mental health practitioners, nurses and psychologists.

Some nurses and senior managers discuss staffing issues while we are there. They are currently a nurse down and that is putting pressure on the others.

One of the nursing staff, Charlotte Dawson, says that even though she enjoys her job, she is feeling the strain.

“It’s having an impact on the staff that are here,” she says. “Because we are under pressure, sickness is really high and it’s having a domino effect.

“It makes you feel that you can’t do your job properly. It feels like a big barrier.” 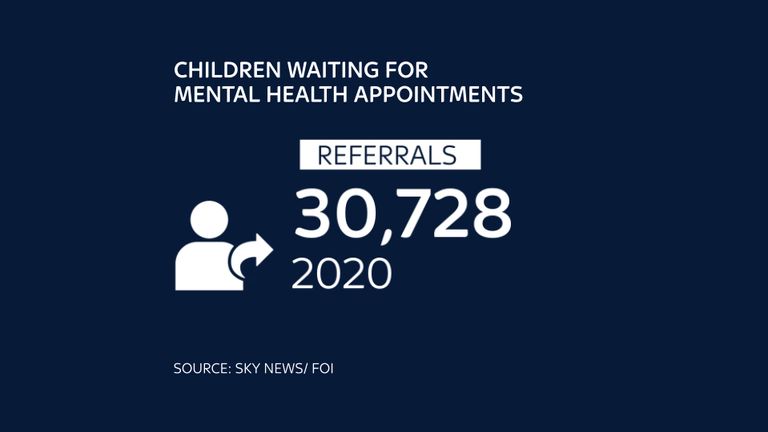 She accepts that CAMHS is under pressure, but not that it is overwhelmed.

“The service is under pressure for so many different reasons,” she says. “Not only have young people experienced something that many people haven’t experienced since the war, they are still going through it.

“Many will have experienced isolation, bereavement, not being able to search and find their identity. That is all crucial to their development and they’ve not had that.

“It is definitely a system under pressure because of referral numbers and because of the kind of mental health needs the population has at the moment.”

Minister for mental health, Nadine Dorries, said: “We are absolutely committed to supporting the mental wellbeing of children and young people.

“Early intervention and treatment is vital, and we are providing an extra £2.3bn a year to mental health services by 2023/24. This is the largest mental health funding in NHS history and will mean an additional 345,000 children and young people will be able access NHS-funded services or school and college-based support, per year.

“Our cross-government Mental Health Recovery Action plan, backed by an additional £500m, specifically targets those that have been most impacted by the pandemic, including young people.

“As part of this, £79m will speed up and expand the provision of mental health support teams in schools, meaning nearly three million children in England will access school or college based support by April 2023.”

But the Royal College of Psychiatrics has argued that the figure should be closer to £500m to combat the issues that have emerged during the pandemic.