The coronavirus lockdowns have taken a steep toll on Paris’s “bouquinistes,” whose bookstalls stretch for miles along the Seine. “We are barely making enough to eat.” 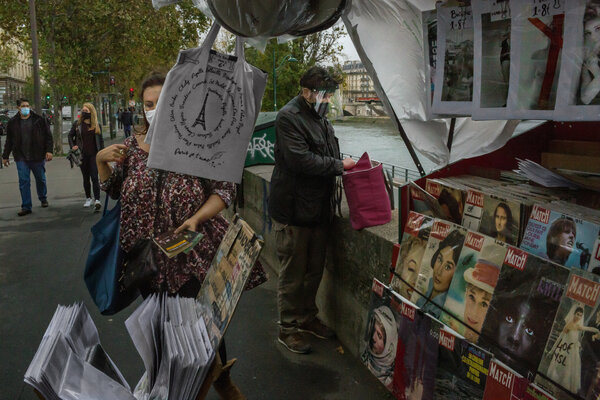 PARIS — On a recent breezy day, Jérôme Callais wrapped a secondhand biography of Robespierre tightly in cellophane, covering the burgundy leather hardcover with an expert flick of the wrist and positioning it near a weighty tome on Talleyrand inside his dark green bookstand on a quai above the Seine.

The sky was a brilliant blue, and the sun cast a rose-hued glow on the gargoyle faces ornamenting the Pont Neuf, not far from where Mr. Callais has sold dusty classics to countless visitors for more than 30 years.

In normal times, Parisiens and tourists from around the world would be browsing his wares, and those of the roughly 230 other open-air booksellers known as “les bouquinistes,” whose boxy metal bookstalls stretch for nearly four miles along the Left and Right banks of the river.

But as lockdown restrictions to curb the coronavirus pandemic keep browsers at bay, the booksellers’ livelihood is rapidly being put in jeopardy. Many are bracing for what they fear may be the final chapter for a centuries-old métier that is as iconic to Paris as the Louvre and Notre Dame.

“We’re trying to keep this ship from sinking,” said Mr. Callais, 60, who is also the president of the Association of Bouquinistes, as he cast a worried eye over rows of shuttered stalls lining the Quai de Conti, above the tip of the Ile de la Cité. “But Covid has made most of our customers disappear.” 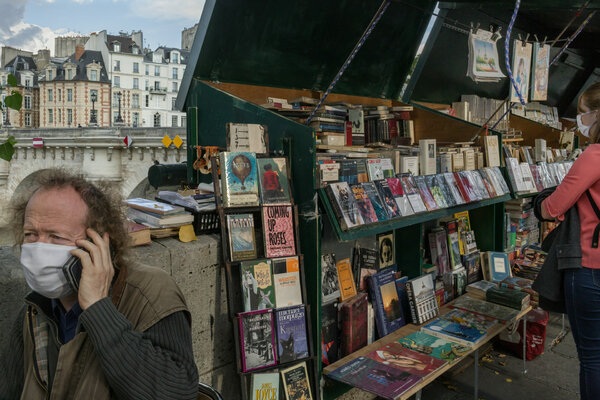 Even before France imposed a new nationwide lockdown last month to combat a resurgence of the virus, the tourists who are a staple of the bouquinistes’ income had largely stopped coming. And the beloved Parisien pastime of flânerie — strolling aimlessly to enjoy life — has been all but snuffed out, stifled by curfews and quarantines that have deprived the booksellers of die-hard clients.

Sales have plunged an average of 80 percent this year, Mr. Callais said, throwing many vendors into precarious straits, especially those who milked Eiffel Tower key chains, Mona Lisa coffee mugs and other kitschy souvenirs over books as cash cows when tourists jammed the quais.

Days go by without any vendors making a sale, and when they do, they’re lucky to pull in more than 30 euros, he said. Over four-fifths of the stands that run on both sides of the river, from Notre Dame to the Pont Royal, are more or less permanently shuttered.

“We are barely making enough to eat,” said David Nosek, a former sound engineer who has sold classic literature, modern paintings and antique lithographs near the Louvre for three decades.

Mr. Nosek is among a few holdouts who tried to stay open despite declining foot traffic. But one Saturday in October before the new lockdown, he closed at the unusually early hour of 6:30 p.m. after selling a single book for 10 euros. In the previous four days, he had sold nothing at all.

All that is keeping him and many of his confreres afloat is a fresh round of government support for ailing small businesses of up to 1,500 euros a month that started in October, after three months of aid in the spring.

But the bouquinistes want to work. They are eager to maintain a tradition that dates to the 16th century, when peddlers hawked “boucquain,” or little secondhand books, along the Pont Neuf bridge from wooden carts and large pockets sewn to their coats.

The profession has faced down hardship through the ages, including intermittent bans under a variety of French kings. In the 1800s, Napoleon finally authorized permanent bookstands on the parapets of the Seine, popularizing the bouquinistes and making them magnets for students, intellectuals and writers like Honoré de Balzac. A vast outdoor library of around 300,000 books is now contained in stalls stretching over 12 quais.

Many of today’s bouquinistes are retirees living on pensions who are eccentric collectors of arcane literature and magazines, mostly purchased from estates and peoples’ homes. They hail from eclectic backgrounds as former philosophy professors, punk rock singers and pharmacists.

A growing cadre of people in their 30s and 40s have joined their ranks, attracted by the freedom of working outside an office in rain or shine and by the creativity of building a literary universe within a tiny space.

Even before the pandemic, the bouquinistes were grappling with the cultural changes that have affected the book business everywhere — like the fact that amid the distractions of technology, people don’t read physical books as much as they used to, and if they do, often turn to Amazon to buy them.

Mr. Callais hopes to do his part to keep the printed word alive. A loquacious man capable of bantering for hours with total strangers, he likes to think of himself as an analog relic of a simpler era, before people hurried by with their eyes glued to an iPhone. There’s a functioning beige landline telephone perched atop his bookstall. Beneath it, he had taped a handwritten sign: “Reading Does Serious Damage to Stupidity.”

Volumes on Ivan the Terrible and Voltaire lined his stalls. Because people can’t live on history alone, he said, he mixed up his selections with musical and nature themes, including books on Glenn Gould, feng shui and the Pyrenees.

“I work the old way,” he declared, his voice muffled through two face masks. “My clients are people I meet on the quais. My bookstand is an oasis of resistance to machines that are replacing everything,” he added. “It’s a philosophy of life, and how we want to live it.”

Mr. Callais does have a cellphone, but he refuses to sell on the internet. Some of his colleagues had “gone modern,” he said, and turned to online sales to help combat slumping income.

Elena Carrera, 30, who opened her stand last year, is part of the Instagram generation now plying the quais.

Ms. Carrera, whose stand features whimsical pins, Asterix comics, vintage Playboys and biographies of Brigitte Bardot, makes about half her sales by posting shots of her wares on her Instagram account. Many of the dozen or so younger vendors who got into the business recently are also making the bulk of their sales online.

“We’re part of the younger generation that got into this because of our love of books, and it’s up to us to keep the profession alive,” Ms. Carrera said.

“But to do that, the bouquinistes need to change with the times,” she added. “We can’t be dinosaurs.”

Mr. Nosek, the former sound engineer, has his own website, and recently created bouquinistesdeparis.com, where his colleagues can upload pictures of their books for worldwide sale. But most older vendors — more than two-thirds are over 60 — don’t have the internet savvy to bump up online visibility, let alone move to the top of search pages dominated by ads for books on Amazon.

Of 300 books uploaded to the bouquinistes’ website so far, only five have been sold, said Mr. Nosek, 67.

“We need to do more,” he acknowledged. Still, he held out hope that the craft would recover, as it had time and again throughout the centuries.

The bouquinistes website, he noted, was emblazoned with the Latin words “fluctuat nec mergitur,” the ancient slogan of Paris, which translates to: “She is tossed by the waves, but does not sink.”

“I never imagined it would come to this,” he said, casting his eyes over the empty sidewalk.

“Still, the bouquinistes have been here since the Middle Ages,” he said. “I’d like to think that the coronavirus won’t finish us off.”