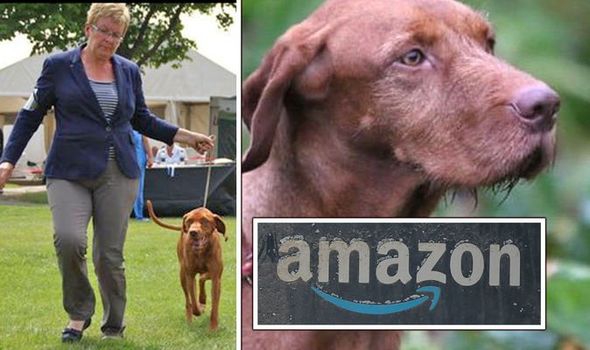 Shirley Cooper, from Norfolk, was left horrified by an Amazon delivery driver who drove away after hitting her pup. Moka, a six-year-old Hungarian wire-haired Vizsla, was left for dead and died just hours after being struck.

Witnesses in the area heard a bang and a scream following the impact, but the male driver continued to leave the scene without checking if Moka was okay.

She was put down by a vet later that day.

Shirley was, understandably, heartbroken by the loss of her canine companion, and she said: “Nothing can replace Moka.

“I was absolutely gobsmacked when it happened.”

The beloved pet was a well-trained show and shooting dog who twice qualified for the Crufts puppy class and won several open shows.

Shirley had hoped that she would deliver a litter of puppies before this occurred.

The tragic incident occurred on November 29 last year, when Shirley was at a shoot on a pig farm, and her dog Moka went to collect a bird.

Recalling the incident, Shirley said: “The van came back from the houses really fast.

“I heard a bang and a scream. I could see the van through the numerous gaps in the thin hedge.

“I ran through a gap in the hedge and one of the guys who had been shooting shouted at the driver, but after momentarily braking he sped off.”

She explains that at first, she was unaware of the extent of Moka’s injuries.

Shirley told The Mirror: “The van driver had gone right over Moka and It was clear that she had at least a broken leg.

“I immediately covered her with my coat in an attempt to stop her going into shock and called my vets to let them know what had happened.”

She also added that the driver could have struck any number of other people and their pets, as “there were 35 people walking across that field with their dogs.”

She added: “It could have been a child on the track.”

The 64-year-old took Moka to the vets for treatment for a broken leg, before being told she had to be put down later that night.

Ms Cooper, who works part-time as an administrator, contacted Amazon about the incident and said she found the company to be “very empathetic” at first.

She claimed: “About two weeks later they responded that the driver was a contract driver and not employed directly by them, and he had referred the matter to his insurance company.”

She adds that after stating the driver “was representing Amazon”, the company “paid the amount of the vet’s bill direct into my bank account.”

An Amazon spokesperson said they had reached out to Ms Cooper to offer their support in the aftermath of the incident.

The spokesperson said: “We have very high standards for our delivery service providers and how they serve customers.

“We are taking this matter seriously and have reached out to Ms Cooper to offer our support.”