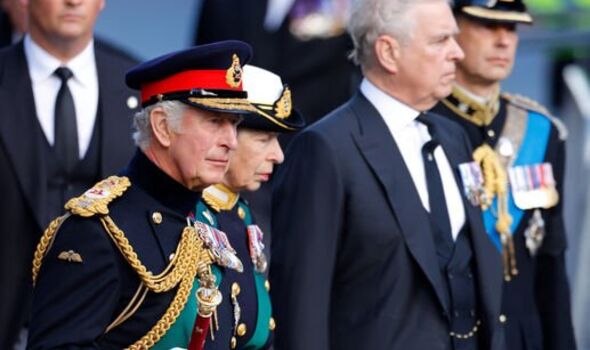 On the saddest of days, thousands of mourners lined the streets of Edinburgh to watch the poignant royal mark of respect.

Draped in the Royal Standard of Scotland and dressed with a wreath of white flowers, the late Queen’s oak coffin was taken from the Palace of Holyroodhouse to St Giles’ Cathedral.

It will remain there until this afternoon to allow people to pay their respects.

Behind the hearse and assembled according to their ages, the Queen’s four children looked straight ahead, expressionless, as they walked with military precision.

Meanwhile, a hush descended on the crowd – 10 rows deep in places – on the journey along the city’s Royal Mile.

Charles, 73, wore full ceremonial uniform of a Field Marshal. His sister, Princess Anne, 72, wore an Admiral’s uniform, while Prince Edward, 58, the Earl of Wessex and Forfar, sported the blues uniform of the Honorary Royal Colonel of the Wessex Yeomanry.

Only Andrew, 62, the Duke of York and Earl of Inverness, was in a morning coat, as he is no longer a working royal.

In bright autumn sunshine, the procession, flanked by a bearer party from the Royal Regiment of Scotland and the Royal Company of Archers – the King’s bodyguard for Scotland – headed for the cathedral.

Behind the Queen’s children walked Anne’s husband, Vice Admiral Sir Tim Laurence. The Queen Consort, 75, and the Countess of Wessex, 57, followed in a car.

In her own special tribute, Camilla wore a diamond thistle brooch given to her by her late mother-in-law around seven years ago. It once belonged to the Queen Mother but the Queen inherited it upon her death in 2002.As the hearse made its way, onlookers held their phones high and women shouted: “God bless the Queen.”

Police arrested a protester who appeared to heckle Andrew as the hearse went past on the Royal Mile. But thousands stood in respectful silence.

Tina Richardson, 63, from Dunbar, whose middle name was Elizabeth after the Queen, said: “She’s like a member of my own family. There’ll never be anyone like her. She was such a beautiful lady who gave us all so much. In good times and bad she was there, especially during Covid. She united everybody.”

Carol Williams, 52, a part-time primary teacher from Dunfermline, said: “I just feel so privileged that we can watch this moment.

“If she died in London, we would never have had this opportunity.”

Private Ben Tubuna, among the Royal Regiment of Scotland soldiers chosen as pallbearers for both yesterday and Sunday, was feted yesterday as news of his involvement spread in his home country.

His father, Semi Tubuna, said: “I was so happy and excited to find out that he was chosen to be a pallbearer.”

“I’m touched that he is not only doing his family proud but his country.”

Fijian MP Ro Teimumu Vuikaba Kepa, the first woman to serve as her country’s leader of the opposition, said: “The young Fijian lad may have not been fully aware of how Fiji cherished the late monarch, but scenes of him performing gave closure to many Fijians watching back home.”

Earlier, King Charles spoke to well-wishers as he made a brief walkabout outside Holyroodhouse when he arrived after flying up from London.

In his first official engagement as King of Scotland, he took part in the historic Ceremony of the Keys on arrival at Holyroodhouse.

The King was welcomed to Edinburgh by Lord Provost Robert Aldridge, inspected a guard of honour and was handed the keys to the city.

By tradition, the monarch returns the keys, entrusting their safekeeping to the city’s representatives.

But last night, the hearts of the city’s people belonged to the new King.