Passenger trains have resumed on the Dartmoor line in Devon for the first time in nearly 50 years.

Jazz singers and a brass band were at Okehampton station to welcome the 6.32am service from Exeter St Davids, which was packed with young families, rail enthusiasts and groups of hikers.

Regular services were withdrawn in 1972, creating what local residents referred to as a “rail desert”. 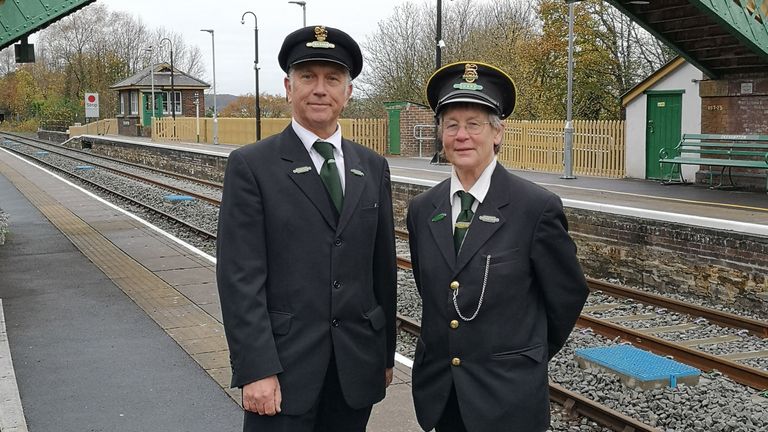 “This is now going to become an oasis for a few hundred thousand people” Sue Baxter, chair of the Dartmoor Railway Association, told Sky News.

Mrs Baxter and her husband Tom run a railway heritage museum on one of the defunct platforms at Okehampton and have been part of a decades-long campaign to reopen the line.

Mr Baxter added: “Everything started to close and it was like the tide going out basically.

“Now the tide’s starting to come back in. It’s taken 50 years but it’s great.”

The line is the first to be reopened under the government’s plans to reverse some of the Beeching cuts of the 1960s and 70s.

More than 6,000 miles of railway and 2,300 stations were closed under the recommendation of British Railways chairman Dr Richard Beeching.

“It opens up a part of Dartmoor that hasn’t been used for a long time,” Stuart Calvert, Network Rail’s capital delivery director, told Sky News. 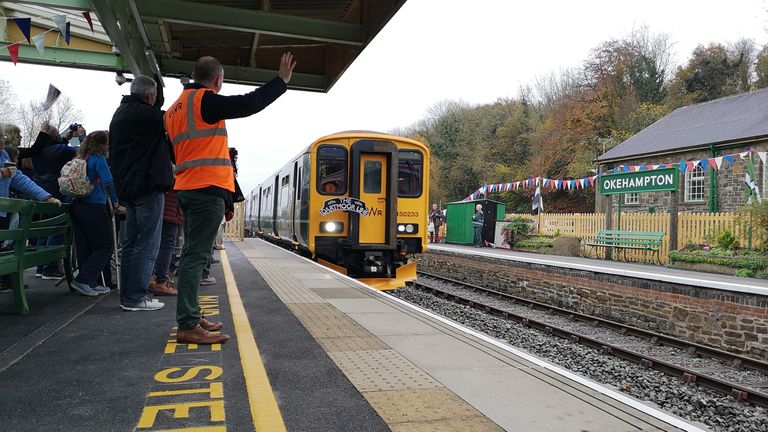 “There’s going to be people wanting to travel into Exeter for shopping and business. There are a lot of students too, and people will be coming back here into Dartmoor and the national park.”

It comes in the same week the government was accused of breaking promises on new rail connections in the north of England after announcing that part of the eastern leg of HS2 between Birmingham and Leeds will be scrapped.

Great Western Railway will operate the 25-mile route, with trains running every two hours, seven days a week. It estimates the service will see 200,000 journeys a year.

Luke Sandercock, a student from Okehampton, was among the passengers on their way to Exeter on Saturday, a journey he’ll make “more than three times a week”.

The 19-year-old told Sky News: “I visit my girlfriend in Plymouth and go to college in Exeter.

“It’s a lot cheaper than the buses and a lot quicker.” 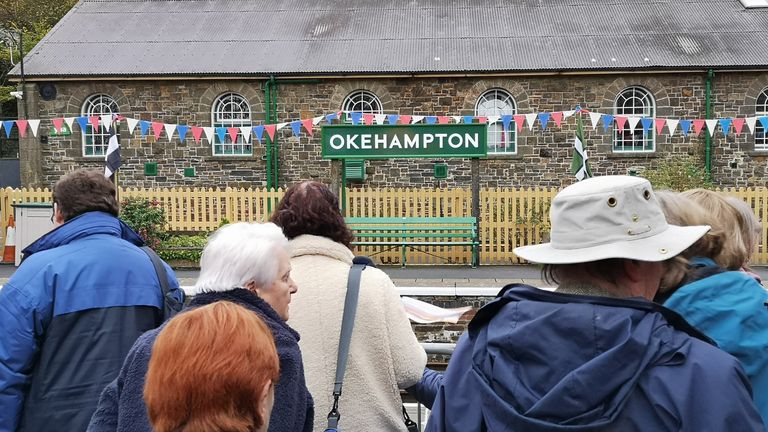 Rosemary Babichev, who was travelling to Bedford for a family party with her 14-year-old daughter Maria, also believes it will be better for the environment.

She said: “I won’t have to make the long car journey to Exeter to collect family members and it’ll be better for my children because they can go to Exeter independently.”

Meanwhile, Sarah Chammings, another Okehampton resident, was travelling with her two young children.

She said: “We’ll be using it to go shopping and things on the weekend. It’s cheaper than driving and parking.”

Local campaigners are now turning their attention to the line west of Okehampton, in a bid to reopen the connection to Bude in north Cornwall.

Mr Baxter said: “It’ll be a challenge but nothing’s impossible.”

However, he added he hopes it won’t take another 50 years, otherwise “we won’t be here to enjoy it”.