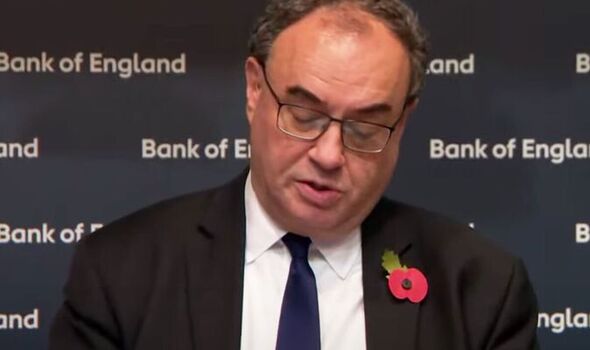 The Governor of the Bank of England has explained why interest rates have been hiked in a bid to avoid economic disaster. The Bank made its biggest interest rate increase in three decades today, boosting its key rate by three-quarters of a percentage point to three percent after consumer price inflation returned to a 40-year high in September.

Mr Bailey, speaking at a press conference after the announcement, said: “Quite simply, we’re increasing bank rate because inflation is too high. It’s the zBank’s job to bring it down. For a long time inflation has been low and stable, most people did not have to worry about inflation. But that has changed. It has changed with supply chain problems after the pandemic, the Russian invasion of Ukraine and the shrinkage of the UK labour force.

“Consumer price inflation now stands at over 10 percent. I know for many people it will feel worse because the prices of essentials like energy  and groceries have risen by much more. People should not have to worry about inflation as they go about their daily business. That’s why we’ve been raising interest rates and did so again today.

“Low and stable inflation is the bedrock of a stable economy, a predictable economy where people can go about their lives and plan for their futures with confidence. An economy where hard earned money keeps its value. If we do not act forcefully now, it will be worse later on.”

Mr Bailey added: “It is a tough road ahead. The sharp increase in energy prices caused by Russia’s invasion of Ukraine has made us poorer as a nation. The level of economic activity is likely to be flat and even fall for some time.

“The economy will recover and inflation will fall… From where we stand now, we think inflation will begin to fall back from the middle of next year, probably sharply.”