Andy Murray has crashed out of Wimbledon in the third round, beaten in straight sets by Denis Shapovalov.

Shapovalov, who is the 10th seed at this year’s tournament, was ruthless in ensuring that there would be no fairy-tale finale to the tournament for Murray, who has suffered terrible luck with injuries in recent years. By winning back-to-back matches at a grand slam for the first time since his hip problems started in 2017, the Briton had Centre Court dreaming of home glories once again.

But Shapovalov was a step up from Nikoloz Basilashvili and Oscar Otte, and Murray was comfortably beaten to complete a miserable day for British players on Centre following Dan Evans’ loss to Sebastian Korda.

Murray made a dramatic return to singles action in the first round on Monday – overcoming a late wobble as he toppled 24th seed Basilashvili in four sets.

He then went on to beat German qualifier Otte in a thriller, which finished under the Centre Court lights as the Scot needed five sets to beat him.

The third round was a step too far for the 34-year-old, who has had a long journey back to the singles court.

Shapovalov had never been beyond the second round at the All England Club, and will face eighth seed Roberto Bautista Agut in the next round. 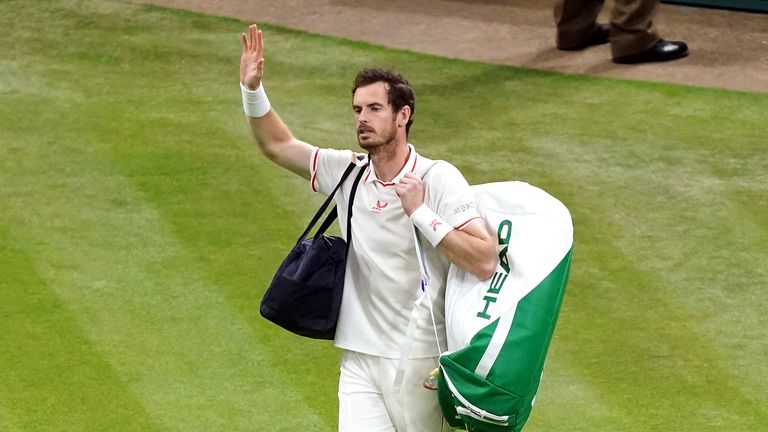 With Evans and Murray now out, it leaves Cameron Norrie as the only British player in the men’s draw.

The British number two continued his brilliant season by beating Alex Bolt to reach the last 32 for the first time and will go head-to-head against Novak Djokovic on Saturday.

In the women’s draw, there is also on one British player left, teenager Emma Raducanu, who stunned former French Open finalist Marketa Vondrousova in straight sets on Thursday.

Raducanu, who is 18 and finished her A-Levels two months ago, will come up against Sorana Cirstea after the Romanian defeated Victoria Azarenka.