Angela Rayner and Ian Blackford both attended the meeting of the Accession Council officially recognising Charles III as the rightful successor of the late Queen. The pair, who are both members of the Privy Council by virtue of their party positions, lined up to countersign the proclamation document to attest the new king had undergone the oath process as witnesses. But as Mr Blackford backed away from the table on which the document was laid to be signed, he accidentally stepped on Ms Rayner.

The Labour Party’s deputy leader could be seen yelping as Mr Blackford’s foot connect with her, and clearly said: “Ouch.”

The unhappy-looking Ms Rayner then exchanged a few words with the SNP chief before her expression turned humorous over the accident.

The two politicians were joined by hundreds of political figures old and new and senior civil servants to witness to official accession of Charles III.

Lord President of the Council Penny Mordaunt led the proceedings in the two-part ceremony, with Prime Minister Liz Truss, the Prince of Wales and Camilla, the Queen Consort taking centre stage in the first half. 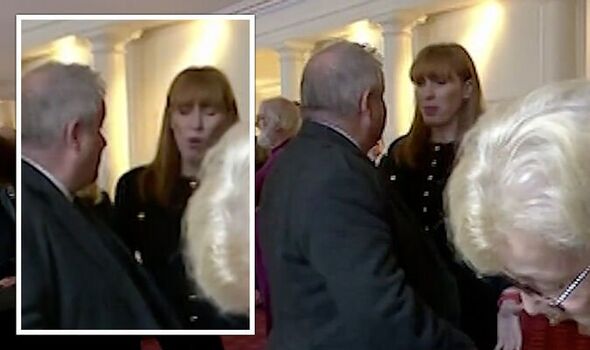 The king joined the Privy Council members in the throne room at St James’s Palace to swear his oath and authorise an initial round of decisions, including making the day of the Queen’s State funeral a bank holiday.

Her Majesty will be travelling back to London on Tuesday after laying at rest in the Palace of Holyroodhouse and a memorial service for the family at St Giles’ Cathedral.

She will then be laying in state from Wednesday until the day of her funeral on September 19, 2022.

Senior members of the Royal Family including the King, will hold continuous vigils from 7.20pm on Monday known as the Vigil of Princes.