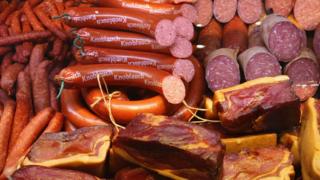 Germany’s Interior Ministry has said it regrets serving pork sausage at a conference on Islam in Berlin earlier this week.

The ministry said the food selection had been designed for the “diverse religious attendance” at the German Islam Conference in Berlin.

But it apologised “if individuals felt offended in their religious feelings”.

The event was led by Interior Minister Horst Seehofer, who in March said Islam “does not belong in Germany”.

Most of the attendees at the Islam conference were Muslims, local media reported. Under Islamic law, Muslims are forbidden to eat pork.

The type of sausage on offer was blutwurst – or “blood sausage” – which is made of ingredients including pig’s blood, pork and bacon.

At the start of the conference, Mr Seehofer reportedly said that he wanted to see a “German Islam”.

But Özdamar added that Mr Seehofer’s “elephant in a china shop” behaviour “would never gain the support of a majority of Muslims in Germany”.

In its response the Interior Ministry added that it had served 13 dishes, including halal, vegetarian, meat and fish dishes and said that all food in the buffet had been clearly marked.

Some German media reported that pork in the form of ham had been served at the first German Islam Conference in 2006.

In his March comments, which were seen as an attempt to win back voters from the far-right Alternative for Germany (AfD) party, Mr Seehofer said Islam did not belong to Germany because “Germany is shaped by Christianity”.

“The Muslims who live among us naturally belong to Germany… That of course does not mean that we should, out of a false consideration for others, give up our traditions and customs,” he said.

However last month Mr Seehofer’s Christian Social Union (CSU) party suffered big losses in the Bavarian elections, with the BBC’s Germany Correspondent Jenny Hill saying its attempt to harden its tone and policies on immigration appeared to have backfired.