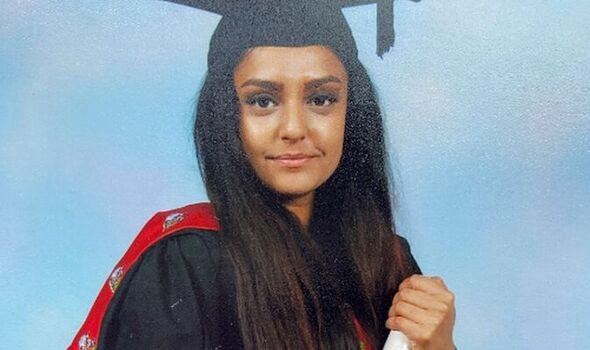 Predator Koci Selamaj, 36, dramatically switched his plea to guilty yesterday after denying Sabina’s murder last year. It spares her grieving family from the ordeal of a trial. But Sabina’s sister Jebina Islam wept outside the Old Bailey as she described their anguish at not getting answers from the killer.

She said: “We are broken and there is not a day that goes by that we do not think of her.

“There are no words to describe the pain we are going through and the pain which he has caused. The fact we will never know the motive for why he killed our sister is not only frustrating but heartbreaking.

“No family should go through what we are going through, and each day is not getting any easier.”

Sabina’s family heard harrowing details of how Selamaj beat and strangled the primary school teacher as she walked through a park in Kidbrooke, south-east London on September 17 last year.

Sabina, 28, was beaten unconscious after the garage mechanic savagely struck her over the head 34 times with a 2ft metal hazard warning triangle.

After suffocating her, the killer removed her tights and underwear and pushed up her clothes to expose the upper part of her body.

The Old Bailey was told by a pathologist there was no evidence of a sexual assault but the killer’s actions demonstrated a likely sexual motive for the crime.

The court heard Selamaj had travelled to London from his home in Eastbourne to carry out “a predatory attack on a stranger”.

CCTV showed how he loitered in Cator Park for 20 minutes before spotting Sabina. She was targeted after she left her home to meet a friend at the Depot pub. Alison Morgan QC, prosecuting, said: “This was a premeditated attack.

“Premeditated not in the sense that it targeted Sabina Nessa, but it targeted any lone female who would have been vulnerable to the attack on the location.”

Selamaj fled after covering Sabina’s body with grass. He drove to Tunbridge Wells, Kent, in his Nissan Micra where he threw the hazard triangle in the River Teise.

The court was told he had put his plan into action by booking a room at the Grand Hotel in Eastbourne, the town where he lived.

The reservation was for the night of September 17. Ms Morgan said he contacted his estranged partner and “attempted to engage her in sexual activity” hours before the killing. It was also revealed Selamaj had regularly beaten his partner, grabbing and squeezing her throat and that she left him weeks before the murder.

A dog walker discovered Sabina’s body at around 5pm the next day. Hundreds attended a vigil in her honour in the following days.

Scotland Yard detectives tracked down Selamaj after examining CCTV of the initial attack. They followed his journeys to and from Eastbourne using automatic number plate recognition cameras.

And analysis of phone movements from Sussex to London and back also provided vital evidence.

Selamaj was arrested when he returned home on September 19.

Helen Ellwood from the Crown Prosecution Service said: “Koci Selamaj has shown little remorse for his premeditated and predatory attack on a lone woman who was a stranger to him.

“His cowardly actions devastated a family and caused immeasurable pain to all those who loved Sabina.”

He is due to be sentenced on April 7.

“How many more women must die?

SABINA Nessa’s murder reignited the fury over safety sparked by the killing of Sarah Everard.

As Sabina joined a long list of victims of stranger killers, campaigners are demanding urgent action to combat male violence.

In a speech shortly after her death, the Duchess of Cornwall, who is patron of the SafeLives charity, said: “How many more women must be harassed, raped or murdered before we truly unite to forge a violence-free world?”

Camilla, 74, urged society to “do everything we can” to end violence against women.

After her murder, Sabina’s relatives told Britain’s leaders and communities to “step up and stand with us and say no more violence against women”.

Detective Chief Inspector Neil John, of the Met Police specialist crime command, said of Sabina’s murder: “The impact was felt not just across the capital, but throughout the country.

“Some people have said Sabina was simply in the wrong place at the wrong time. I do not agree with that.

“Sabina had every right to walk through the park that night.

Crime statistics show that on average, one woman is killed by a man every three days.