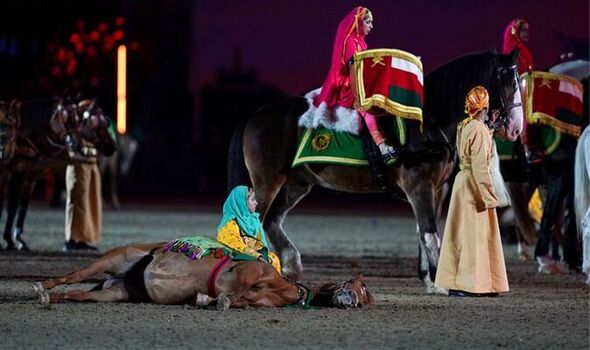 The Royal Windsor Horse Show was broadcast on Sunday night as part of the Queen’s Platinum Jubilee Celebration on ITV. The celebration event took place in front of a live audience of 4,000.

As part of the performance, thousands of performers from across the world, including famous faces such as Helen Mirren, all come together to pay tribute to The Queen’s 70 years of service. Phillip Schofield and Julie Etchingham were also in attendance, delivering the event to the nation from an on-site studio hub outside the grounds of Windsor Castle.

Despite the wide variety of entertainment, it was the performances with the horses which sparked concern from viewers watching at home, as well as disappointment that the show aired on Sunday night was an edited selection of highlights from the week’s events, instead of a live broadcast.

According to Yorkshire Live, one viewer, @crowther_sue Tweeted: “Cruel to the horses. I’m switching over. #QueensJubilee.” Another echoed her sentiments, @loggy01 posting: “Not keen on seeing horses be made to lie down like that. #queensjubilee.”

@wendywooto wrote: “Why couldn’t ITV show this live on the actual nights it happened? Instead of the shoddy edited version on one night. #queensjubilee.”

@BeddoesJill commented: “Had been looking forward to this but what a disappointment. It’s messy and boring quite frankly #queensjubilee.”

@Matts_Tweeting said: “So this performance isn’t live and is possibly mashed together from the whole week’s performances.”

@langtoftlad revealed: “#queensjubilee I saw the show on Friday… this ITV broadcast isn’t it. It’s out of sequence, missing segments Making no sense And certainly isn’t “live” What a disappointment.”

@Pinkmango72 asked: “I’m confused, is this live or not? The section with Philip in had ‘live’ on the screen but now that’s gone and the clip of Princess Anne seemed to be from yesterday?”

While @michellevarney added: “#queensjubilee ITV should hang their heads in shame for producing this complete rubbish.”

In addition to the displays that sparked concern over animal welfare, viewers didn’t seem to enjoy the fact that Phillip Schofield and Julie Etchingham chatted to a number of celebrities, including A-lister Tom cruise, before the Queen’s arrival.

However, once the celebration started, viewers were happy to see that the Queen was sitting in the royal box with a huge smile on her face and enjoying the celebration being hosted in her honour.