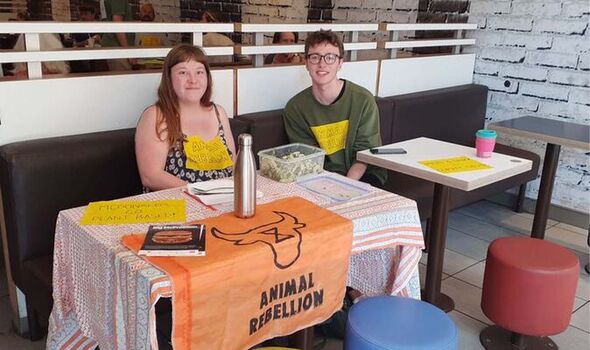 Branded a ‘McSit-in’, members from AR took their own lunches and occupied areas of the fast-food chain for three hours on Saturday  (May 28), insisting that the McDonalds chain transitions to a fully plant-based menu. The protest follows a similar sit-in held in Exeter last summer, as well as in other towns and cities across the country. Activists demanded that the fast-food chain does more to reduce its impact on the climate.

Facebook users responded with mixed opinions to the action with many pointing out the company already sells vegan alternatives.

Sabrina Stell wrote: “Don’t McDonald’s already do the Mcplant? Unlike many places they’re catering for a vegan diet. Be grateful and stop dictating to other what they can and can’t eat.”

But Catherine Sleigh commented: “It’s destroying our world. Plant based burgers can be indistinguishable from meat. Things have to change!”

The Exeter-based group is part of the AR movement that uses non-violent civil disobedience to bring about a transition to a just and sustainable plant-based food system, Devon Live reports. They believe a plant-based food system is necessary to halt mass extinction, alleviate the worst effects of climate breakdown and ensure justice for animals.

Phil Sleigh, a local climate activist and member of AR Devon, said: “The final part of the latest IPCC report told us that we are in a ‘now or never’ situation, and that emissions must stop rising by 2025. That’s 30 months away!

“The meat and dairy industries are responsible for 80-90 percent of Amazon deforestation, at least 18 percent of global emissions… To save ourselves and the future of our children, we must start transitioning towards a plant-based food system.”

The Animal Rebellion group were supported by the Exeter Extinction Rebellion drummers, who drew a crowd by playing outside the High Street branch

Great, peaceful action. McDonalds and all companies that are the main drivers of deforestation of the planet, and the killing of billions of animals should be taking action to end it.

Phil Sleigh said: “McDonald’s and the wider intensive animal agriculture industry is responsible for huge levels of deforestation, and is a major driver of climate change. Investigations have shown that McDonald’s livestock feed comes from deforested areas of Brazil and Bolivia.

“We want to be clear that we are not criticising individual diet choices. We are targeting the McDonald’s corporation, and not it’s customers or staff. We want McDonald’s to adopt a more responsible business model – one that is better for our planet and also for people’s health. You can barely taste the difference between a plant-based burger and a beef burger, but the difference in impact on our planet is enormous.

“As the biggest fast food corporation in the world, McDonald’s has a responsibility to lead the way to a more sustainable future.”

According to McDonald’s, however, the company has made big strides in recent years regarding their sustainablility. On their website, the company state that:

A spokesperson said: “When we fail to protect forests, climate change effects worsen, critical biodiversity is lost and livelihoods and human rights are threatened – as are the natural ecosystems that we all rely on for the food we eat. Which is why supporting deforestation-free supply chains and promoting forests as a climate solution is not just our responsibility, it is core to our business.”