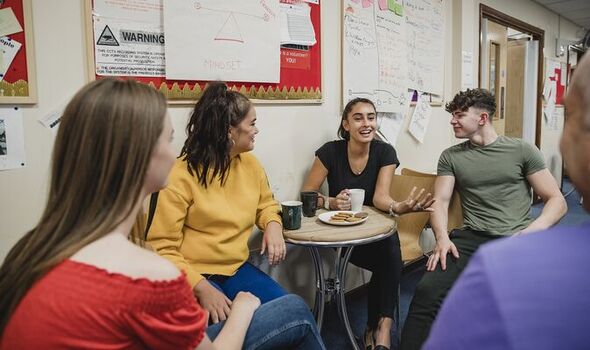 This month, Anne Longfield will help launch a groundbreaking pilot project where troubled youngsters at risk of exclusion and exploitation will be supported to stay in education. The revolutionary scheme is currently being examined by senior officials at the Department for Education. If successful it could be rolled out across the country.

It is designed to prevent them slipping out of the education system when they are at risk of being targeted by sexual predators and criminal gangs.

Its launch comes amid concerns that lockdowns provided opportunities for the criminal exploitation of children, many of whom became exposed to domestic violence, addiction and parental mental health problems.

It also follows a report revealing there are now up to 100,000 “ghost children” – youngsters who are no longer attending school or only turning up sporadically.

The report – Lost But Not Forgotten – from the Centre for Social Justice, found more than 700 schools are now missing an entire class worth of children. Campaigners warn that the “chance of becoming involved in the criminal justice system rises by 400 per cent once a child has been excluded from school”.

In a recent statement Amanda Spielman, Ofsted chief inspector, warned that the authorities have “no handle” on these missing children, “where they are or what they are doing”. Ms Longfield added that these children are now at risk of being targeted by county lines drugs gangs.

The pilot project is being set up in Croydon, south London, near the site of the murder of 15-year-old Zaian Aimable- Lina, who died in an unprovoked knife attack last December.

If rolled out across the country, future proposals would see schools opened up in the evenings and weekends, to be used as youth centres.

Ms Longfield said: “Essentially more vulnerable teenagers have been disengaged during the pandemic and are now at further risk of violence, exploitation and harm. We know 100,000 haven’t returned to school or are only going in sporadically.

“We need to take action and create good opportunities and safe places for them to go in their communities, with adults they can look up to and trust.

“This could involve projects like the Zaian Youth Centre but it could also mean schools opening up after normal hours, weekends and holidays – with sports, arts, play schemes and youth groups.

“This would require new funding and an army of volunteers to run activities, as well as mental health support, including drop-in hubs for older children.”

Ms Longfield, who was appointed Children’s Commissioner for England in March 2015 and succeeded at the end of February 2021 by Dame Rachel de Souza, added: “Over the past decade we have seen an increasing number of teenagers experiencing a conveyor belt of extra-familial vulnerability, conflict, exclusion, exploitation, care and custody.

“It is an epidemic of harmful exploitation involving tens of thousands of young people. It brings misery, destroys their lives and often their prospects – it is a constant horrific discovery.

“It has been fuelled by gangs and county lines criminals seeking to exploit young people.They are ruthless and very talented at spotting vulnerable children. We need a ring of protection around these children and their families.

“The successive lockdowns have only exacerbated these problems. Unless these children are brought back to education or training a grim future awaits them.”

Over the last decade youth services have been cut by 91 per cent across more than 100 councils. It is believed areas that have seen the largest spending cuts have suffered the largest increases in knife crime.

A 2019 report by the All Party Parliamentary Group on Knife Crime found a 51 per cent fall in the number of youth centres supported by councils since 2011 – as well as a 42 per cent drop in youth service staff over the same period.

The groundbreaking youth scheme has been launched by Oasis, a charity that has been pioneering work in the most disadvantaged communities for 35 years, with the help of Anne Longfield’s Commission on Young Lives.

Its research shows that even before Covid hit in March 2020, almost 15,000 children had been referred to social services where gangs were a factor in their assessment, a rise of 4,000 in just a year.

Its analysis also shows there are now more than one million children growing up with reduced life chances.

Steve Chalke, founder of Oasis, which is helping set up the new youth project, said: “We need revolutionary joined-up thinking to tackle the problems of today’s troubled or vulnerable youngsters.

“We know violence and crime is often linked to poverty or school exclusion and the chance of being involved in the criminal justice system rises 400 per cent once a child has been excluded from school.

“We need strategies to keep children in school or education. We need an alternative for children in tough situations who may have fallen through the cracks, to create new pathways so they can thrive and their life chances are not ruined.”