Anti-monarchist Jacki Pickett faced an onslaught from her neighbours in Muir of Ord, a small village in the north of Scotland, after she released a video on social media of her in front of her fish and chip shop celebrating the death of Queen Elizabeth II, popping champagne and dancing as she held a sign saying ‘Lizard Liz is Dead and London Bridge has fallen’. A furious mob quickly gathered outside the Jaki Fish and Chip Shop and booed and berated Ms Pickett. It was reported that eggs were pelted at the storefront and the police were called to disperse the crowd and forced to shut the shop over concerns for the owner’s safety. After the death of Her Majesty on Thursday afternoon, the nation is in mourning, with flowers and messages of condolences laid outside royal residences from Buckingham Palace to Balmoral Castle. 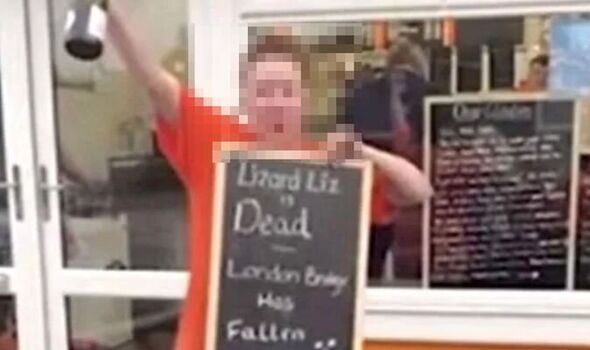 In the video released by Ms Picket, the fish and chip shop owner can be seen in an orange top and black and white chequered trousers holding a blackboard sign that reads: ”Lizard Liz is Dead and London Bridge has fallen”.

Ms Pickett appears elated at the news of Her Majesty and can be seen dancing as she says: “London Bridge has fallen. Woohoo!”

The woman behind the camera screams “fantastic” as Ms Pickett struggles to handle her bottle of champagne. Ms Pickett then proceeds to spray her bottle in one hand and scream: “Lizard Liz is Dead, wooo!”

Ms Pickett appears to have deleted the video from Facebook but that has not stopped members of the public issues poor reviews of her restaurant online and slamming her position on Her Majesty.