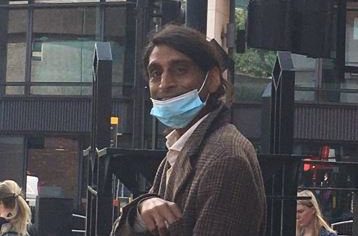 A conspiracy theorist vandalised bus stops with messages such as ‘Jews and gays are grey aliens’, a court has heard.

Nicholas Lalchan defaced 17 stops in London, causing £100 worth of damage each time, plus the windows of an accountancy firm, jurors were told.

He admits criminal damage but denies any religious or racial motivation.

Prosecutor David Patience said the graffiti ‘was daubed on bus stops in areas of north-west London, which have large Jewish communities, such as Edgware, Hendon, and Finchley’.

He said it ‘encouraged people to make searches on the internet’ which would make them ‘think badly’ of Jewish people and potentially believe in outlandish conspiracy theories.

Mr Patience said: ‘They were seen by Jewish people and non-Jewish people who were distressed by what they saw and reported it to the police.’

A still image of the culprit was recognised by a community support officer leading to the defendant’s arrest at his home in Edmonton, north London.

At the time, he was carrying a backpack containing black marker pens and leaflets saying similar things as the graffiti.

A search of his home produced more leaflets and pens and a USB stick containing material making reference to Jewish people and conspiracy theories, it was alleged.

In police interview, Lalchan made no comment but did provide a sample of his handwriting which was compared to the graffiti.

On being told he was being charged, he allegedly said: ‘New world order. The fourth Reich. We will see.’

Lalchan, of Edmonton, was charged with racially and religiously aggravated criminal damage,

He was also charged with possessing a marker pen with intent to cause criminal damage and stirring up racial hatred.

The 47-year-old is facing trial at Aldersgate House in the City of London — a Nightingale court set up to help ease the Covid backlog.