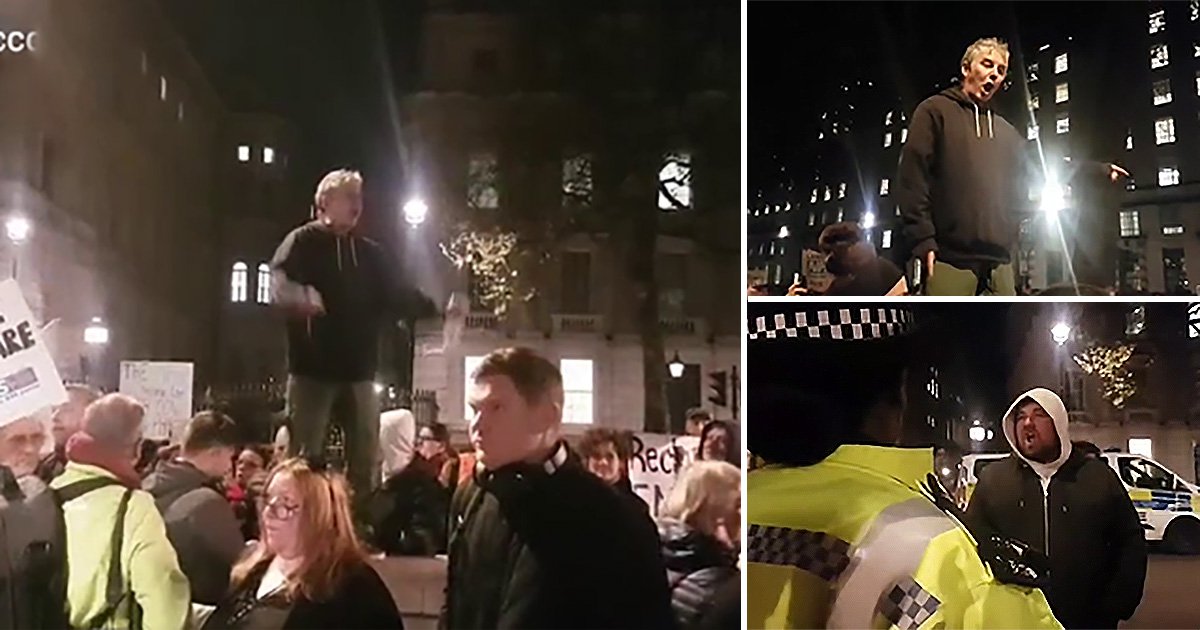 Campaigners say the legislation – which will be voted on by MPs for a third time today before it goes to the House of Lords – will privatise the health care system.

Doctors and MPs were among hundreds who braved the cold to demand ministers axe the reforms, which the government says will better integrate the health care system.

The protest outside Downing Street was organised by union Unite with the support of Labor, who claim the new bill ‘is a Trojan horse for more cuts and cronyism and is a licence for politicians to run down and sell off our NHS’.

The rally faced some disruption as anti-vaxxers chanting ‘no vaccine mandate’ tried to drown out speeches during the event.

Piers Corbyn was among the mob who heckled his brother, ex-Labour leader Jeremy, who had turned up in support of the NHS workers.

Jeremy Corbyn told the group: ‘Whatever views you have or do not have on vaccines you need the NHS just like everybody else…. shut up.’

One video shows a man from the anti-vaxx crowd bellowing ‘no tyranny.. no Austria, no Germany’ as a member from the NHS rally tries to give a speech about the bill.

Last week, Austria announced a national lockdown and made vaccines mandatory for all members of the population – a move which Germany is now considering in response to the fourth wave sweeping mainland Europe.

The anti-vaxxers also expressed their anger over plans to make the jab mandatory for all NHS frontline staff from next April.

But they were shooed away by members from the NHS rally, who told them “shut up” and “you’re not welcome here”.’

Tensions rose as the two groups appeared to briefly start shoving each other.

Members of the NHS rally asked the anti-vaxxers to protest elsewhere, but the crowd refused to leave and said they were exercising their democratic right.

A man tells them: ‘I support your protest.. I support all NHS workers, vaccinated or not.’

According to a journalist at the scene, police were called to ‘keep the peace’.

It is not clear what time police were called, but later videos appear to show a number of officers forming a line of defence between the two groups.

The Unite trade union earlier said it had organised the rally as the ‘last chance to save the NHS’ from what it dubbed a ‘privatisation bill’.

The bill as a whole seeks to reform the NHS to make it less bureaucratic and more accountable.

Part of this effort will see new regional authorities called Integrated Care Systems (ICSs) set up across 42 parts of England.

ICSs will be responsible for commissioning and delivering services to patients within their geographical area, rather than one central NHS body, as has been the way since the health service was founded in 1948.

Supporters, including the NHS leadership, believe the bill will reverse some of the changes brought in by the Tories’ disastrous reform law in 2012.

This emphasised ‘competition’ between areas of health and social care, ushering in an era of tendering where private companies provided more services to the NHS.

But Unite says that the ICSs would bring about a ‘complete break up of the NHS as we know it’.

The 42 ICSs will have space for private companies to sit on their boards, meaning they will have a say on the running of who receives contracts, the services it provides and at what cost.

The Kings Fund Think-Tank warned this ‘risks bringing political calculations into decisions that should be made on the basis of patient need’.

There is also anger that the bill scraps the requirement for services to automatically go out to public tender.

Critics say this could lead to existing outsourced work carried out by firms being ‘rolled over’, further entrenching the role of the private sector.

Last night’s rally saw groups including Keep Our NHS Public hand in a 300,000-strong petition against the Bill to Downing Street.