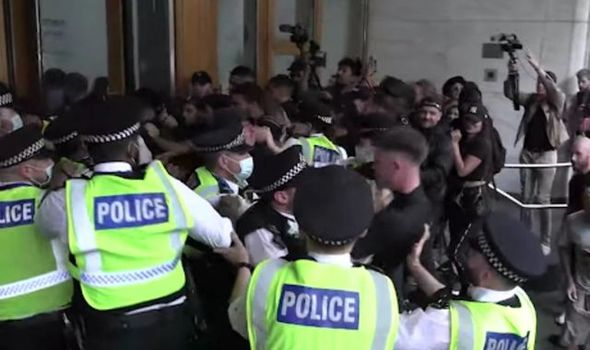 Video footage on social media showed officers forming a line to barricade the front of the building, which is located in Canary Wharf.

However, people were still seen trying to push past the police and enter the building.

Some managed to get through into the building.

The protesters were believed to be trying to gain access to the building that has the Medicines and Healthcare products Regulatory Agency (MHRA) inside.

The protest was also said to be about vaccines for children.

The Met Police confirmed a number of officers had been called to the scene.

They said on Twitter: “We have officers attending a demonstration outside a commercial building on Cabot Square in Canary Wharf.

“A number of officers are on scene, guarding the entrance to the building.”

Several arrests have also been made.

It comes after Education Secretary Gavin Williamson said yesterday that the NHS is “ready and eager” to deliver the Covid vaccine to school children between the ages of 12 and 15.

He added he “hoped” the Joint Committee on Vaccination and Immunisation (JCVI), which the expert body advising the Government on the programme, would soon recommend vaccines for children aged under 16.

He told BBC Breakfast: “A lot of us are very keen to hear that and very much hope we’re in a position to roll out vaccinations for those who are under of 16.

“I’m certainly hoping it’s a decision that will be made very, very soon.”